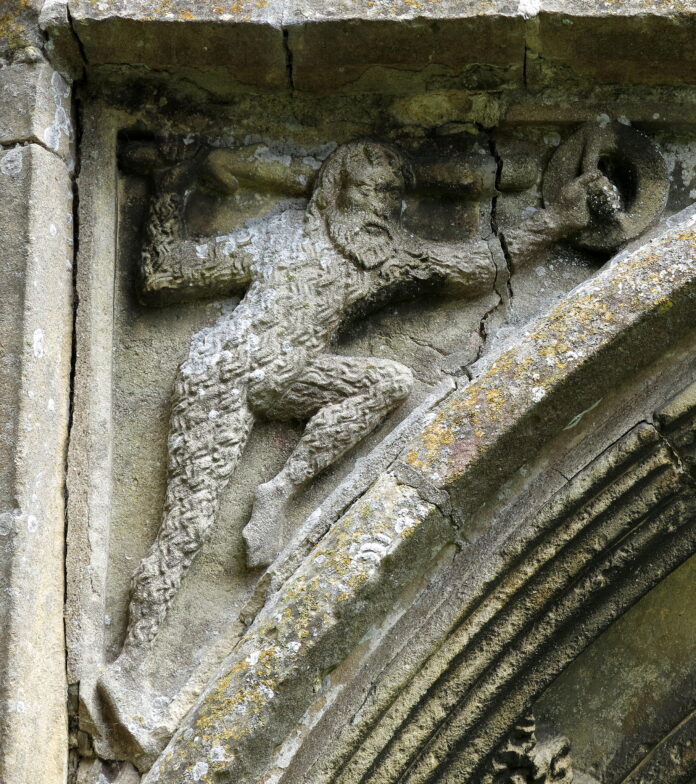 Like the Loch Ness Monster or the Abominable Snowman, I usually think of Bigfoot (or Sasquatch as he’s sometimes known) as a distinctly 20th century phenomenon. However, while it’s true that interest in these legendary creatures was stoked by images captured through the modern means of photography and film, the stories surrounding them actually go back centuries. From the lakes of Scotland, to the heights of the Himalayas, to the Pacific Northwest of America, locals have long attested to the presence of these elusive beings.

Although little-known today, a mythical creature with striking similarities to Bigfoot was believed to exist an even longer time ago in medieval Europe. Called a woodwose, or in Anglo-Saxon wuduwasa, this wild man of the forest was a familiar figure in the literature and visual arts of the Middle Ages.

Walk on the Wild Side

As with Bigfoot, the woodwose’s natural territory was believed to be the forest (hence the name: literally “wood-man”), and it too was said to be a hominoid covered in a heavy coat of hair. However, the woodwose was rarely described as ape-like, as Bigfoot often is. Rather, it was a creature very similar to other humans, but with a wild manner and an unusual amount of hair all over its body.

Different theories have been put forward about the origin of the woodwose myth, including the medieval belief that woodwoses were people who had wandered into the woods, and as a means of survival grew hair to protect themselves from the elements. Another theory was that people born with an excess of body hair retreated from human society and led isolated lives as wild men (and women). In opposition to these ideas, some modern researchers have proposed that woodwose sightings were actually sightings of Neanderthals still living in medieval Europe.

While it is unclear exactly how the image of the woodwose arose, once it entered the public’s imagination it became a common motif in architecture, the visual arts, and literature. For example, woodwoses were often featured in the decoration of medieval churches, most particularly in ceiling bosses, the pieces of sculpture placed at the intersections of overlapping roof vaults. They were also depicted in works of art by such illustrious printmakers as Albrecht Dürer and Martin Schongauer. The medieval writer Geoffrey of Monmouth made mention of a “Man of the Woods” in his epic Life of Merlin, as did the writer of the “King’s Mirror,” a Norwegian educational treatise dating to 1250 CE.

Another phenomenon growing out the woodwose myth was the popular medieval custom of attending masquerades dressed as hairy wild men. The most famous story about this practice concerns an event that came to be known as the Bal des Ardents, or the “Ball of the Burning Men,” which refers to a 1393 ball organized by the then-Queen of France. In preparation for this event, the king, Charles VI and with five other men dressed themselves in costumes made out of linen soaked in highly flammable pitch to which they stuck frazzled hemp fibers to simulate hair. In addition, as part of their get-ups, the six men were chained together. Understandably, flaming torches were not allowed at the event, but the king’s brother nevertheless came near the costumed men bearing a lighted torch. Tragically, one of the men caught fire, and in the panic that ensued, four of the men burned to death, although the king escaped injury. I first encountered a version of the Bal des Ardents tale in Edgar Allen Poe’s short story Hop-Frog.

While the woodwose myth is no longer so prevalent in the public imagination, its influence can still be seen. Two relatively recent examples of this influence are a poem and book written by the British poet Ted Hughes, both titled “Wodwo” (another variant of woodwose), which were published in the late 1960s. Another reference to the woodwose is found in the writings of J.R.R. Tolkien, who called one of his fictional races of men “Woses.”

Regardless of the actual circumstances that gave rise to the woodwose myth, it’s clear that the image of the wild man of the woods has had an enduring resonance in works of art dating back at least as far as the Middle Ages. It’s not surprising that this is this case; like Bigfoot, the woodwose can be seen as a symbol of the distance society has traveled from its primitive roots, but also of our continued attraction to the unknown and wild elements of our own nature.

Note: This is an updated version of an article that originally appeared on Interesting Thing of the Day on April 18, 2007.