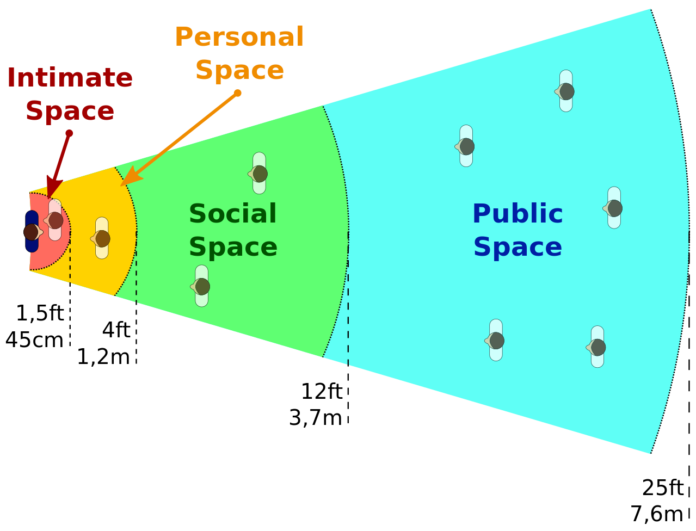 In 1966 anthropologist Edward T. Hall coined the term proxemics to describe the study of how people perceive the proximity of others. Hall’s work was inspired by an animal study conducted by Swiss zoologist Heini Hediger, who found that animals maintained various boundaries depending on whether they were preparing to escape, to attack, to communicate with members of another species, or relating to a member of their own species.

Based on these insights, and after conducting his own research, Edward Hall developed the idea of a set of expanding circles, called reaction bubbles, that described how humans manage the space around them. The innermost circle he identified as Intimate space, reserved for those we are closest to, and usually measuring 6 to 18 inches (15 to 45cm) in radius. The next level up he dubbed Personal space, the distance we are comfortable maintaining with close friends, about 1.5 to 4 feet (0.5 to 1.2m). He used the term Social space to indicate our preferred proximity to acquaintances, about 5–12 feet (1.5–3.6m), and Public space for the distance we need for public speaking, 12–25 feet or more (3.6–7.6m).

This sounds very specific, but Hall himself acknowledged that these distances vary from culture to culture. While those from less-populated countries, or countries where individualism and privacy are highly valued, are more comfortable with larger spaces between themselves and others, in other cultures maintaining what is considered excessive distance can be perceived as rude or unfriendly.

As this video shows, Hall’s work on proxemics goes beyond reaction bubbles, but it is his idea of how we manage the space around us that has had the most long-lasting effect on popular culture.

Don’t Stand So Close To Me

Because in certain situations it is not always possible to keep our preferred distance from others—for example in crowded subway cars or elevators—we learn coping mechanisms to deal with our discomfort. Psychologists observe that individuals in these circumstances often avoid eye contact as a way to minimize the forced intimacy of close quarters. Another strategy we employ, according to psychologist Robert Sommer, is to dehumanize those around us, imagining them as inanimate objects in our personal space instead of the more anxiety-producing fellow creatures they are.

I think these strategies are in play in most large cities and in other situations where it’s is too threatening to acknowledge the close presence of others. My own discomfort is assuaged by passing others anonymously on a crowded sidewalk, or keeping to myself in a cramped airplane cabin. Of course, the illusion of space is shattered when I’m approached on the street, or when the passenger behind me starts kicking my chair. At these moments I feel my blood pressure rise, my stomach clench, and my temper grow short. While this reaction might be appropriate in truly life-threatening situations, nothing is at stake most of the time. Maybe knowing that I am responding only to a perceived threat to my safety will help me to remain calm the next time this happens. Then again, maybe not.

Note: This is an updated version of an article that originally appeared on Interesting Thing of the Day on February 15, 2007.