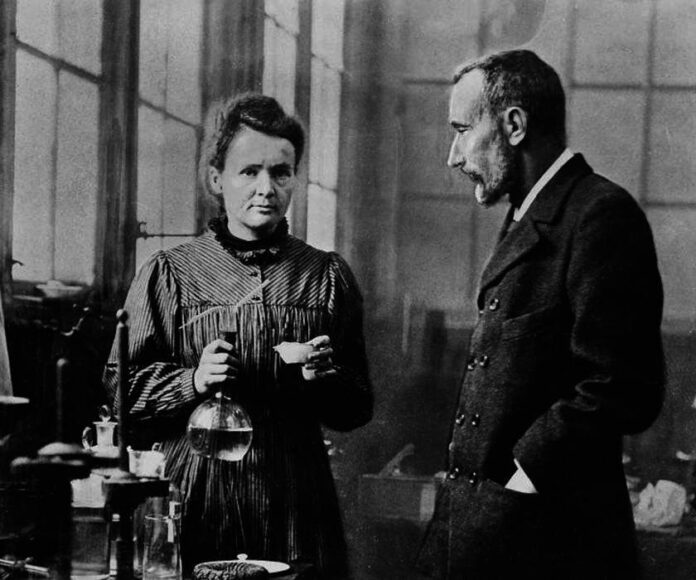 One of the central paradoxes of scientific research and technological development is that while every new discovery brings previously unknown possibilities to light, these discoveries can also have negative effects that may not be readily apparent. For example, certain medicines may provide exciting new treatment options, but it’s only later that their side effects come to light. One of the most glaring examples of this was the thalidomide scandal in the late 1950s, when thousands of women took this drug to combat morning sickness during pregnancy, and it was later found to cause birth defects. Similarly, in the 19th century, opium was thought of as a cure-all before its highly addictive nature was fully understood.

Along the same lines, Marie Sklodowska Curie’s discovery of the element radium in 1898 at first seemed to lead the way to a variety of novel medical treatments, but as the properties of radioactive materials became better known, radium’s health benefits came to seem more limited. Once added to everything from toothpaste to face cream, radium’s reputation went from cutting edge to dangerous within a few short decades.

The Element of Surprise

Marie Curie’s eventual discovery of radium was first set into motion by the research of French physicist Henri Becquerel, who noticed that materials containing uranium produced rays that fogged photographic plates. Looking into this phenomenon further, Marie Curie found that not only uranium, but also the element thorium, caused these effects regardless of their physical state (for example, dry or wet, crushed or solid), and from this deduced that the rays were part of the elements’ atomic makeup. She coined the word “radioactivity” to describe this property of these two elements, and along with other scientists of the time, opened the way to a new understanding that the atom was not the smallest unit of matter, but that even smaller particles (notably electrons) existed within it.

Building on this information, and on her observation that two uranium-containing compounds, pitchblende and chalcolite, produced much more radiation than uranium alone, Marie Curie speculated that there were other, as yet unknown, elements in these compounds. After extensive experimentation, aided by her husband Pierre Curie, Marie Curie was able to identify two new elements in pitchblende, which she called polonium (after her native Poland), and radium (after the Latin word for “ray”). Although the process of isolating radium involved processing a ton of pitchblende in order to obtain just a fraction of a gram of radium, even with similar levels of effort, the Curies found that it was impossible to isolate polonium. Later on, when the principle of radioactive decay was developed, scientists realized that the short half-life of polonium—138 days—was the reason for this problem.

With the help of industrial partners who could produce radium much more quickly in their processing facilities than it was possible to do in the lab, the Curies began to develop new uses for this marvelous material. However, the Curies never became rich because of their discovery, but as a service to the scientific community and the rest of the world, freely shared their method of obtaining radium. One of the first uses of radium was as an anti-cancer treatment, owing to its observed ability to damage tissue. The resulting treatment, known as Curietherapy in France, and radiumtherapy elsewhere, is still used in some instances to treat cancer today.

However, as with any health fad, there are those who take it too far, usually for financial gain. Because radium was seen as providing health benefits in one area, its use was expanded to other areas for which there was no proven benefit. This was especially the case in the 1920s, when advertising campaigns for face creams with names such as Tho-Radia and Radior claimed that “the amazing Energy of Radium has proved a boon to the human skin.” What purchasers of these products didn’t realize was that the “glow” they were seeking was not necessarily the kind they would actually receive.

In fact, the luminescent property of radium was precisely what made it attractive to manufacturers of clocks, watches, and other technical instruments, for whom its glow-in-the-dark ability was commercially advantageous. However, the use of radium-based paints for such applications was eventually found to be extremely dangerous, after many workers exposed to the paint died from the effects of radiation.

The growing awareness of radium’s toxicity made it seem less and less suited to general use, and when Marie Curie died in 1934, it was speculated that her exposure to radiation played a part in her death. Scientists now know that radium damages bone marrow particularly, because the body treats it as calcium, depositing it in the bones and providing it easy access to the marrow.

Although the benefits of radium fall far short of what it was once believed it could do, with careful handling radium still proves useful in medical treatment and scientific research. In addition, the story of its discovery is inspiring and laid the groundwork for many other important advances in science (If you’re ever in Paris, I highly recommend a visit to the Musée Curie, where you can see the actual office and lab used by Marie Curie in her later experiments). But the next time you hear something being praised as a miracle cure-all, remember that the truth may be more complicated than it seems.

Note: This is an updated version of an article that originally appeared on Interesting Thing of the Day on January 30, 2008.