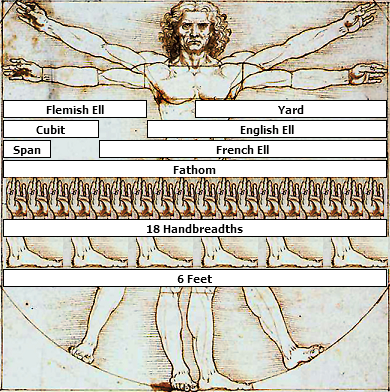 Like most guys, I love tools, especially if they’re expensive and so specialized I’ll only use them on rare occasions. Bonus points if they require electricity. My wife, knowing this about me, bought me a groovy little ultrasonic digital laser-guided measuring device as a gift. It even came with a holster. Now I can measure the size of any room (even its area and volume, if I need to) in just seconds. Morgen’s explanation for why she chose this gift was that she was tired of having to hold one end of a tape measure while I dragged the other end across the room. But I think it may have been that she thought I looked extremely goofy using my standard device for making linear measurements: my forearm.

Is That a Ruler in Your Pocket?

At some point years ago, I picked up the seemingly useless piece of information that an ancient unit of measurement called the cubit was the distance from the elbow to the tip of the middle finger. For an average adult male (at least, average as of a couple of millennia ago), a cubit works out to about 18 inches (45.7cm). Cubits were a standard unit of length in Sumeria, Egypt, and other parts of the Middle East long before anyone dreamed of an arbitrary, decimal-based measuring system. Cubits were most often used in the context of building; for example, if you look in an English Bible published before the mid-20th century or so, you’ll most likely see Noah’s ark specified as being 300 cubits long, 50 cubits high, and 30 cubits wide.

Not long after learning this tidbit, I began discovering how useful such a built-in measuring device could be. I don’t always carry a tape measure with me, but I frequently need to estimate whether, for example, a piece of furniture will fit in a certain room. Knowing the approximate length of my arm is surprisingly handy, because it’s extremely easy to use for rough measurements.

The cubit was just one of numerous units of measurement based on the typical size of body parts. Here are a few more:

The reason units of measurement like these fell out of favor is that they vary from one person to the next, so if you need accuracy or repeatability, they’re not the best choice. (It turns out, for example, that my personal “cubit” is 18.375 inches (46.67cm). I always was an overachiever.) But for quick-and-dirty estimates when you don’t have a standard measuring device handy, they can’t be beat.

As long as we’re estimating, American readers might want to keep in mind that the length of a U.S. dollar bill is just a bit over 6⅛ inches (or a third of a cubit for all practical purposes). I can’t fathom why such an odd, arbitrary size was chosen.

Note: This is an updated version of an article that originally appeared on Interesting Thing of the Day on September 30, 2003, and again in a slightly revised form on August 23, 2004.