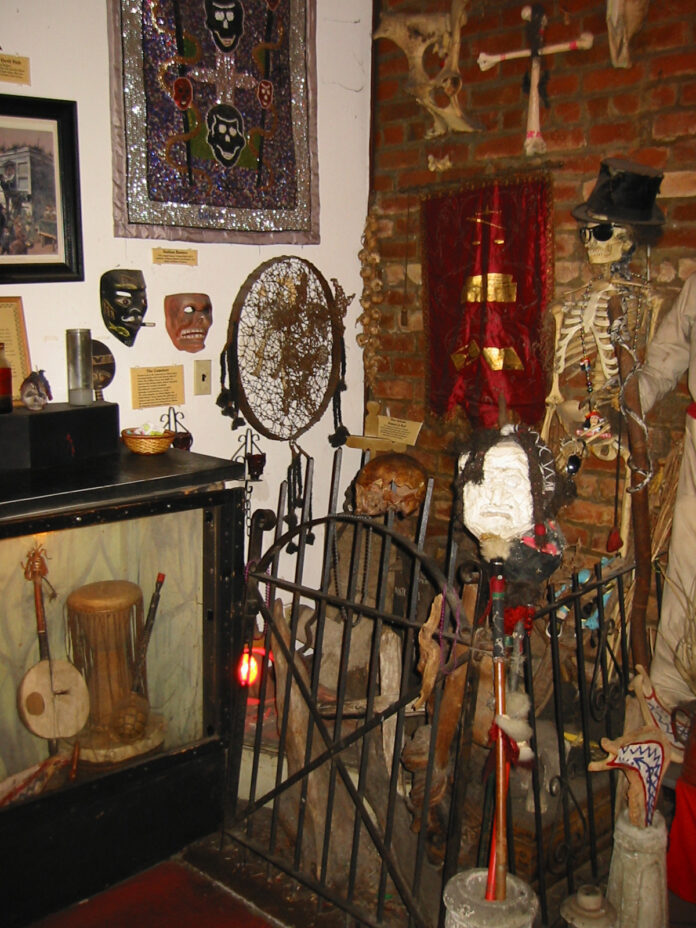 On my first walking tour of New Orleans, our guide promised us chilling stories of ghosts, vampires, pirates, horrific murders, and all the other dark elements of the city’s past—some real, some fictional. And as if to show that these dark forces were still alive and well, he said that our very last stop would be a genuine, functioning Voodoo temple. At that point, everything I knew about Voodoo had come from bad films and TV shows. I gathered that it had something to do with black magic, curses, and sticking pins in dolls. So a chance to meet real Voodoo practitioners seemed exciting and a bit scary.

To Grandmother’s House We Go

When we finally got to the temple, it was a bit anticlimactic. The building was just a converted house, the rooms were bright and cheery, and there wasn’t the remotest suggestion of any evil undercurrents. Yes, there was the smell of incense in the air; yes, there were a bunch of altars piled high with offerings and candles; and yes, there were a lot of unusual images on the walls. But then, the same could be said of any Buddhist temple. Wasn’t Voodoo supposed to be, like, wackier? Then we met the resident clergy, Priestess Miriam. In retrospect, the Voodoo priestess reminds me of the Oracle in the Matrix films—friendly, down-to-earth, maybe even grandmotherly, and not what I was expecting. She gave a short talk and answered all our questions. Her mild manner and warm smile seemed to say, “Sorry if you were expecting animal sacrifices and gibberish. I get that a lot.”

Most educated westerners are familiar with the world’s major monotheistic religions, at least in broad strokes. But Voodoo holds a much different place in the public awareness, because sensationalized fictional accounts of Voodoo practices are so common. Even the word “Voodoo” has become slang for “scary,” “silly,” or “nonsensical.” Unfortunately, what books and films say about Voodoo is mostly misleading if not downright false. Zombies, devil worship, and human sacrifices all make for a scary story, but they have nothing to do with Voodoo as practiced by 60 million people worldwide.

The term “Voodoo” is an unfortunate Americanization of a word that originally was more like “vodu”; alternate spellings, each of which is championed by one group or another, include Vodun, Vodoun, Voudou, Vaudoun, Vodou, Voudoun, and probably quite a few more. The religion as practiced in Haiti, where it has the largest number of adherents, is usually spelled “Vodou” (pronounced “vo-DOO”). Voodoo (under one name or another) is practiced in several Caribbean countries and is the official religion of Benin in western Africa, but also has a large following in the United States. New Orleans seems to have earned a reputation as the unofficial Voodoo capital of America.

Far from being a set of evil practices, Voodoo is actually a complex religion with a rich set of beliefs and rituals. Although there are many different varieties of Voodoo (comparable, perhaps, to the variety of Christian churches), they share in common a belief in a single God, called Bondye (from the French Bon Dieu, “good God”). This God is, however, remote and normally inaccessible, so interaction with the spirit world is generally by way of contact with lesser spirits called Lwa (or Loa), pronounced “l’wah.” The Lwa, of which there are many, are often referred to as a “pantheon,” but that term is a misnomer because Voodoo practitioners think of the Lwa as more like saints than gods. In any case, the spiritual business of Voodoo—healings, prophecies, blessings, prayers, and so on—requires contact with the Lwa, who often possess or “mount” worshippers during ecstatic rituals. Another central tenet of Voodoo is veneration of one’s ancestors. Their spirits are believed to influence one’s life, so proper respect and sacrifices (of food, generally) are seen as important to stay in their good graces.

The Beat of a Different Drummer

Rituals play a large part in the practice of Voodoo; most are presided over by a priest or priestess in a local temple. Drumming, singing, and dancing are almost invariably part of Voodoo rituals, and in the versions of Voodoo practiced in some areas, animal sacrifices do occur regularly to appease the Lwa. But the main focus of Voodoo rituals is on positive desires such as healing, prosperity, and protection. As in any religion, most practitioners seek a harmonious relationship with other people as well as with the forces of the unseen world. But as is also true of other religions, there are smaller, more extreme groups of believers who practice a darker and more violent version of Voodoo. Even that version doesn’t quite live up to the Hollywood picture, though.

And what about the infamous Voodoo dolls? They do exist—but mainly as souvenirs for tourists. There are some Voodoo practitioners, particularly in the southern United States, who use Voodoo dolls in their rituals, but generally the idea is not to make an enemy cry out in pain by sticking a needle in a doll’s eye. Rather, the dolls are used as a symbolic proxy for attracting good things and dispelling bad things from one’s life—your own or someone else’s.

Voodoo as a modern religion evolved in the second half of the 18th century in Haiti. Yoruba slaves from West Africa developed a system of religious practice based on animistic beliefs that can be traced back thousands of years. But in the 19th century, a series of crackdowns by the Catholic church drove Voodoo underground. Since Voodoo could not be practiced openly without serious repercussions, worshippers began to associate Catholic saints with Voodoo Lwa. In other words, while they appeared to be praying to, say, St. Patrick, they were really just calling the snake Lwa Dumballah by another name. There is some disagreement as to whether this mapping amounts to syncretism; it’s not so much an absorption of Catholic beliefs as an openness to alternative terminology. Nevertheless, distinctive ritual elements of Catholicism and various African religions are easily found in Voodoo—particularly in the variety practiced in the southern United States. And in Haiti, despite the fact that Voodoo is no longer outlawed, a large percentage of the population practices both Catholicism and Voodoo with equal earnestness, and without feeling there’s any tension between the two belief systems.

Voodoo doesn’t fit neatly into the categories of modern religions. It doesn’t have a bible or other set of universal codes. It gives the appearance, at least, of mixing and matching elements from other religions. And it has, let’s face it, a funny-sounding name. But when you get right down to it, Voodoo beliefs are no more (or less) wacky than those of any other religion.

Note: This is an updated version of an article that originally appeared on Interesting Thing of the Day on August 7, 2003, and again in a slightly revised form on February 9, 2005.