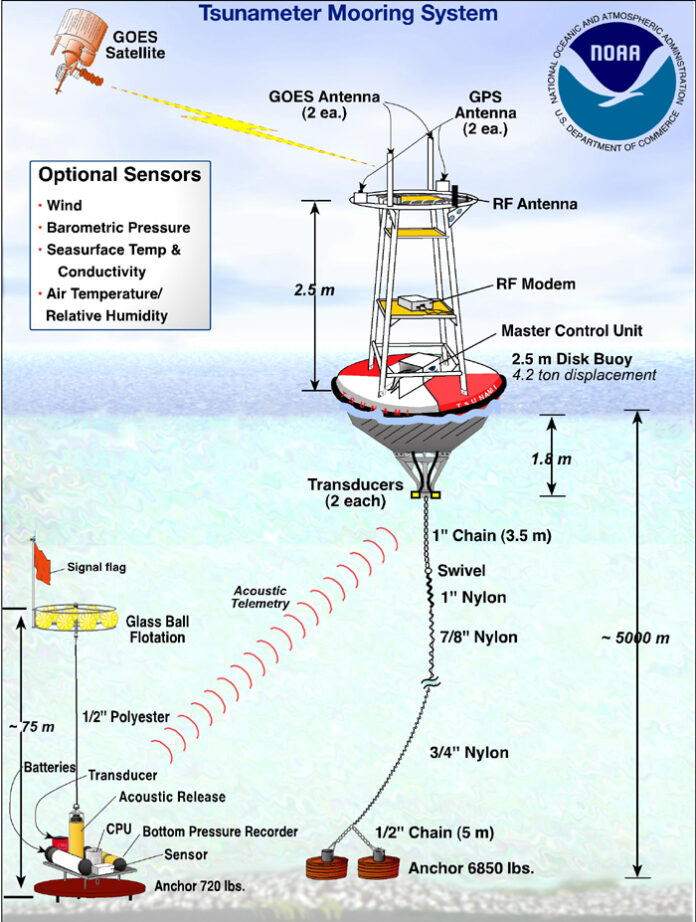 At the end of December 2004, I was among the millions watching the endless hours of TV coverage of the Indian Ocean tsunami. That was the first time I remember hearing talk of a tsunami warning system; at that time, the context was, “Maybe if such a thing had been in place there, lives could have been saved.” In the years since, quite a bit of work has occurred around the world to expand and improve tsunami warning systems. They’re still not perfect—just yesterday, when a major earthquake struck Alaska, a tsunami warning was issued and then quickly rescinded. Still, better to err on the side of caution.

But how exactly do tsunami warning systems work? I decided to look into it.

Tsunamis usually begin with strong earthquakes, and there is a global network of sensors that can adequately detect and measure seismic activity. But not all strong earthquakes that occur in the ocean produce tsunamis, and even when they do, seismic data gives few clues as to the direction or speed of the waves. So although some regional tsunami warning systems are based on seismic data alone, such systems are notorious for false positives. The only way to know for sure if a tsunami is coming is to observe the waves as they move. But perhaps “observe” is not the right word; tsunami waves appear quite small at the surface when far out at sea, even near a quake’s epicenter. With a height of sometimes as little as a few centimeters, they look like ordinary waves from a boat or plane. Only as they approach land do they swell to dangerous sizes. This characteristic makes detection a tricky business—requiring high-tech equipment and computerized analysis.

The first method used to supplement seismic data was taking readings from tide gauges. Although some tide gauges are quite sophisticated, many are simple mechanical devices that measures the height of a float protected from waves by an enclosure called a stilling well. Because tide measurements require a fixed point of reference, tide gauges are normally installed on or near a coast. Thus the data they provide is more useful for landmasses farther out from the tsunami’s starting point.

A more direct way of detecting tsunamis is to measure changes in pressure on the ocean floor. The Deep-ocean Assessment and Reporting of Tsunamis (DART) program, in use in the Pacific ocean, uses bottom-mounted sensors to detect changes in water pressure consistent with a tsunami. The sensors relay the information via sonar to a buoy floating on the ocean’s surface; the buoy, in turn, transmits the data to a satellite, which relays it to ground-based stations for processing. DART greatly increases both the speed and accuracy of tsunami warnings, but the sensors and buoys are prone to failure and must be serviced or replaced frequently. In addition, there are at present too few of them in place to monitor all the world’s oceans, and ongoing funding for DART is far from guaranteed.

Although tsunamis out at sea are not visible to the naked eye, radar satellites, if they happen to be pointed in the right place at the right time, can detect them. The problem with satellites, apart from knowing where and when to look, is that the data they produce must be processed back on Earth; the time required—currently several hours—is generally too long to be of use for warnings. Future generations of satellites, however, may overcome these limitations.

The Challenge of the Last Mile

Even if and when the world’s oceans are fully populated with perfectly functioning tsunami sensors, the truly phenomenal challenge will be getting the information from the scientists who operate the equipment to the people living in the coastal areas where the tsunamis will hit. For one thing, tsunamis move incredibly fast—up to 1,000 km/h (about 600 mph). So land areas must be at least a few hundred kilometers away from a quake’s epicenter to have even a small chance of receiving a warning in time. Once the warning does come, the nation must have the infrastructure to relay it rapidly to coastal areas at any hour of the day or night. Although SMS messages, telephones, television, radio, and the internet can be used for such purposes, residents need something that can wake them in the middle of the night—such as a siren—to be assured of having maximum time to react. While such warning systems may be feasible in densely populated coastal towns, it’s inconceivable that every remote beach in the world is ever going to have a tsunami alarm. The ever-increasing prevalence of cell phones is helpful—but not if the local cellular infrastructure happens to flake out just when it’s needed.

Then, of course, there’s the little matter of preparedness. If I lived near the ocean and someone told me that a tsunami was going to hit my home in 15 minutes, I wouldn’t necessarily know what to do—where to go, what to take with me, how to be as safe as possible. Every child attending school in California learns what to do in the event of an earthquake, but not, in general, how to cope with sudden giant waves. This is all the more true in many other parts of the world. No matter how great the technology is, there’s no substitute for education.

Note: This is an updated version of an article that originally appeared on Interesting Thing of the Day on January 20, 2005.