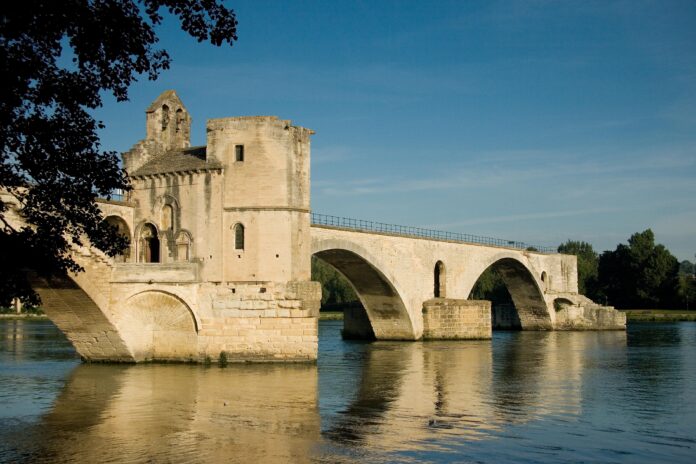 On our first trip to France, way back when, Morgen and I spent about a week in Provence. There was no way we could see all the places that interested us in such a short period of time, so we had to settle for a few highlights. We were able to squeeze in just about half a day in the town of Avignon, and though it has immense historical significance, our main reason for visiting was a nursery song. Having grown up in the United States, I was familiar with French children’s tunes such as “Frère Jacques” and “Alouette,” but I’d never heard “Sur le Pont d’Avignon,” which Morgen learned as a child in Canada. The song is all about people dancing on the Bridge of Avignon. It doesn’t mention the rather important fact that the bridge in question—which is probably the town’s most famous attraction—stops abruptly less than halfway across the Rhône river.

Rome if You Want To

Avignon rose to fame when, in 1309, Pope Clement V decided to move the official papal residence from Rome to Avignon—which was, at that time, on the outskirts of the Holy Roman Empire (and just across the Rhône from France). Seven popes called Avignon home until 1377, when the papacy officially returned to Rome. (From 1378 to 1417, leadership of the Catholic church was in dispute; two so-called antipopes, Clement VII and Benedict XIII, resided in Avignon during that period.) Later, after the French Revolution, Avignon would finally become part of France.

But long before the Church took an official interest in Avignon, it was already known as place of spiritual significance. According to legend, in the early 12th century, a young shepherd boy named Bénezet heard the voice of God commanding him to build a bridge spanning the river, and was guided by an angel to the designated location. The Avignon townsfolk were disinclined to attempt such an undertaking until Bénezet (as the story goes) picked up a huge stone and threw it into the river at the spot the angel had indicated—proving divine guidance.

Construction of a wooden bridge began in 1177 and ended in 1185, about a year after Bénezet’s death. The bridge became known officially as the Pont St-Bénezet (Saint Bénezet Bridge) in his honor. A small chapel honoring St. Nicholas (the patron saint of mariners) was constructed on the bridge itself—atop the first pier from the Avignon side that’s actually in the water. Bénezet’s remains were interred in the chapel.

Unfortunately, floods (and military sieges) frequently wiped out portions of the 900-meter (3,000-foot) bridge, which was rebuilt several times over the next five centuries or so—with stone being the building material of choice from the late 13th century onward. Even with its stone construction, however, the bridge continued to deteriorate. By the late 1660s, all attempts to rebuild it ceased, and today, only four of its 22 original arches are intact. Bénezet’s remains, which in the late 17th century had been swept away in yet another flood, were moved to another church. However, the small remaining portion of the bridge—which includes the chapel—has been restored and is in no immediate danger of disappearing.

The day we visited Avignon, a Renaissance festival was taking place in the Palace Square. Surrounded as we were by old stone walls and buildings, we could easily imagine that the town had looked just like this several centuries ago. (The hordes of tourists with cameras soon shattered that illusion, though.) In a surreal juxtaposition, the inside of the Palace of the Popes was full of scaffolding, video screens, cables, and other electronics, as a multimedia art display of some kind was being installed. Apparently, the only thing in the town that looked as it usually does was the bridge—and as I recall, just as we walked onto the bridge, it started to rain. That may have been why I did not get any good photographs of the Pont d’Avignon. Our visit to the town, like the bridge itself, ended too soon.

Note: This is an updated version of an article that originally appeared on Interesting Thing of the Day on May 8, 2005.