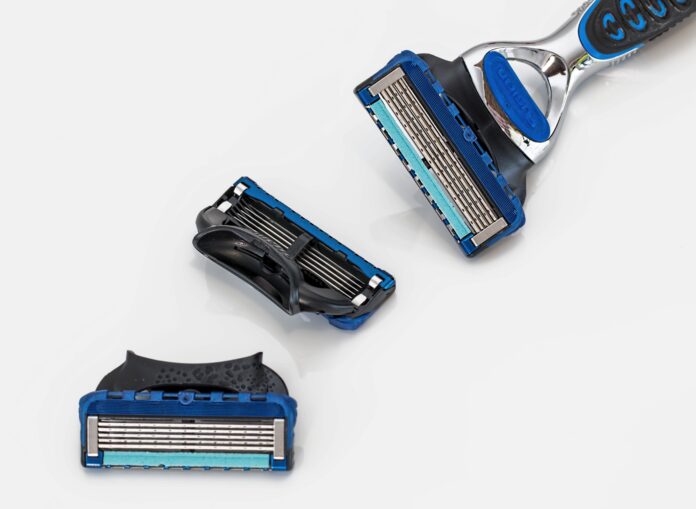 One day maybe 15 years ago I opened my mailbox, and there inside was a box from Gillette containing a brand-new Mach3 razor. It turned out that the box was addressed to my neighbor, which is just as well: the idea of shaving with a triple-blade razor seemed a bit—excuse me—over the edge. In the years since then, the Mach3 has been superseded by models with four and five blades, with or without a vibrating feature—the mind boggles. But the twin-blade Gillette SensorExcel razor I used for many years also came in the mail for free, and also, coincidentally, wasn’t addressed to me—I got it from a friend who didn’t want it. Still, exactly as Gillette hoped, I spent many, many dollars over the years on their obscenely overpriced blades before breaking down and buying an electric razor. Like countless other people, I was sucked in by the “give-away-the-razor-sell-the-blades” concept. Old-fashioned and counterintuitive, this marketing gimmick is still going strong.

Around 1900, a salesman named King Camp Gillette dreamed up the idea of disposable razor blades. Before that time, razor blades were thicker and were simply sharpened when dull—a time-consuming and imprecise (not to mention dangerous) process that no one enjoyed. Gillette’s innovation was to make the blades thin enough and inexpensive enough that they could simply be thrown away when they dulled. At first, he couldn’t sell the blades for as much money as it cost to make them, but eventually he had a wacky (and perhaps not original idea: he would give away the razor handles. People who got them perceived them as being valuable—but only when fitted with one of Gillette’s special blades. So there was a subtle yet forceful psychological pressure to maintain that value by continually buying the blades. After a few months of blade sales, the cost of the handle was recovered and Gillette began to make a profit. Within a decade, Gillette’s company dominated the razor market and made its inventor extremely wealthy.

Nowadays, Gillette’s strategy has been—excuse me again—honed to a new level of sophistication. Each new model of razor has a unique design such that only blade refills made to those exact specifications will fit. When possible, the designs are patented so that third parties are prevented from selling their own refills; Gillette, meanwhile, charges a small fortune for their blades, and customers dutifully buy them. Predictably, when a patent expires, opening the market for generic competitors, Gillette releases a new design, along with a new marketing campaign geared toward making people with last year’s model feel like they’re no longer—sorry—on the cutting edge.

This strategy is technically a form of what’s called “loss-leader” marketing. In general terms, a loss leader is a product sold at a loss in order to generate secondary sales later on. In some cases, a loss-leader product doesn’t produce dependencies that lead to other sales directly, but rather builds brand image and goodwill among customers, in hopes that this will indirectly produce sales later on. In other cases, products are sold at a loss strictly to gain market share or monopolize shelf space; profits come from upgrades, add-ons, or other secondary sales.

One of the most common implementations of loss-leader marketing for many years has been cell phones. I regularly see ads offering a smartphone for free (or some trivially small amount of money), even though I know they cost quite a bit to manufacture. In this case, the “blades” are the monthly service fees. The carrier expects to recoup the cost of the phone—and then some—by selling you air time. They ensure that they won’t lose money by building a clause into the contract stipulating that you must pay a “cancellation fee”—in other words, the cost of the phone—if you discontinue service before your contract expires.

Give Away This, Sell That

Any product that requires a service plan, periodic upgrades, or consumable refills is ripe for this type of marketing approach. Satellite TV providers sometimes install an antenna on your roof and a receiver in your living room for free, as long as you make a one-year commitment to pay for monthly service. Another example is color inkjet printers, which used to be fairly expensive but now routinely sell for well under US$50. Replacement ink cartridges, however, often cost an arm and a leg, in some cases making your total cost per page higher over the long run than if you’d purchased a more expensive laser printer.

Loss leaders are weird and sometimes borderline sketchy, but at least they’re fairly transparent—unlike the current “free but ad-supported” model for nearly everything, in which you implicitly give away a great deal of privacy, to say nothing of time and attention, in return for products or services. But given the choice, I’d nearly always pay much more up front for a quality product in exchange for having lower-priced consumables or other ongoing charges. I think there could totally be a market for this radical idea of charging what things are actually worth. It’s so crazy, it just might work!

Note: This is an updated version of an article that originally appeared on Interesting Thing of the Day on May 21, 2003, and again in a slightly revised form on September 2, 2004.