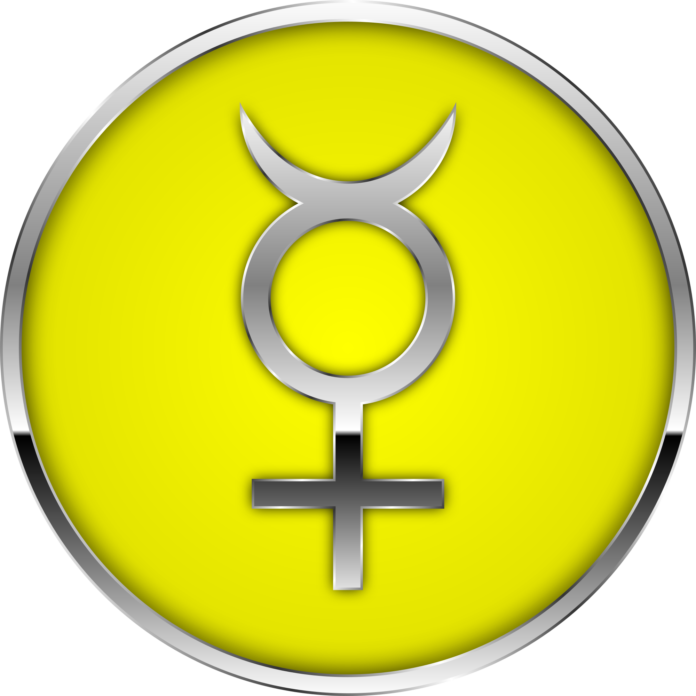 Among the many things that interest me are some that have—how can I put this delicately?—dubious claims to authenticity. Fortunately, this is not “Interesting True Fact of the Day,” and I don’t think anyone would dispute that the word “thing” could be applied fairly to unicorns, flying saucers, or pots of gold at the end of the rainbow. Today’s topic, the astrological interpretation of a perfectly commonplace phenomenon called Mercury retrograde, is perhaps in the same category. But the story of Mercury retrograde’s alleged effect is quite interesting—so much so that I’m tempted to believe in it, common sense notwithstanding.

The word retrograde simply means “moving backward” or “retreating.” In its astronomical usage, a planet is said to be retrograde when, from the viewpoint of Earth, it stops and then moves backward in its orbit. The effect has been likened to driving down the road watching a moving car beside you—if it slows down or your car speeds up, the other car appears to be moving backward. A change in speed has nothing to do with a planet going retrograde. The illusion of backward motion occurs because the angle of a planet’s orbit relative to Earth’s orbit changes at certain points in their respective cycles. Three or four times a year, for a period of 20 to 28 days each time, Mercury exhibits this effect.

It’s All a Big Misunderstanding

Astrologically speaking, Mercury is associated with communication—the god Mercury, after all, was the winged messenger. By inference, if Mercury is moving backward, that implies difficulty communicating. Specifically, Mercury retrograde periods are said to be characterized by misunderstandings, confusion, and indecision. Delays in communication (for example, a misdirected package or a failure to return a call) are common, as are distractions and a frequent need to rework or redo things you create. Mercury retrograde is also blamed for malfunctions of every kind—cars breaking down, computers crashing, and appliances going kaput for no apparent reason, and with greater frequency than usual.

It’s oddly appropriate that even the name of the phenomenon is often not communicated correctly. I frequently hear people say, “Mercury’s in retrograde.” My inner grammarian obliges me to point out that this doesn’t make sense, any more than saying, “My car is in green.” Retrograde is an adjective, so Mercury can’t be in retrograde, it’s just…retrograde.

I’ll Get Back to You in a Few Weeks

Conventional wisdom in astrological circles says that one should never make an important decision during Mercury retrograde. There are also some who say—though there’s disagreement on this point—that Mercury retrograde is a bad time to travel, since a breakdown, lost reservation, or other mishap will be harder to deal with away from home. But because of all the other things that can go awry, a great many people become tentative or even paralyzed with apprehension during Mercury retrograde. Whatever can be said of the astrological effect, the psychological impact of the astrologers’ claims is strong indeed.

So is there anything real to Mercury retrograde? Certainly the astronomical phenomenon as such is not in dispute. Every planet spends some time in a retrograde state relative to Earth during the year, and this is nothing more than a quirk of geometry. But what about the supposed manifestations in daily life? Well, astrologers eagerly point to major world events that occurred during Mercury retrograde periods and purportedly show the hallmarks of its influence. Notably, the 2000 U.S. presidential election—which was without a doubt a profoundly weird case of confusion, delay, and difficulty in making decisions—occurred during Mercury retrograde. There are hundreds of other examples, but it’s difficult to evaluate them without carefully comparing them to events that occurred when Mercury was not retrograde. By its very nature, the effect is so subjective that it would be impossible to pin down definitively.

Even astrologers allow that Mercury retrograde—or any astrological configuration, for that matter—doesn’t cause anything as such; it’s rather an indication, a sign, a symbol. The positive spin is that because communication difficulties tend to occur during these times, it’s a good opportunity to meditate, to reexamine priorities and projects, to give special consideration to your interactions with others. Nothing that happens is truly the fault of Mercury retrograde; instead, it’s an indicator of where your awareness and attention should be.

Many years ago, I picked up a book on Mercury retrograde, intending to give it to a friend as a joke. The right situation never presented itself, however, and I ended up keeping the book. One day I thought I’d read a bit just out of curiosity, so I skimmed the first few chapters to get an idea of what sorts of claims were being made. Then I put the book aside and forgot about it. Months later, I experienced a striking number of inexplicable miscommunications, malfunctions, and delays within a period of a few days, and the character of these events reminded me of what I had read. On a whim, I checked the calendar in the back of the book. Sure enough, Mercury was retrograde. I thought that correlation was mildly interesting—a curious coincidence. But several months later something very similar happened, and once again, I discovered that Mercury had been retrograde at that time. The same thing has happened numerous times since then. That, as they say, makes me go “Hmmmm.”

I would be the first person to point out that anecdotal evidence of a positive correlation between a spike in miscommunications and a change in apparent planetary motion is hardly a smoking gun. It doesn’t prove a cause-and-effect relationship, or even that it’s not imaginary. And, to be sure, I’ve had lots of things go wrong when Mercury was not retrograde, and lots of great experiences while it was. Still, the frequency with which the claimed effects of Mercury retrograde do in fact occur nags at me. I don’t know what, if anything, to make of it, but I certainly notice it.

There are a lot of people who claim not to believe in astrology but who nevertheless check their horoscopes daily, “just for fun.” Not me; the whole notion of sun-sign horoscopes strikes me as self-evidently absurd, and it feels like an insult to my own intelligence to read that stuff even for its entertainment value. My opinion of horoscopes, like tarot cards, palm reading, and crystal balls, is that they’re just like an ink blot test: by themselves they mean nothing, but you can read into them whatever your predispositions suggest. A belief in their predictive power can turn them into self-fulfilling prophecies, proving nothing. Yet having said all that, there’s something about Mercury retrograde that gives me pause. I don’t plan my life around it and I don’t put off important decisions just because it’s that time of year. I do, however, tend to slow down and give more thought and care to my plans, and I try to be a little more gracious and understanding when glitches occur. That, at least, is a very positive effect of Mercury retrograde.

Every chart listing Mercury retrograde periods computes them a bit differently; it’s not uncommon to see starting and ending dates varying by as many as three or four days. There are several reasons for the variations. For one thing, exact dates vary according to one’s point on the globe; for another, some charts include the periods at the beginning and end of a retrograde cycle when Mercury appears to be standing still (Stationary Retrograde and Stationary Direct, respectively). There are also those who like to have a bit of a margin of error on either side to take fringe effects into account. All that said, in case you’re curious, here’s a list of approximate Mercury retrograde periods in the next several years:

Note: This is an updated version of an article that originally appeared on Interesting Thing of the Day on May 5, 2003, and again in a slightly revised form on August 9, 2004.