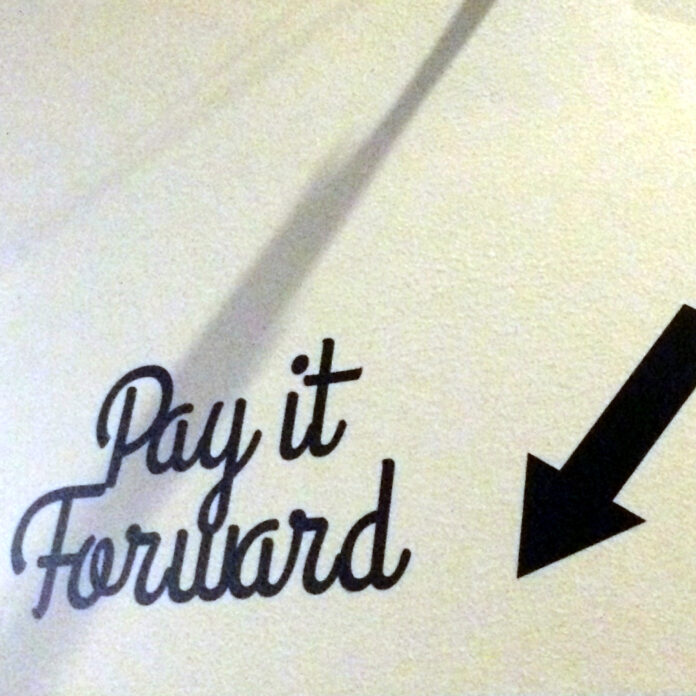 Although I certainly have my malevolent moments, I generally try to treat other people in a courteous and helpful manner. I do this not out of a sense of guilt or duty, or because I expect some reward; it’s simply a habit—albeit one that has served me pretty well over the years. My impression is that people tend to behave more pleasantly toward me when I’m pleasant toward them, so I suppose my own behavior could be considered self-serving to some degree. What confounds me is when someone expresses surprise at polite behavior on my part. Quite frequently, for instance, someone who has read one of my books will write to ask me a technical question, and I write back as promptly as I can—even if it’s just to say I don’t know the answer. When I get a note back thanking me effusively and expressing amazement that I bothered to respond at all…that’s when I boggle. Has the world become so full of rude people that answering a simple question by email is now a shocking anomaly?

Part of the problem is that most of us feel an unconscious mandate to maintain a balance of good and evil deeds. If someone invites me over for dinner, I must extend that person a similar invitation—or repay the favor in some other way. Otherwise, there seems to be an imbalance: I feel that I am somehow in debt to the other person, and that only by doing something equally kind in return can balance be restored. On the other hand, if someone harms me, I (or—in more serious cases—the government, acting on my behalf) must punish that person. To allow an injury to go unpunished is unthinkable, because it leaves the universe in a perilously unstable state with more evil deeds than good. And asking a favor of someone—especially someone you don’t know—is also problematic, because it means putting yourself in debt to that person.

Except I don’t buy any of that.

There aren’t any cosmic scales of justice, no divine tallies of who owes what to whom. If anything, the Buddhist notion of karma may be closer to what I’ve observed. Good deeds tend to generate goodwill that leads to more good deeds, and evil deeds do the opposite. If this is even approximately correct, it implies that no one ever owes anyone anything—neither help nor harm must be repaid. But the notion of doing good without any expectation of reciprocation or reward is a hard sell in western culture. So hard, in fact, that not even an A-list cast including Helen Hunt, Haley Joel Osment, and Jon Bon Jovi could prevent the 2000 film Pay It Forward from being roundly panned, espousing as it did just such a view.

Count to Three, Change the World

For those who haven’t seen it or read the novel by Catherine Ryan Hyde on which it was based, the story revolves around a young boy named Trevor. When asked by a social studies teacher to come up with an idea that could change the world, Trevor decides he’ll do favors for three people. The twist is that instead of repaying him, each of the people he helps is required to “pay it forward”—to help out three other people. Each of those people, in turn, is obliged to do favors for three more people, and so on—so that, if everyone follows through with their good deeds, pretty soon everyone in the world is helping out other people without expecting anything in return. A lovely scenario, if sappy and implausible.

I enjoyed the film and found it moderately inspiring, but I understand why so many people had a strong negative reaction. Apart from a predictable script and unexceptional acting, the story itself is difficult to stomach. In a nutshell: it just doesn’t work that way. For one thing, human nature being what it is, the probability that someone will “pay forward” a favor, no matter how profound or life-changing, is vanishingly small. For another, the film pretty transparently imposes its morality of selfless behavior on the audience. It feels uncomfortable to be told so blatantly how to act, especially when the film itself was clearly made for financial gain.

Back in the real world, the idea of “paying it forward” has caught on here and there. Following the release of the film and novel, Hyde established the Pay It Forward Foundation, which promotes educational programs based on the pay-it-forward principle. But based on its official website, it does not appear to have gained a great deal of momentum (to put it charitably). Certainly it has not come anywhere near the explosive popularity predicted by Trevor’s school project. And oddly enough, the more I think about it, the less enthusiastic I am about the idea too.

One Step Forward, Two Steps Back

The biggest objection I have to the notion of “paying it forward” is that I don’t want to impose an obligation on anyone—even if that obligation has nothing to do with repaying me. If someone did a favor for me and then demanded that I do favors for three other people, I’d naturally resist. The favor would seem tainted, because the request to pay it forward amounts to an imposition of guilt, a placing of three weights on the negative side of that metaphorical balance. If I must now go out and do good deeds out of obligation to the person who helped me, those deeds are no longer genuinely selfless, no longer karmically pure.

I don’t “practice random acts of kindness”; I don’t “follow the Golden Rule.” I just try to be nice to other people most of the time. If I did it all the time, I’d be a saint; if I “paid it forward,” I’d be an activist. Not that there’s anything wrong with that, but I’d just as soon not increase the world’s guilt quotient.

Note: This is an updated version of an article that originally appeared on Interesting Thing of the Day on November 26, 2004.