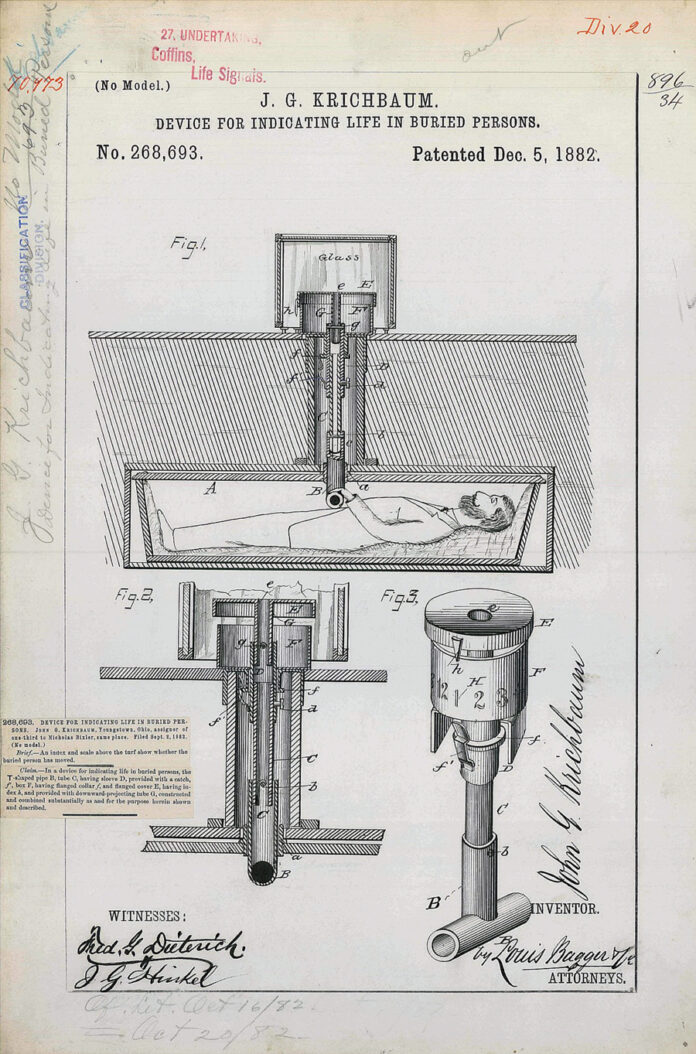 Among the many urban myths circulating on the internet is a document called “Life in the 1500s” that began as an anonymous email message and has since found its way onto countless websites that took it as legitimate history. Among other things, this list of alleged facts about Renaissance life purports to give the origins of numerous English expressions, such as “raining cats and dogs,” “chew the fat,” and “dead ringer.” Unfortunately, although there are a few kernels of truth in the message, most of it is completely false. Whether it was an intentional hoax or merely the product of someone with a good imagination and poor research skills, it has misled a lot of people into mistaken etymological beliefs.

Take, for example, the claim that in the 1500s, people were often unintentionally buried alive—as evidenced by scratch marks on the insides of coffins that were later exhumed for some reason. On hearing such stories, public fear of being buried alive allegedly resulted in a new method of burial, in which a string was tied to the wrist of the departed and fed through a hole in the coffin all the way to the surface, where it attached to a bell. Were the person to awaken, the slightest arm movement would ring the bell, alerting someone to dig them up. Hence—so the tale goes—the origin of the expressions “saved by the bell” and “dead ringer.”

That’s a lovely and plausible-sounding story, but it happens to be untrue. The expressions “saved by the bell” and “dead ringer” had entirely different origins (about which more in a moment). And the whole business of coffins being designed with warning bells? That was certainly not part of life in the 1500s. Not at all. Not even close. It didn’t happen until the 1800s.

Even today, the criteria for determining that someone is dead are not entirely unambiguous. If someone is missing a heart or brain, the diagnosis is relatively straightforward. But there are any number of circumstances under which someone’s pulse and breathing may be indiscernible—or even entirely absent—and yet death has not occurred. Even the absence of brain waves is not always an uncontroversial sign of death. A variety of medical conditions, or perhaps even a deep trance, can render someone cold, motionless, and unresponsive for some period of time. Occasionally you may see stories in the news about people who wake up in a body bag, a morgue, or even a funeral parlor, having been incorrectly pronounced dead. It doesn’t happen often, but it happens.

A few centuries ago, when medical science was much less advanced than it is today, this sort of thing happened considerably more often. History is littered with stories of such occurrences—sometimes with happy endings, but usually not. There have even been cases where coffins were found to have scratch marks inside, and though this is not necessarily proof that the person was buried alive, that surely did happen from time to time, especially considering that in the days before embalming became common, burials tended to happen quite soon after death.

During the Victorian age (roughly the second half of the 19th century), there was, for whatever reason, an unusual amount of public anxiety about the possibility of being buried alive—in England, continental Europe, and even the United States. Edgar Allan Poe tapped into (and exacerbated) this anxiety with a few of his short stories: “The Black Cat” in 1843, “The Cask of Amontillado” in 1846, and “The Premature Burial” in 1850.

Such anxiety is not unique to that time period, but that was when a flurry of inventors set out to solve the problem. Patent records from the period show many designs for so-called safety coffins. Some designs merely contained a signaling apparatus of some kind—and yes, a few of them actually did use a bell with a string fed through a tube into the coffin. Other designs were more elaborate, with motion from the body raising a flag, sending a telegraphic signal, or even shooting off fireworks. There were also some coffins with escape hatches or spring-loaded release mechanisms, though the latter would have been useful only before burial.

A few of the later designs included air inlets that would open if, and only if, the alarm was actually triggered. This was—excuse the expression—a fatal flaw. A full coffin holds very little air; without even taking into account the exertion of calling out for help or pushing on the lid, an average (healthy) person would pass out within an hour or two after a coffin was sealed, and expire shortly thereafter. However, that detail was apparently a moot point. Although some of the safety coffins were in fact manufactured and sold, there is no record from that time period of anyone having been buried in one. And thus, there are also no records of one of these inventions actually saving someone’s life. But still the meme persists. Even in recent years, there have been several news stories about high-tech safety coffins offered for sale—some of which even include a bottle of oxygen, just in case.

So what about the aforementioned phrases? Well, “saved by the bell” is easy enough: it’s a boxing term, first used in the 1930s. It refers to a boxer who gets a (sometimes temporary) break from being pummeled when the bell rings to signal the end of the round. “Dead ringer” is a bit trickier—though a moment’s reflection will show that it has nothing to do with being buried alive; it refers to a “double,” someone or something that looks just like someone or something else. The “dead” part gives an expression a sense of exactness or completeness, as in “dead even” or “dead wrong.” As for “ringer,” it’s a slang term for a fake or an illicit substitute (as in a sporting competition). My dictionary says this meaning goes back to the 15th century. I’ve read elsewhere that it derives from “ring the changes,” which originally meant to ring a set of church bells in a variety of different sequences, and later took on a metaphorical meaning of varying the way one performs any action. In any case, it clearly predates the use of safety coffins. As for that story about life in the 1500s…some bad ideas just refuse to die.

Note: This is an updated version of an article that originally appeared on Interesting Thing of the Day on April 23, 2005.