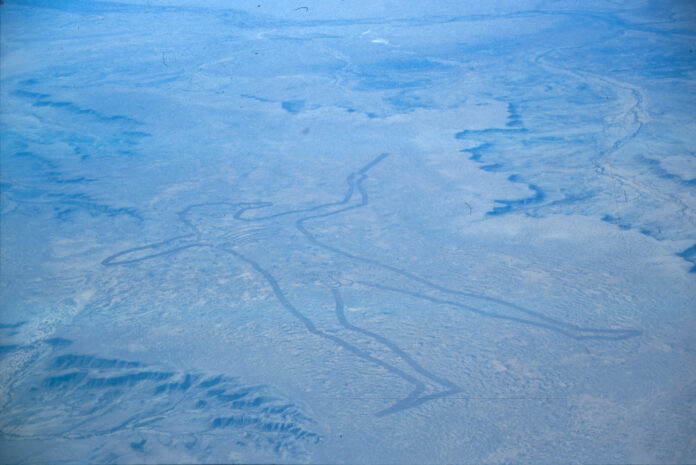 Other articles here at Interesting Thing of the Day have covered some of the world’s best-known geoglyphs, or figures carved into the ground. Uffington White Horse in England and the Nazca lines in Peru are examples of huge figures that can only be appreciated in their entirety from the air, and yet date from thousands of years ago. Although scholars and UFO buffs debate how and why the figures were created, one thing seems clear: their existence is valuable. They’re impressive examples of artwork from ancient cultures and must therefore be preserved—not just for historical reasons but for aesthetic reasons. Destroying them, or allowing them to deteriorate, would be tantamount to defacing a painting in a museum.

So one might reasonably conclude that if an even larger and more impressive geoglyph were discovered, similar care should be taken to preserve it for the appreciation of future generations. Just such a figure was discovered in July 1998—on barren, public land out in the middle of an Australian desert, no less—but authorities ranging from government officials and Aboriginal leaders to prominent anthropologists immediately denounced it as vandalism and graffiti. The subject matter could hardly be considered controversial: it’s a giant line drawing of an Aboriginal hunter as he would have looked in the 19th century. Only two things truly set this image apart from others of its kind. First, it’s brand new: it was clearly created during the first half of 1998. And second, rather than relying on mysterious ancient artistic methods, it was made using modern technology—tractors and GPS receivers. But as with the older geoglyphs, no one knows for sure who made this one or why, and that’s the most maddening issue.

A pilot named Trec Smith discovered the figure while flying over the area on June 26, 1998. Located about 35 miles (60km) from the township of Marree in central Australia, the figure came to be known as the Marree Man. It’s over 2.6 miles (4.2km) in length, making it not only the world’s largest geoglyph, but the world’s largest artwork of any kind. The image shows a naked man with his hair tied back in a knot known as a chignon, which, along with a headband and a distinctive pattern of initiation scars on his chest, identifies him as an Aborigine. He’s holding what appears to be a throwing stick, which would have been used to hunt birds. But the only way to see the whole image is from the air or from space. The lines are as wide as 115 feet (35m), and they were made by carving about a foot (30cm) into the red soil.

Close examination revealed that the carving was done using a plow pulled by a tractor, and because of the width of the lines, the work may have taken as many as 16 passes—over a period of up to two months. Presumably the creator or creators used a combination of satellite imagery, computer graphics, and GPS mapping to plot out a series of markers on the ground and then simply followed the path with the tractor until the lines had reached the desired width. Interestingly, had they dug just a bit deeper, they would have exposed a layer of white chalk beneath the soil (much like that seen in the Uffington White Horse), which would have made the image more visible and more durable. As it is, within months the lines had begun to fade, due to natural erosion and plant growth. They’re still visible in satellite photos, but not nearly as prominent as they once were.

After the site’s accidental discovery, anonymous press releases began showing up giving details about the drawing. The wording of the press releases suggested that they may have been written by an American; this notion was strengthened by the discovery of several objects at the site, including an American flag, a note referencing the Branch Davidian cult, and a satellite photo of the figure. Some suspected that American soldiers stationed at a nearby base may have done the work, while others thought the American wording and objects were simply a decoy to divert suspicion from those who were really responsible—perhaps one of several Australian artists, a group of construction workers, or members of the Australian military. As media attention grew, experts publicly debated the details of the image, questioning whether the man was holding a stick or a boomerang, and whether it was an accurate representation of any particular tribe or perhaps a combination of features from two or more groups. All the while, regional officials expressed their outrage at the so-called vandalism, police followed up on clues to the perpetrator’s identity (though no crime had actually been committed), and although Marree might have benefitted from an influx of visitors, the area of the geoglyph itself was blocked off to access by tourists.

Several months later, a fax sent to a hotel in Oxford, England pointed officials to a plaque buried at the site, which contained a quote from H.H. Finlayson’s book The Red Centre: Man and beast in the heart of Australia; the context of the quote helped to identify which tribe the man pictured was supposed to have been from (the Pitjantjatjara tribe) and suggested strongly that the weapon he was holding was indeed a stick. However, the identity of the artist was still unknown. Eventually the publicity, as well as the image, began to fade, and official investigations were called off.

Later, attention focused on Australian artist Bardius Goldberg, who died in 2002. He was known to have both the skills and the resources to create a work of this sort; he had expressed an interest in creating a work of art that could be seen from space; and he apparently received a large sum of money at the time of the Marree Man’s discovery. He carefully avoided either refuting or confirming claims that he was responsible, which in some people’s minds is the equivalent of admitting he did it. We may never know for sure, but it does seem clear that no efforts will be made to preserve this artwork for the future. What a pity: the first generation with the technology to easily create and appreciate this art form ends up being the first to shun it.

Note: This is an updated version of an article that originally appeared on Interesting Thing of the Day on August 23, 2006.