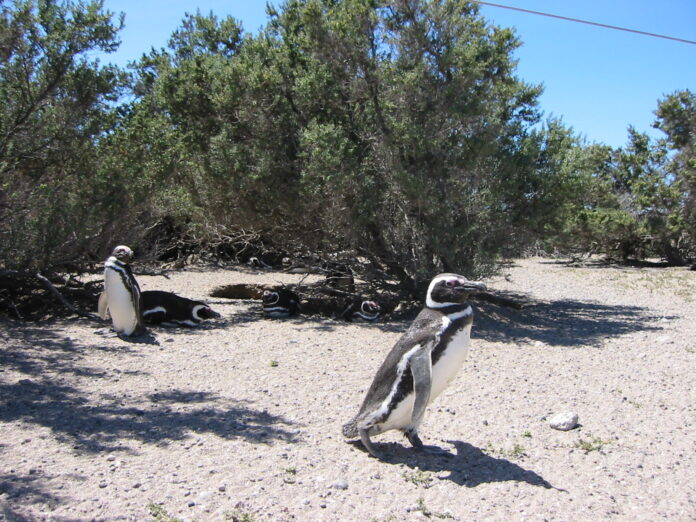 I was not expecting penguins to be interesting.

I’ve seen penguins at zoos; I’ve seen them at SeaWorld; I’ve seen them on TV and in movies. The novelty of encountering a flightless bird that lives on the ice, looks like it’s wearing a tuxedo, and waddles comically when it walks wore off by the time I was five years old. Penguins make good material for comic strips and jokes, and a fine mascot for open-source computer operating systems. But that, I assumed, was pretty much that. I knew that we would see penguins in the wild on our trip to Patagonia back in 2004, but I figured that would make nothing more than a nice embellishment to the story, as in, “We were so close to Antarctica, we even saw penguins!” Not a whole lot else to say, right?

Then we actually saw them, and I realized that almost everything I thought I knew about penguins was wrong. All at once, the novelty returned. What I learned about penguins in Patagonia could have been found in any encyclopedia, but somehow seeing them in person made the information sink in as it never had before.

Our first encounter with a penguin—of sorts—was in the baggage-claim area of the tiny airport in Trelew, Argentina. A large sign said, “Welcome to Patagonia,” and nearby stood a gigantic penguin statue. There could be no doubt what the area’s primary tourist attraction was.

We drove south about 150km (90 miles) through the flattest and most featureless plains—nothing but sparse yellow grass and ankle-high brush as far as the eye could see in every direction. Finally we turned onto a dirt road and headed out toward the Atlantic coast, where the arid steppe abruptly gave way to ocean, without any intermediate region of vegetation. We had entered a wildlife preserve called Punta Tombo where, our guide said, about half a million Magellanic penguins came to breed each year. A small portion of the preserve was open to carefully supervised tourists, who could walk freely among the penguins—as long as we agreed not to touch them, disturb them in any way, or in fact come any closer than a meter to any of the birds.

The first thing I noticed when we got out of the van was the temperature. It was early summer in the southern hemisphere, and therefore reasonably warm, even this far south. Certainly there was no snow or ice to be seen, and we were quite comfortable wearing short-sleeved shirts. I had, perhaps naïvely, always thought that penguins lived only in very cold climates, but here they were in droves quite merrily hanging around like so many tourists basking on the beach on a bright summer day. Even more surprising was that their nests were burrows carved out of the dry, sandy soil under small shrubs and bushes. If you didn’t happen to be facing the ocean, you could easily imagine yourself being in the middle of a desert, and the penguins didn’t fit my image of desert fauna. Nor were the nests uniformly close to the shore; some of them, we were told, were as far as several kilometers from the ocean, meaning that the penguins returning from a fishing trip might have to walk an hour or more across the plain to get home.

All in the Family

Magellanic penguins are the most common of the 17 penguin species. All penguins live in the southern hemisphere, but most of them live much farther south. Couples are generally monogamous; each year during breeding season a female lays two eggs, and when the chicks hatch about six weeks later, they’re covered with fuzzy gray feathers. Often only one chick survives to adulthood, but most of the nests we saw had two. The male and female take turns caring for their offspring. While one goes off to fish for about two weeks, the other stays home with the kids. The parent who has just returned from sea regurgitates squid and small fish for the youngsters to eat, and the other parent then takes a turn fishing. As a result, it’s quite unusual to find an entire family of four home at the same time. When the chicks are about two months old, they are able to fish for themselves, so they sever their ties with the parents and set off on their own.

During the winter, Magellanic penguins can migrate as far north as Brazil on the Atlantic coast and Peru on the Pacific coast. But the following spring when the parents return to the breeding grounds, they almost invariably find the same nest they’d occupied the year before, no matter how far it is from the shore or how many thousands of other nests there are nearby. This cycle may continue for the penguins’ entire lifespan of 20 years or more.

Virtually everything I noticed about the penguins surprised me. I was astonished at how swiftly and gracefully they swam, how efficiently they lived, how skillfully they raised their families. All these facts, of course, are old news to anyone who knows anything about penguins. But since I had never absorbed anything other than the most superficial information, it was like discovering an entirely new animal. As we drove back from Punta Tombo, we did see entirely new animals—at least ones I’d never seen before, such as guanacos, rheas, and Patagonian hares. But more interesting than all these was the eye-opening experience of seeing something I thought was familiar for the very first time.

Note: This is an updated version of an article that originally appeared on Interesting Thing of the Day on January 24, 2005.