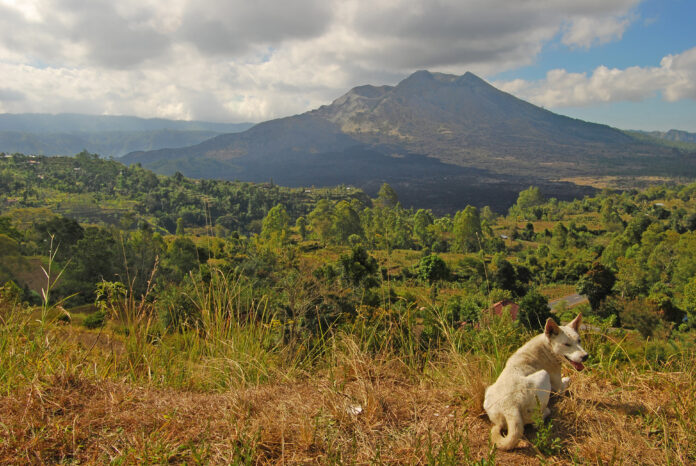 On our most recent trip to Indonesia, Morgen and I were reading Simon Winchester’s 2003 book Krakatoa, a history of the devastating 1883 eruption of the eponymous volcano (known locally as Krakatau). A couple of hundred pages into the book, the volcano hasn’t yet erupted, but we’ve learned about Darwin, the spice trade, Dutch colonization, and a long list of other things that, in one way or another, illuminate the circumstances surrounding that cataclysmic blast and how it affected the world at that time. Just as Winchester gets ready to describe the big bang itself, he mentions the fact that animals sometimes appear to be aware of an imminent seismic event, changing their behavior markedly just before it happens—often by fleeing, but sometimes by making noise or otherwise acting erratically.

Winchester writes: “There is no firm scientific evidence that there is a connection, nor is there a true basis for a new pseudo-science called ethogeographical prediction, which seeks to forecast earthquakes by observing carefully calibrated animal activity.” He says that while some geologists concede that animals might sense changes too subtle to register on modern instruments, no one has been able to prove a connection between animal behavior and impending earthquakes or volcanic activity. Nevertheless, a good deal of anecdotal evidence supports this notion, including a particularly interesting tale of a circus elephant that seemingly “predicted” the Krakatoa eruption.

I was unaware of the existence of anything called “ethogeographical prediction,” but I always enjoy learning about wacky pseudoscientific undertakings. So I consulted the usual search engines and found exactly one page on the entire web that mentioned the phrase “ethogeographical prediction”; it was a review of Winchester’s book. (There are now at least two, including this one!) I then tried searching on “ethogeology” instead and found another, different page—also a review of the book. Great, but I was no better informed as to who is engaged in this study or with what result. A quick scan of the book’s bibliography provided no obvious clues, either, so it could be that Winchester himself coined the term or that it simply hasn’t caught on widely yet. In any case, it’s clear that ethogeology is a portmanteau of ethology (the study of animal behavior) and geology.

Nothing to See Here

Even though no one referred to ethogeology by name, I did find lots of information about how animals behave oddly before various kinds of natural disasters. The way writers often address the subject matter is by asking, rhetorically, whether this proves that animals are psychic, have E.S.P., or are in some other way supernaturally gifted. In most cases, the writers end up debunking such claims, but I find it troubling that the question is even asked in the first place. I’m pretty sure it’s common knowledge that dogs have a superior sense of smell and that bats use echolocation to find their prey, to take two common examples of animal abilities that exceed those of humans. This, I can assure you, is more of the same—nothing mystical at all is going on.

Unfortunately, no one can yet demonstrate by precisely what mechanism animals apparently become aware of an upcoming earthquake. One theory is that certain animals can hear ultra-low-frequency sounds generated by seismic activity just before an earthquake. Another is that they can feel tiny vibrations in the ground when a quake is brewing. Based on these theories, some researchers are trying to construct measuring devices that mimic the anatomical structures that might be picking up the noises or vibrations. If they work, they could provide some hard data that might lead to more reliable early warning systems. But that’s a big “if.”

I Smell a Volcano

As a matter of fact, we don’t currently know for sure whether animals can be aware of future seismic events at all. It seems that they can, but even if so, clearly this is true only for certain animals, in certain situations, at certain times—which is a little unsatisfying scientifically. Supposing that someone could prove this adequately, the next step would be to quantify it. What does a particular behavior of a particular animal indicate? In order to use animals to predict earthquakes, we’d need a little more to go on than “if Spot starts growling, there might be an earthquake soon.” It could also mean that Spot is hungry, for instance. Getting any truly reliable data is going to be awfully hard, because you’ll never reproduce, in a controlled laboratory setting, the exact conditions of an impending volcanic eruption; nor can you interview your test subjects to find out what they hear, feel, or think.

Seismic events are not the only disasters animals are said to predict. I’ve read stories of animals behaving strangely just before hurricanes, typhoons, and thunderstorms, for example. To study these phenomena, however, we’re going to need an entirely new field: ethometeorology, a term that was, surprisingly, found on zero other webpages before today. I predict linguistic storms in the near future.

Note: This is an updated version of an article that originally appeared on Interesting Thing of the Day on February 13, 2007.