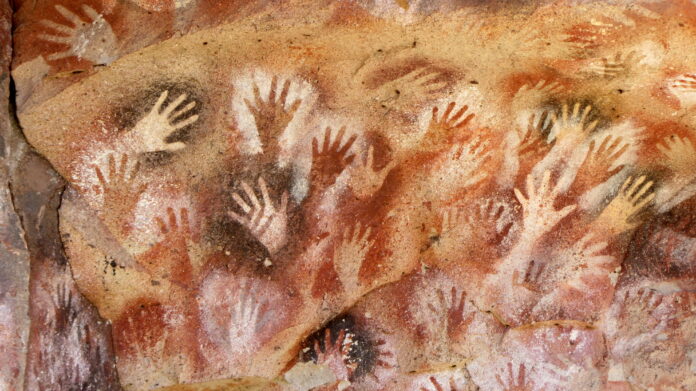 Patagonia being a rather large area, I was unable to visit all the spots that interested me when I went there in 2004. One that, unfortunately, I didn’t have time for was La Cueva de las Manos, or “the cave of hands,” in south-central Patagonia. A UNESCO World Heritage site, it’s one of the world’s oldest outdoor art museums; its most striking characteristic is hundreds of stenciled paintings of human hands. And the paintings were made using a primitive but highly effective form of spray paint.

Handing It to Them

Like so many things in Patagonia, the name “Cueva” is a bit of a misnomer; the so-called cave is more of a shallow indentation in a cliff face with overhanging rock. At first glance, the walls appear to be covered with hand prints. On closer inspection, it’s clear that the hand shapes themselves were not painted or imprinted on the walls; instead, you see empty spots in the shape of hands with halos of paint around them. The borders are too diffuse to have been painted with brushes; it looks like someone pressed a hand on the wall and then spray-painted around it to form the image—a process known as negative stenciling. And in fact, this is exactly what happened. The artists apparently blew liquid pigments through small tubes—perhaps the hollow bones of birds—to create the images.

Because most of us consider spray-painting a relatively recent invention, these paintings give the impression of being modern art; the impression is heightened by the deep, vibrant colors. In fact, the oldest of these paintings dates from at least 7,300 BCE, and perhaps earlier. The earliest contributors to the cave were known as Toldense; millennia later, Tehuelche artists were still adding new figures—the most recent paintings were made around 1,000 BCE. Hands are not the only subject, by the way—also pictured are human figures and local animals such as guanacos (relatives of the llama) and rheas (flightless birds that look like miniature ostriches). The paints, of which there are many distinct colors, were made from a variety of substances, including the Calafate berry and mineral pigments. A layer of sealant made from guanaco fat and urine helped to protect the paintings from the elements for all these years.

The Right Way to Paint

A frequently mentioned statistic is that only 31 of the more than 800 hand prints are of a right hand—as though this should be a surprise. Assuming most of the artists were right-handed (which is statistically likely), it’s only logical that they’d use their dominant hand to direct the pigment while using the non-dominant hand as the stencil. No mystery there. It does suggest, though, that most of the artists painted their own hands, as opposed to someone else’s.

A more interesting question is the same one asked about nearly every ancient artifact: Why? Why did the ancient residents of this part of Patagonia spray-paint images of their hands all over the side of a cave wall? Archeologists have speculated, as they usually do, that the paintings were religious symbols or perhaps were made as part of an adolescent rite of passage. The latter explanation carries the disturbing implication that parents required their teenage kids to spray-paint personal tags on walls in public places. I favor the more mundane notion that everyone just thought the images looked cool. There is also, of course, the whole question of how the artists got the paint off their hands—if in fact they did. Perhaps the point was to paint the hands, and the images on the wall were nothing more than a nifty side effect. There’s just no telling with kids.

Note: This is an updated version of an article that originally appeared on Interesting Thing of the Day on February 25, 2005.