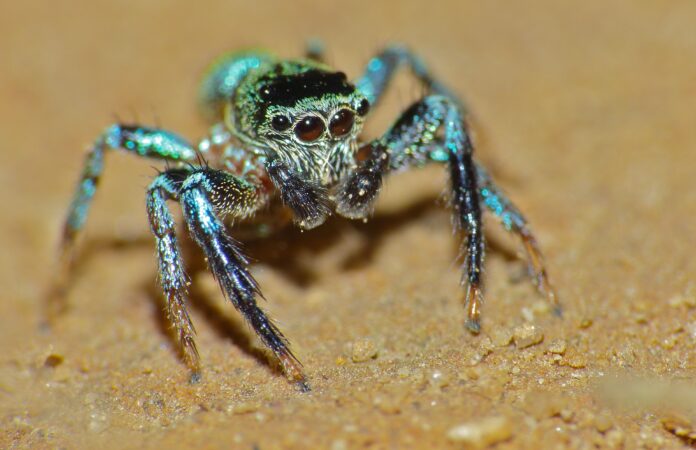 A reader wrote in with a comment about one of my articles on the fauna of Costa Rica, wondering if I’d ever written anything about jumping spiders. I didn’t see any jumping spiders (that I know of) in Costa Rica. (Though I did see one in Spider-Man. Does that count?) So I added “jumping spiders” to my list of topics to research. There were, unsurprisingly, tens of thousands of webpages to be found about the 5,000 or so species of spiders in the family Salticidae (or Salticids), commonly known as “jumping spiders.” I was sure there must be numerous interesting tidbits of information to extract, but what I found was not at all what I was expecting.

On page after page, I kept reading descriptions of jumping spiders like these: “personalities of the spider world” … “friendly little creatures that always like to jump on your camera or your fingers” … “affectionately referred to as Charlies, Herbies or Salties” … “among the most beautiful and delightful of all arthropods” … “comical, engaging” … “their anthropomorphic nature endears them to most people.” OK, wait a minute—we are talking about spiders here, right? Spiders have always been on my “avoid if at all possible” list. Even looking at pictures of them gives me the creeps. Am I really supposed to feel especially fond of a spider that could jump on me? But clearly, something about these spiders (apart from the obvious fact that they jump) has caught the fancy of a great many people—or at least, a great many spider fans.

For starters, jumping spiders are not big and scary. Although there is a great deal of variation among the thousands of species, they tend to be quite small—generally about 5–10 millimeters long. (So that much larger, so-called jumping spider Tobey Maguire’s Peter Parker sees in the 2002 version of Spider-Man was in fact nothing of the sort—it was an Avondale spider, which doesn’t jump.) And although they do use their two hind pairs of legs to jump, pouncing on their prey, even the largest jumping spiders will jump only 16cm (about 6 inches). That prey, by the way, will generally be insects—jumping spiders are harmless to humans (which is not to say they might not bite on occasion). When they jump, they leave a thread of silk attached to their starting point so that they can return easily if their attack was unsuccessful. In other words, it’s the arachnid equivalent of bungee jumping.

For those willing to get close enough to these spiders for a good look—perhaps with the help of a magnifying glass—one of the most striking features is the spiders’ eyes. All spiders have four pairs of eyes, but in jumping spiders, one of the pairs (the anterior median, or front and center pair) is unusually large. This gives them that “puppy dog” look that makes it easier to think of them as animals, rather than as “creepy things.” Jumping spiders have excellent vision, with the capability of altering their field of vision in a way that has been compared to a zoom lens. This, plus the positioning of the other six eyes, gives the spiders the visual acuity needed to identify, follow, and strike at their prey with great precision.

I Only Have Eyes for Hue

The spiders’ eyes are also sensitive to color, which is significant because some of the species also have very striking coloring—with the males typically being more colorful than the females. Some jumping spiders have elaborate mating rituals, in which the male performs an impressive and often very silly-looking dance in order to attract a female’s attention; the colored markings on the male’s body apparently figure into the female’s evaluation of the performance. (The name Salticidae, by the way, comes from a Latin root that can mean either “jump” or “dance.”)

Jumping spiders of one kind or another are found on every continent except Antarctica. They are a splendid example of adaptation, as numerous species have developed physical appearances that mimic those of other creatures. These disguises provide camouflage—in some cases, making them more effective hunters, and in others, making them less visible to predators. Some jumping spiders look amazingly like ants; others have body shapes resembling termites, scorpions, beetles, or even—I’m not making this up—bird droppings. Which just goes to show you: there’s more to jumping spiders than meets the eyes.

Note: This is an updated version of an article that originally appeared on Interesting Thing of the Day on March 30, 2005.