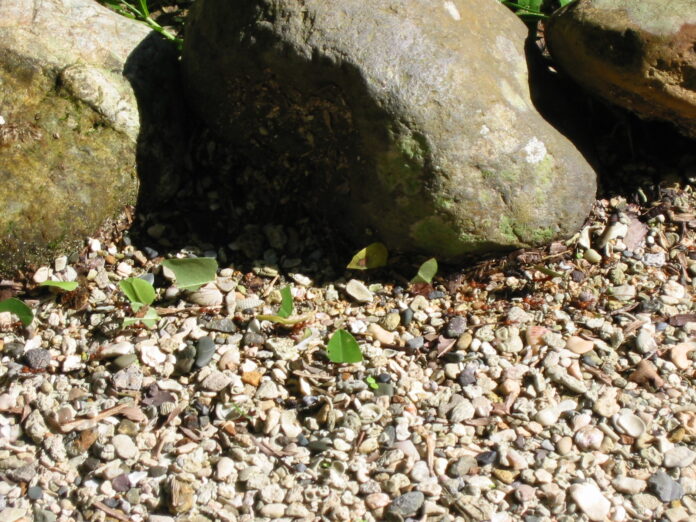 I’m a city person at heart, but every now and then I like to get far away from the chaos and soak in some nature. On the two trips I’ve taken to Costa Rica, I’ve found it ideal for such a getaway. It’s quite a contrast from my usual environment—everything from the food to the climate is different, not to mention the language, driving habits, and so on. But we adapt rapidly, as humans tend to do. After a few days, we become accustomed to the heat and, to a lesser extent, the humidity. We get used to seeing the occasional frog or lizard in the shower. The sights, sounds, and smells which were so foreign just a week earlier begin to seem commonplace. “Honey, look! Up in the tree!” one of us will say. What, another sloth, a family of monkeys, a toucan? Ho hum. Been there, done that. The novelty of such sightings wears off much too quickly.

The Ants Go Marching One by One, Hurrah, Hurrah

Such was the case with leaf cutter ants. At first you think it’s an optical illusion. You’ll glance at the ground and detect a line of movement, just a rustle. You look at a bare strip in the grass and think: The leaves can’t possibly be marching across the ground. You try to figure out what you’re seeing, whether it’s moving plants or plant-shaped bugs of some kind. On closer inspection—much closer—you see tiny ants, almost blending into the soil, carrying comparatively huge slices of leaves in a long column. Ah: leaf cutter ants. Yes, I think I read about them somewhere. They climb trees, slice up the leaves, and carry them off to their nests. Got it. Once you’ve figured out what it is, it doesn’t seem especially remarkable.

Everywhere we went in Costa Rica—rain forest, beach, and everywhere in between—we saw these long columns of tiny marching leaves. They could be fun to watch if you had nothing better to do. Once I dropped a couple of new leaves onto a trail, just to see what would happen. Sure enough, within a few minutes the ants had checked them out, picked them up, and started carrying them toward home.

Hats Off to the Soldier

A week later on a nature hike near the Arenal Volcano, our guide, Paolo, stopped the group when we came to a column of leaf cutter ants. By this time I had seen dozens of these, so I wasn’t paying much attention. Paolo picked up one of the larger ants—a soldier—and asked me for my hat. “Excuse me?” I said. I couldn’t comprehend what my hat had to do with the ant. He repeated the question. “Your hat—can I borrow it?” I stood there puzzled for a few seconds, then took off my hat and handed it to him. Paolo held the chin strap of my hat up to the ant, which pinched it between its mandibles. Then, still holding onto the ant, Paolo let go of the hat. The ant held it firmly. OK, now I was paying attention. Watching an ant carry a leaf a few times its size is mildly impressive the first time, but seeing an ant hold my hat—this was something else altogether.

The ant was apparently unharmed, but undoubtedly suffering the ant equivalent of psychological trauma. Paolo put it back on the trail and picked up another one. This time he repeated the trick with a branch. Not a twig, mind you, but a hefty branch nearly a meter long and perhaps two centimeters at its thickest point. The ant held it for only a few seconds, but that was more than enough for Paolo to make his point. These little guys are seriously strong. The mandibles seem to have a mind of their own, too: they’ll keep holding on just as tightly even if the ant dies. Because of this, they are sometimes used to close wounds in a pinch (so to speak). The technique is to hold the ant so its mandibles pinch either side of a cut, then twist the body off, leaving the head in place. A bit gruesome, but it makes a fair substitute for a suture.

This was just the beginning of the surprising things we were to learn about leaf cutter ants. The most obvious question we had was what they did with all those leaves once they got where they were going. I figured they either ate them or used them as a building material. In fact they do neither: their digestive systems can’t break down the cellulose in leaves, and they live in underground nests (which, by the way, can be enormous, holding as many as 10,000,000 ants). When the ants arrive home with their leaves, they hand them off to specialized workers that chop them up into even smaller pieces, cover them with their own droppings, and use them as a medium for growing the fungus that the ants actually eat. In other words, the ants are basically fungus farmers.

The ants and the fungus form a textbook symbiotic relationship—each depends on, and benefits, the other. The fungus thrives on the food provided by the ants, which also give it a cool, moist environment to grow in and weed out any other plants competing for its food and space. The ants also enable the fungus to propagate, which it would otherwise be unable to do. In exchange, the fungus serves as food for the ants.

Flies Can Be a Headache

Another thing we noticed was that much smaller ants would often ride on top of the leaf fragments as they made their way along the path in the jaws of the delivery ants (known as foragers). Paolo told us they serve a sort of quality control function. That may be true, but further research showed them to have an even more important and much weirder role. It seems that a bug called the coffin fly likes to land on an ant and lay eggs on its head. When the eggs hatch, the larvae burrow into the head and feed on the ant’s brain. There being so little brain to go around, there isn’t enough for both the ant and the fly, and the ant dies. Ordinarily, ants can defend themselves against the files, but not when they’re carrying a giant leaf. So the tiny tag-along ants, known as minima, defend the foragers against the nasty coffin flies.

Leaf cutter ants will travel quite a distance—up to 100 meters from their nest—to locate just the right plants to defoliate. Quite often I watched the ants pass by what appeared to my unsophisticated eye to be perfectly yummy trees right near their nest. Apparently the ants have developed a subtle art of leaf selection, choosing only the ones most conducive to the growth of their food. A large colony of leaf cutter ants can bring in as much as 34kg (75 lb.) of leaves per day, comparable in mass to the daily grass intake of a cow.

Although leaf cutter ants are sometimes regarded as a pest—they damage both food crops and ornamental plants—they do much more good for the ecosystem than damage. They aerate the soil and produce nutrient-rich fertilizers. The symbiotic relationship they have with the fungus they use for food is a favorite research subject among biologists. And, of course, for jaded tourists like me, they provide both entertainment and a reminder that there are more interesting things around us than meet the eye.

Note: This is an updated version of an article that originally appeared on Interesting Thing of the Day on April 3, 2003, and again in a slightly revised form on January 31, 2005.