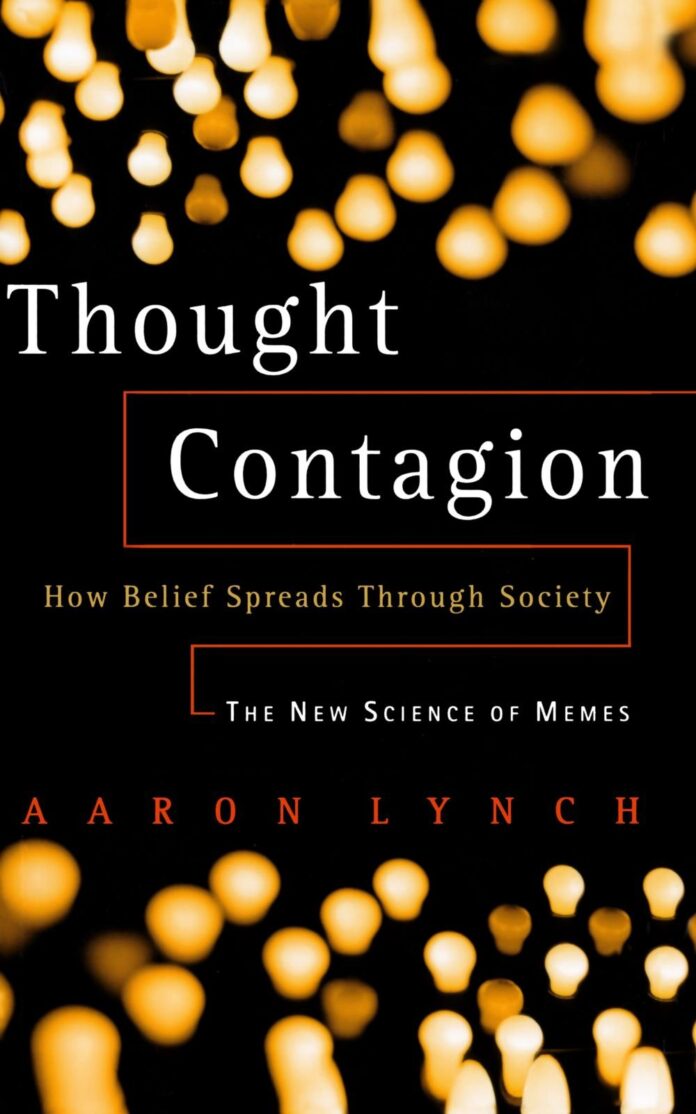 In popular parlance, the word meme denotes an idea (often expressed in the form of a picture or video) that has spread rapidly throughout the internet—something that catches people’s interest or imagination instantly and makes them feel compelled to share it. If you hear about a tweet or Instagram post or YouTube video that has “gone viral,” that’s at an example of what most people these days would call a meme. But that’s at best a simplification of what the term originally meant. The richer meaning behind that word turns out to be quite interesting.

A number of years ago, a friend of mine gave me a book for my birthday called Thought Contagion, originally published in 1996. I had not heard of the book or its subject matter, the science of memetics, but I was fascinated by what I read. Author Aaron Lynch explained, concisely and convincingly, how some of the most significant beliefs in society came to be as popular as they are. By the end of the book I felt I understood, for the first time, a great many things that should have been obvious all along. I was even more surprised to discover that the things Lynch was saying were considered novel, and even somewhat controversial. What he described, simply and elegantly, is a compelling theory about the way beliefs spread.

What Memes May Come

The fundamental term in memetics is meme, which in the academic sense means any self-propagating idea. The term was borrowed from sociobiologist Richard Dawkins, who coined it in his 1976 book The Selfish Gene. Roughly speaking, memetics applies the principles of evolution by natural selection to beliefs. In conventional evolution, genes that improve an organism’s ability to survive endure in future generations and spread throughout a population; those that hinder survival eventually disappear. By analogy, memetics says that ideas are subject to natural selection as well; those that most effectively promote their own survival multiply and spread, while those that don’t, don’t.

In memetics, it is misleading to think of a person as having a belief; instead, it is more accurate to think of beliefs as acquiring people. Memes propagate from person to person in a manner analogous to the way viruses spread. A meme is passed from one person to another through one form of contact or another, and in some cases must mutate in order to continue surviving and spreading. Thus memetics is sometimes described as an epidemiology of ideas, investigating them in much the same way as a researcher might study the way a disease spreads throughout a community. This is not to say, of course, that all ideas that spread are negative ones, as the analogy to disease might suggest. Memetics itself is neutral with regard to the value of beliefs, and the principles apply equally to positive, useful beliefs as to destructive ones.

Being Fruitful and Multiplying

Just as a virus can spread by floating through the air, by skin contact, or through exchange of bodily fluids, there are a number of different mechanisms whereby beliefs spread. One of the most common and effective means of spreading a meme is simply having children, because children more often than not serve as hosts for the same memes as their parents. Thus memes that encourage procreation directly (“your biological clock is ticking”) or indirectly (“abortion is murder”) serve to propagate themselves to the children of the meme’s host. Similarly, memes that make it more likely that parents will pass a belief on to children (such as “children should respect their parents”) encourage their own propagation.

Another common mechanism of meme propagation is proselytism. Consider the meme “those who do not believe in Religion X will spend eternity in hell.” This meme aids its own propagation, because holding the belief increases the likelihood that it will be transferred to other hosts. A person who considers belief in Religion X crucial to eternal happiness will be motivated to influence its adoption by friends and even strangers (not to mention offspring). This meme also illustrates other methods of propagation, such as discouraging hosts from dropping the belief (persistence of the belief, especially at the time of death, is regarded as crucial to its effectiveness) and resisting efforts of competing memes (such as “all religions are equally good”) to displace it.

Gimme Some Truth (or Not)

Of the other methods of meme propagation, surprisingly, one of the least effective is for a meme simply to seem true. The sheer force of logic can and does cause memes to spread (as in “the Earth revolves around the Sun”). But more often than not, competing memes with other methods of propagation win out over those that depend solely on truth or plausibility. In particular, political and moral beliefs (which typically spread by offspring production, proselytism, and dropout prevention) usually displace beliefs whose only mechanism of reinforcement is objective fact. This could help to explain, for example, how a nation might muster public support for a war in the absence of objective evidence of danger from an enemy. If you think carefully about it, you may be able to come up with one or two other recent political examples.

The basic principles of memetic theory that describe the ways in which beliefs spread, persist, and recede, can account for the rise and fall of numerous widespread beliefs, including economic trends, pro- and anti-abortion movements, terrorism, racism, diet fads, and hundreds of other memes. It can explain how TV programs or radio talk shows gain and lose popularity, why less effective technologies win in the marketplace over more effective ones, and how public opinion can shift rapidly on many major issues.

My predominant thought while reading Lynch’s descriptions was, “Well, of course that’s why so many people believe such-and-such. It’s obvious. How could it be any other way?” And yet, that is precisely what’s interesting about memetics: it points out and explains things that should have been obvious all along, but weren’t. Although Thought Contagion is written for a general audience and therefore avoids complex mathematics, memetic theory is in fact a very serious science, backed up by increasing amounts of highly technical analysis. Very few professionals currently consider themselves full-time memeticists, and that’s a pity; I think it’s a field that could use some serious attention. A better scientific understanding of precisely how and why beliefs spread just might lead to more successful public education and better defenses against misinformation.

Note: This is an updated version of an article that originally appeared on Interesting Thing of the Day on June 20, 2003, and again in a slightly revised form on December 16, 2004.