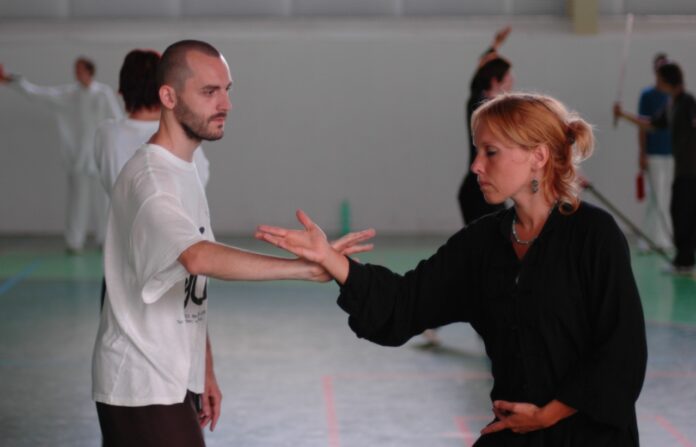 Most people who have heard of t’ai chi know it as a gentle, flowing set of movements that senior citizens do in the park on Sunday mornings. At first glance, it doesn’t even appear to be a martial art, in that each person is doing the same movements without coming in contact with anyone else, like some sort of slow-motion, silent line dance. The solo form, however, is just one aspect of t’ai chi. This sequence of postures is designed to strengthen the legs, improve posture, balance, and circulation, and teach the basic principles of shifting weight, relaxing, and remaining rooted (among other things). For all its benefits, though, this aspect of t’ai chi is just the beginning for serious practitioners. What I and many other t’ai chi enthusiasts find most interesting about the art is a two-person exercise known as push hands (sometimes referred to as “pushing hands,” as that sounds more grammatical in English).

Push hands is sort of like a gentle, cooperative game, or perhaps a cross between dancing and sparring. The basic idea is to maintain your balance while causing your partner (not “opponent”) to lose balance. However, the one who loses balance is actually the “winner” in the sense of learning more. By being pushed off balance, you become aware of areas of tension in your body, so the whole challenge of push hands is to identify and correct those areas—to relax completely and learn how to neutralize or redirect incoming force. Counterintuitively, a person who is completely relaxed will be nearly invincible at push hands, because you can only unbalance someone who is tense or resisting in some way. This is much harder than it sounds, because it feels extremely unnatural to yield to, or blend with, a push rather than resisting it or fighting against it.

Unlike sparring in karate or even other “internal” martial arts such as aikido, push hands typically involves very little movement. There are no kicks, punches, or throws, and it is quite rare for anyone even to fall to the ground. (When you have successfully unbalanced your partner, it is considered good form to grab their hand to keep them from falling.) Sometimes accomplished players can push someone halfway across the room with a minimal amount of energy, but this serves little purpose other than to show off. The point is not to pin or disable your partner, but rather to help them relax.

What does push hands look like? In general, players stand facing each other with their hands in light contact with each other’s arms. As one person’s arms move, the other person follows the movements, keeping both hands in contact at all times. A player may push against the other person’s arms, chest, shoulders, or waist; the person receiving the push yields by turning the waist and redirecting the pusher’s arms in a variety of ways. Pushing and yielding continues, often in a circular fashion, until one person is “uprooted,” with one or both feet losing contact with the floor; then the cycle continues. If you were to watch two skilled push-hands players in action, you may see barely any movement, as each person gently feels for a point of tension in the other person’s body to push against. All at once, someone’s hand will move, the other person will stumble, and the two partners will smile and begin again.

Although it doesn’t look like much to someone who’s never tried it, push hands is strangely addictive. Often when two strangers meet and discover they are both t’ai chi players, they will spontaneously begin pushing hands; it’s almost like the t’ai chi secret handshake. At t’ai chi workshops, conferences, and retreats, it’s as common to see people pushing hands as standing around having a conversation (and often both happen at the same time). Strangely, the more you get pushed over, the more you want to keep going until you’ve identified your area of weakness. Of course, you don’t get better by trying harder; you get better by doing less—by relaxing more.

Although there are many varieties of the t’ai chi form, push hands looks quite similar wherever it’s taught, so students of, say, the Cheng Man-ch’ing Yang style can push hands with students of the Guang Ping Yang style, Wu style, or Chen style, without feeling they’re playing by different rules. Nevertheless, there are a few different forms of push hands. The most common variety is fixed-step push hands (or tui shou in Chinese), in which both players must keep both feet planted in the same position the entire time. There’s also a moving-step push hands (san shou), which can either follow a set, choreographed pattern or be done freestyle.

The main point of doing push hands is to become more relaxed, rooted, and self-aware, not to prove your superiority over another player. There are, however, push hands competitions, in which players receive points for unbalancing their partners (or, in the case of moving-step push hands, causing the partner to step outside a marked area on the floor). Some t’ai chi teachers discourage participation in competition because they feel it’s missing the point; other teachers encourage it on the grounds that it gives students exposure to more partners and styles than they would otherwise have, and promotes diligent practice. With or without competition, however, skill in push hands only comes after months or years of consistent practice.

In some schools, push hands is taught along with the solo form; in other cases, teachers prefer the students to spend six months to a year learning the form and strengthening their legs before beginning to study push hands. Training usually begins with partners performing circular patterns of movement over and over—first with just one hand, then with both. After the basic moves and principles are learned, students begin doing freestyle push hands, in which both partners are free to move in various ways and push on any part of the other person’s upper torso. Pushing with a variety of partners gives participants the chance to work on many aspects of their technique, as each person presents a new set of challenges and opportunities for improving one’s relaxation.

There are numerous t’ai chi books that discuss push hands, but trying to learn push hands (or any martial art) from a book is like learning to dance from a book. Without someone to demonstrate in person and correct your mistakes, you’re unlikely to get very far. I should also mention that push hands requires very strong leg muscles; it may not be enjoyable at all until you’ve worked at it for several months and built up both strength and flexibility.

In my opinion, though, the most interesting thing about push hands is what it teaches on a metaphorical level. You may never use push-hands techniques to win a street fight, but learning how to yield to, blend with, and redirect energy without losing your balance is useful in any sort of conflict. That is, in fact, the ultimate goal of push-hands training: to achieve a level of relaxation and rootedness that will enable you to keep your “balance” in any situation. It’s also part of what makes t’ai chi so powerful as a martial art: the ones who prevail are those who know the secret of meeting strength with softness rather than resistance.

Note: This is an updated version of an article that originally appeared on Interesting Thing of the Day on September 3, 2003, and again in a slightly revised form on September 1, 2004.