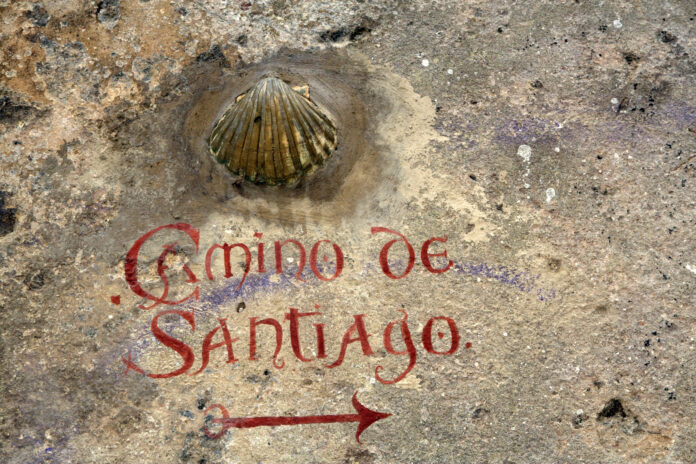 Each year, hundreds of thousands of people walk hundreds, and sometimes thousands, of miles from various points in Europe to the town of Santiago de Compostela in the northwest corner of Spain. In this town is a cathedral built over the tomb believed to be that of the apostle St. James (Santiago is Spanish for St. James). The tomb was discovered in the ninth century, and by the 12th century, the spot had become almost as popular a destination for Catholic pilgrims as Jerusalem and Rome. Not only do people still travel this route, but the number of pilgrims has increased dramatically over the past few decades—over 300,000 people made the trip in 2017.

For some people, the journey along the Camino de Santiago (Way of St. James) is a purely religious one; they are going to visit the relics of St. James, and perhaps (during a Holy Year) seek a plenary indulgence—a remission of sin. For others, the pilgrimage represents a less specific spiritual journey—an attempt to discover purpose in life, to practice physical and mental discipline, or to contemplate one’s vocation. For a few, it’s simply a themed vacation, a novel walking tour of Europe. But for most participants, whatever their motivation, the pilgrimage is much more about the journey itself than the destination.

There are many routes to Santiago. Some pilgrims begin the journey relatively nearby, while others walk across several countries over a period of many months to reach their destination. Among the traditional starting points that attract many pilgrims are Paris (about 1,200 miles/2,000km away) and Arles, France (560 miles/900km away). Although most pilgrims travel on foot, some make the journey by bike or horseback. Because the trip can be quite long, it is not unusual for a pilgrim to do it in sections—for example, walking for a week or two then returning the following year to pick up at the spot where last year’s walk ended. Images of scallop shells are used as markers all along the Camino, and travelers frequently carry or wear scallop shells to identify themselves as pilgrims.

Pilgrims beginning their journey obtain a document known as a Pilgrim Record or credencial, sometimes called a “Pilgrim’s Passport.” This is a record of one’s path; at each stop along the way, travelers have the document stamped at a local church, bar, or other waypoint. The Pilgrim Record serves two main purposes. First, it identifies the bearer as a pilgrim (as opposed to a tourist); pilgrims are entitled to free or inexpensive accommodations and meals at lodgings along the way called refugios (space permitting). Second, it provides evidence to the cathedral that the pilgrim has met their minimum requirements for a certificate of completion, known as a Compostela. The official rules stipulate that one must walk a minimum of 60 miles (100km) or bike at least 125 miles (200km) in a single stretch to qualify for the certificate, and the Pilgrim Record validates this path over a period of several days or more.

Stories of people who walk to Santiago are filled with blisters, sprains, and other injuries; overcrowded refugios; unpleasant weather conditions; exhaustion from the walking; and other misadventures of every description. (As you can imagine, the journey has inspired countless books and films too.) Nevertheless, pilgrims overwhelmingly feel that the journey was among the best experiences of their lives. Beyond the efforts and hardships are psychological and spiritual rewards that cannot be captured on a suitable-for-framing certificate.

The pilgrimage to Santiago does not require a great deal of money, other than the cost of getting to the starting point and home from Spain—and a very good pair of shoes. However, it does demand a significant investment of time and energy, and a lot of dedication. I sincerely hope to be able to make this pilgrimage myself some day, though I can’t really say why—I suspect the answer will make itself evident along the way.

Note: This is an updated version of an article that originally appeared on Interesting Thing of the Day on October 13, 2003, and again in a slightly revised form on November 15, 2004.