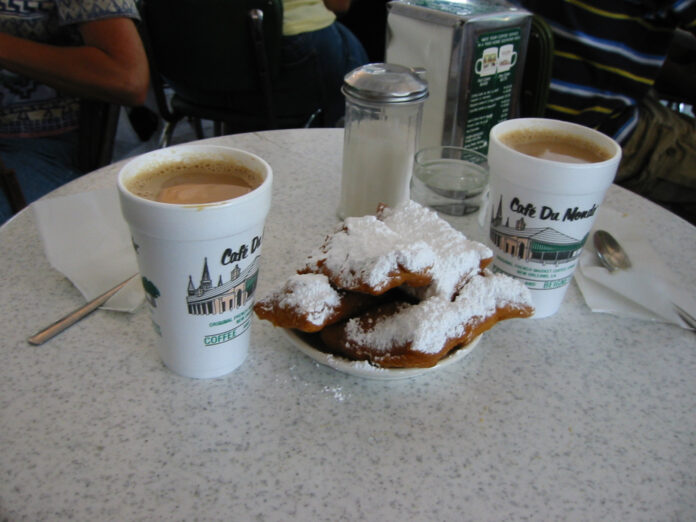 It’s 3:00 A.M. and the streets of New Orleans are filled with fog. In some of the livelier areas of town, bars are still open, the last wave of sleepy patrons thinking they might stick around to hear the band play just one more tune before calling it a night. Here, however, on the fringes of the French Quarter, the streets are quiet. Steps away from the Mississippi river, outside a building near the French Market, a man hesitates, then approaches an open window. He exchanges a few words with the person inside, and hands over some money. A small bag is offered in return. The man, clutching his purchase, hurries across the street to Jackson Square. He sits down on a secluded bench, looks around furtively, and opens the bag. Inside, all he can see is a white powder. As he reaches into the bag, he thinks to himself, “I know this is a bad idea. This stuff is gonna kill me some day, but I just…can’t…help myself.” A few minutes later, the bag is empty and the man is happy, having blissfully forgotten his reservations and guilt—and entirely oblivious of the growing effects of the toxins accumulating in his body. A telltale white residue on his upper lip, he stumbles home. Tomorrow he will repeat this ritual. Next time, he decides, he’ll order some coffee too. A nice hot drink might help to take the edge off of all that powdered sugar and grease.

The man has just been to Café du Monde, a New Orleans landmark that’s open 24 hours a day, 7 days a week. His purchase was an order of beignets, a deceptively decadent type of doughnut that made this café famous. Make no mistake about it: enough of these will kill you, all right. But you will die very happy.

Beignet There, Doughnut That

Café du Monde is to coffee shops what In-N-Out is to burger joints. Its charm lies in the utter simplicity of its menu and the quality of its product. At Café du Monde, there is but one food item you can order—beignets—along with a limited choice of beverages. And that is enough: the place is nearly always packed with customers—tourists and locals alike. It has been like this since Café du Monde opened in 1862. The store is called a coffee stand, but it’s quite large, with dozens of tables outside under the trademark green-and-white striped canopy, and more inside. On every table are plates of rapidly disappearing beignets.

What exactly are beignets? Café du Monde’s marketing propaganda calls them “French-style doughnuts,” but I’ve always found that description a bit unsatisfying. The term “fritters” might be a bit closer. Like doughnuts, they’re basically deep-fried dough. Unlike doughnuts, they’re square—about 3 inches (8cm) on a side. They’re also very puffy, consisting mostly of air if you go by volume. They are served covered with powdered sugar, and I do mean covered. I have been served beignets with a sugar coating a good solid inch (2.5cm) thick. Thus, a few beignets and a large cup of coffee will supply your full daily nutritional requirements for the four major food groups (starch, grease, sugar, and caffeine).

Café du Monde serves beignets in orders of three, and since that’s the only food item on the menu, it’s considered redundant actually to mention what it is you’re ordering. You simply say, “I’ll have an order and a café au lait.” If you arrive during peak hours you may have quite a wait in line before you get to place your order (even longer if you want a table). Follow the line around to the back of the building and you can watch through the window as the beignets are made. If you’ve ever been to a Krispy Kreme shop, this will be familiar to you, except that at Café du Monde, each beignet is tossed across the room by hand into a vat of hot oil.

Au Lait, Can You See?

Then there’s the coffee. Although you can order black coffee, orange juice, or even cola at Café du Monde, only one beverage provides the perfect accompaniment to beignets: café au lait. Most Americans know what a cappuccino or a latte is, but café au lait is relatively uncommon in North America. The recipe is simple: one part hot brewed coffee (not espresso), one part hot milk.

At Café du Monde, though, café au lait is always made from a blend of coffee and chicory, giving it a much different flavor from ordinary coffee. Chicory is the root of the endive plant, and it is roasted and ground in much the same way as coffee beans. During World War II, shipments of coffee to the United States were disrupted, and chicory was used either as a substitute for coffee or as an additive to stretch the coffee supply. These days, most coffee purists look down their noses at coffee-chicory blends, because chicory was historically a cheap imitation of the real thing. Like substituting carob for cocoa, it simply doesn’t have the same taste. But different is not necessarily bad. Café du Monde’s chicory café au lait has a wonderfully smooth flavor, and it matches the beignets delightfully.

Besides the original location on Decatur Street next to the French Market, Café du Monde has eight other shops in and around New Orleans. This includes, I’m sad to say, several locations in shopping mall food courts. Objectively, the quality of beignets found in the newer locations is no worse than the original, despite being made using shiny new equipment and being located in close proximity to generic fast-food outlets. But the experience is just not the same.

Roll Your Own (Dough)

For that matter, the same can be said of beignets you make yourself. All over New Orleans (and, of course, online) you can find beignet mix and Café du Monde’s signature blend of coffee and chicory for sale. In fact, you can buy every component of the Café du Monde experience—their mugs, spoons, powdered sugar shakers, and even napkin holders with the authentic Café du Monde menu on the side. With modest effort, you could recreate the tastes, smells, and sights of Café du Monde at home. This can be a pleasant way to spend a Saturday morning—I’ve done it myself—but you’ll never get quite the same effect as visiting Café du Monde in person.

Savvy locals will tell you, not without some scorn, that Café du Monde does not have the best beignets in town. That may be true, although the recipe is not one of great subtlety or sophistication, so variations are likely to be comparatively minor. Likewise, one could say that it’s not the best dining experience, especially considering the crowds and noise. But for my money, this combination works. Tasty (if artery-clogging) food, served quickly and inexpensively in a place with history and character: that’s my kind of café.

Note: This is an updated version of an article that originally appeared on Interesting Thing of the Day on May 6, 2003, and again in a slightly revised form on February 8, 2005.