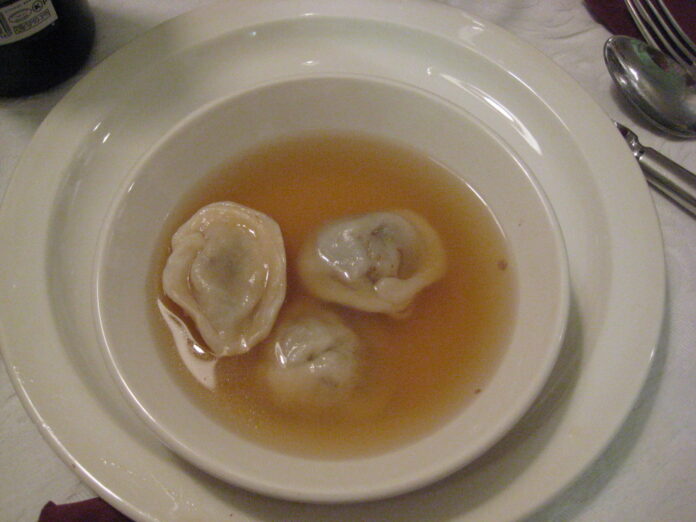 Image credit: By Zlerman [GFDL or CC-BY-SA-3.0], from Wikimedia Commons

My friend Mark Hurvitz is a rabbi, and although I’m not Jewish, we share similar opinions on many topics, both religious and secular. Around this time of year in 2003, when I was in the midst of writing a series of articles about things that are stuffed, Mark sent me an email pointing out that in the celebration of Sukkot, the Feast of Tabernacles (which begins this evening), several stuffed foods are part of the standard menu. Nearly every cuisine around the world contains stuffed foods of one kind or another. In Italy, there’s gnocchi and ravioli; in China, stuffed wontons; in Greece, stuffed grape leaves; and in America, jelly doughnuts…among many other examples. I had been planning to write about stuffed foods anyway, and I was delighted to add this new information to my list.

Sukkot (also spelled Sukkoth or Succoth) is a Jewish harvest festival that lasts seven or eight days each fall. The translation “Feast of Tabernacles” or “Feast of Booths” refers to the sukkot, portable booths or huts the ancient Israelites lived in while wandering in the desert. The biblical reference (or, rather, one of several) states:

Now, the fifteenth day of the seventh month, when you have gathered in the produce of the land, you shall keep the festival of the Lord…You shall live in booths for seven days; all that are citizens in Israel shall live in booths, so that your generations may know that I made the people of Israel live in booths when I brought them out of the land of Egypt; I am the Lord your God.
—Leviticus 23:39–43 (and I hope you’ll pardon my Gentile spelling)

Traditionally, Jewish families construct a sukkah (the singular form of sukkot) outside according to a strict set of rules that specify dimensions, building materials, and so on. The family then gathers in the sukkah to eat their meals together during the festival, which is generally considered to satisfy the requirement of “living” in the booth.

The Stuff of Legend

Although there are no explicit rules as to what foods must be eaten during Sukkot, stuffed foods are extremely common. These may include stuffed peppers, eggplants, or cabbage, stuffed fruits and pastries, knishes, kreplach, main-dish pies, or even ravioli. Though no one knows for sure, there are several theories as to how the metaphor of stuffing came to be associated with Sukkot. Some commentators liken the stuffed foods to miniature cornucopia, representing a bountiful harvest. The cornucopia originated in Greek mythology, so the terminology is not historically accurate, but the symbolism may nevertheless be correct. In terms of the harvest that Sukkot celebrates, produce such as peppers and eggplant will have been gathered recently, and Mark suggested that stuffing them with the other late-summer vegetables may represent the completion of the harvest. Sukkot also includes the notion of welcoming guests (both living and historical heroes) into the sukkah, thus “stuffing” them into a wrapper of sorts.

As much as I enjoy symbolism and metaphor, it had never occurred to me to think of stuffed foods as anything other than a culinary convenience. (Or inconvenience—I once tried, unsuccessfully, to make stuffed carrots. Don’t ask.) But now, I don’t think I’ll ever look at a ravioli (or a stuffed turkey, for that matter) the same way. You can stuff foods with the bounty of the harvest, stuff your home with guests, and then stuff your guests with food (though overeating, Mark notes, is not encouraged). That strikes me as a beautiful image of the cycle of growth and regeneration.

Note: This is an updated version of an article that originally appeared on Interesting Thing of the Day on October 10, 2003, and again in a slightly revised form on September 29, 2004.