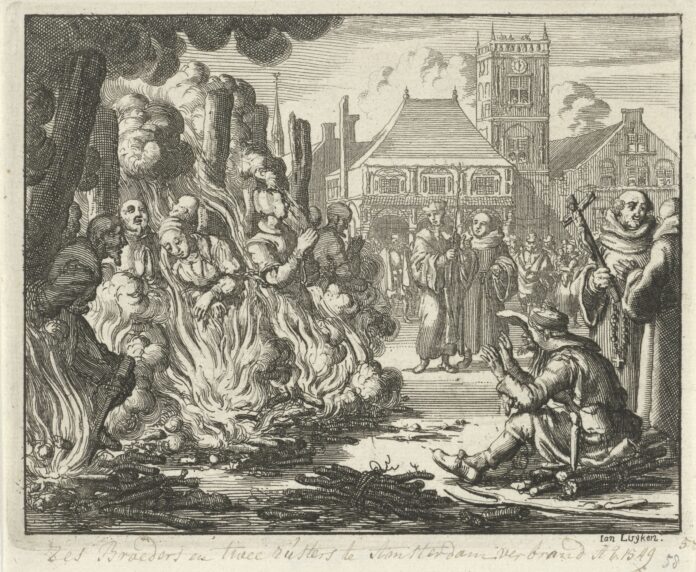 The history of Christianity is alternately fascinating and tragic—often both at the same time. I have always been amazed that the religion whose founder taught his followers to “turn the other cheek” and “love your enemies” has produced so much war, violence, and intolerance over the centuries. Equally amazing to me are the massive and seemingly irreconcilable differences between different brands of Christianity, and even between individual adherents of any particular brand. This is all the more poignant considering that, according to the New Testament, the one prayer Jesus offered for future generations of believers was “that they may be one”—he hoped that by their own unity, they would demonstrate the unity of God. Things…didn’t turn out quite that way.

Many of the divisions within Christianity arose because someone perceived a problem and, reasonably enough, tried to correct it. More often than not, attempts at reform resulted in still more violence and fragmentation. But a certain oft-neglected thread of church history also stands out as one of the bloodiest, quite ironically because those responsible for the movement were pacifists. The movement was known as Anabaptism, and it survives to this day as a form of Christianity that is neither Catholic nor Protestant—a third way.

The story begins in the early 1500s. The excesses and corruption of the Roman Catholic church had reached epic proportions. Immorality among priests and bishops was blatant and widespread, and the pope was selling indulgences to pay for construction of St. Peter’s Basilica. Feeling that the church’s mission had become one of greed, not of genuine spirituality, Martin Luther nailed his famous 95 theses to a church door in Wittenberg, Germany in 1517. Luther denounced the decadent state of the church and called for reform. He wanted to rid the church of practices that he felt were not supported by scripture—things like the authority of the pope, the veneration of Mary and the saints, the notion of purgatory, the celibate priesthood, and many others. Luther’s complaints didn’t make him any friends in Rome, but he did manage to attract quite a large following of people who wanted the Church to return to what they felt were its core values. This movement became known as the Protestant Reformation, because its followers were protesting the status quo of Catholicism.

At nearly the same time in Switzerland, another reformer named Ulrich Zwingli was making waves. Zwingli believed most of the same things as Luther, but wanted to take reforms even further. He wanted to dismantle the traditional church hierarchy and allow each congregation to choose its own leaders. Zwingli also insisted that communion was merely symbolic, whereas Luther kept to the notion of a “real presence” of Christ in the sacrament of bread and wine. Although Luther and Zwingli could not see eye to eye, they and their followers were after many of the same things, and were equally disliked by Rome.

Among Zwingli’s followers in Zürich were Conrad Grebel and Felix Manz. Grebel and Manz agreed with the reforms proposed by Zwingli and Luther, but as they studied the Bible, they became convinced that neither set of reforms went far enough. What they wished for was a return to the simpler ways of the earliest first-century believers as depicted in the New Testament. The modern church had strayed far from this ideal, they felt, and needed much more than reform—it needed a complete rethinking of its basic tenets.

At the top of their list of gripes was the State Church. To be a citizen was to be a member of the church and subject to its rules. While the state government ultimately answered to Rome, it was also true that it could dictate locally what the church could and could not do. Grebel and Manz believed that church membership should be voluntary, and to this end proposed the shocking notion of the separation of church and state. The government, they felt, served one purpose and the church, another. To regard civil rulers as divine agents was asking for trouble, as history had shown all too often.

Grebel and Manz also held that the New Testament teaches pacifism, which ruled out believers participating in any sort of military service or condoning capital punishment. But the issue that caused the greatest stir was that of infant baptism. The Roman Church, in its state-sponsored mandate to assimilate all citizens, received newborns into church membership by way of mandatory baptism. Grebel and Manz, however, found no precedent for infant baptism in scripture. Instead, they argued, baptism was a symbolic act that should be undertaken voluntarily by adult believers as a sign of their faith. Since infants could not decide to believe, it was meaningless to baptize them. Accordingly, in 1525, Grebel took the daring step of rebaptizing an adult believer in his group, and others quickly followed.

What’s so daring about pouring water over someone? At that time, the church—which, recall, was inseparable from the state government—recognized two heresies worthy of death. One was denying the Trinity, and the other was baptizing someone a second time. The reason the church took this so seriously is that baptism symbolized control. To be baptized into the church implied obedience to the church; to accept another form of baptism was tantamount to treason. Grebel, Manz, and their followers were soon labeled “Anabaptists”—a Greek word meaning “rebaptizers.” This was no mere description, either, but a cruel epithet, spoken with venom and scorn. It had the psychological import of calling someone a “terrorist” today. True or not, it could get you in very deep trouble. The early Anabaptists themselves did not use that term, not only because it was dangerous but because they disputed its accuracy. If an infant was baptized, they reasoned, that was not a true baptism because it was not by choice; so baptizing that person as an adult was not really rebaptism at all.

The Anabaptists were considered the worst kinds of heretics—not only by the Roman Catholic church, but also by the reformers, with whom they shared so many other beliefs. Both camps saw Anabaptists as a tremendous threat to their authority and control, and began to hunt them down and persecute them relentlessly. Unlike the reformers, Anabaptists rejected the use of violence or force, which, alas, made them easy prey. The classic 1660 Dutch book Martyrs Mirror details the lives and deaths of thousands of Anabaptists who were martyred for their beliefs in the sixteenth and early seventeenth centuries.

Despite this persecution—and in some cases, because of it—Anabaptists multiplied and spread across Europe. In 1536, a Dutch Catholic priest named Menno Simons joined the Anabaptist movement and soon became one of its leaders. Within a decade, Dutch Anabaptists came to be known as “Mennists,” which later evolved into “Mennonites.” But Mennonites are not the only group to trace their origins back to the sixteenth century Anabaptists. Other offshoots of this movement developed into the Amish, Quakers, Brethren, Hutterites, and (of course) Baptists—among others.

Historically, although Anabaptists are neither Catholic nor Protestant, in a way they’re hyperprotestant—they outreformed the reformers, and paid dearly for it. Adult baptism will no longer get you burned at the stake, and the doctrine of the separation of church and state, far from being heretical, is now accepted dogma in most western nations. But the Anabaptist ideals of a simple faith and a simple lifestyle are just as interesting today as they were in the 1500s—and the principle of nonviolence just as radical. A poster that was once popular in Mennonite churches read: “A Modest Proposal for Peace: Let the Christians of the world agree that they will not kill each other.” See what I mean? Utterly crazy.

Note: This is an updated version of an article that originally appeared on Interesting Thing of the Day on April 10, 2003, and again in a slightly revised form on March 13, 2005.