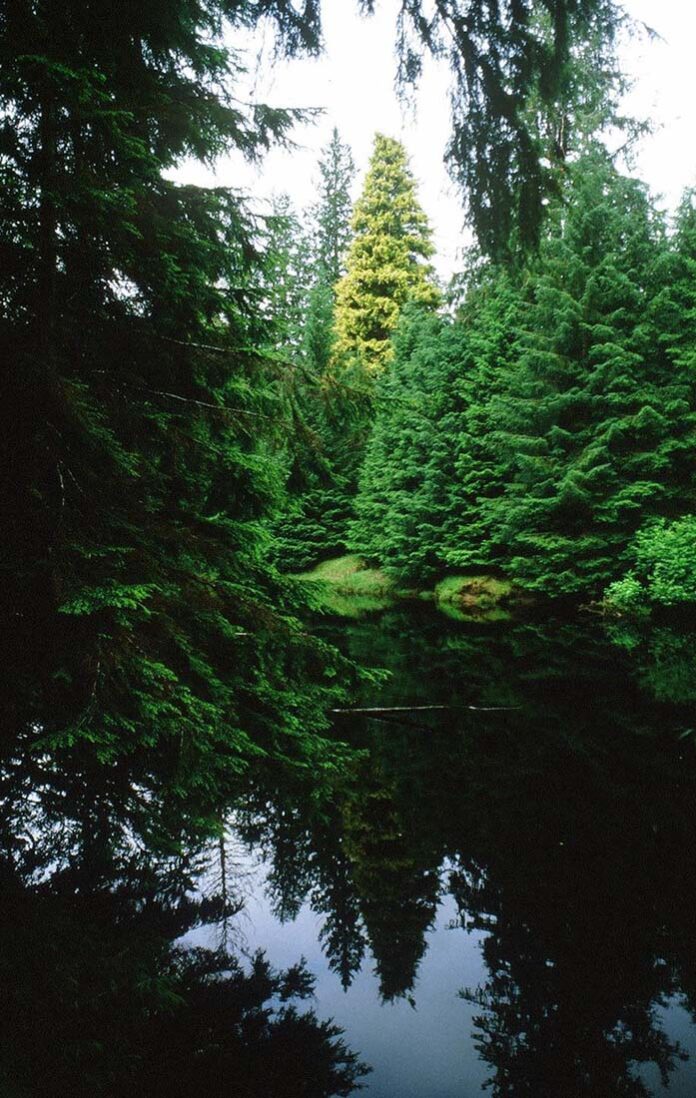 During the three years I lived in British Columbia, Canada, I worked in an office overlooking the Fraser River. Just a few doors down from our building was a Weyerhaeuser lumber mill, and I regularly saw logs being towed down the river and floating in a holding area just off the river bank. I was vaguely aware of various political issues involving the wood, such as the ongoing conflicts between loggers and environmentalists and the tariffs imposed by the United States on imported soft wood lumber. But as I was a temporary resident, these problems held little interest for me, and I never formed much of an opinion one way or the other. The only thing that truly puzzled me was the fact that the logs sometimes went in the direction of the mill and sometimes in the opposite direction. I never did figure that one out.

What I did not know at the time was that in 1997, less than two years before I’d arrived, one particular tree in a distant corner of the province had been at the center of a huge news story. One way of framing the story was that an important cultural icon had been destroyed by an ecoterrorist, who may still be at large today. Whether or not that’s an appropriate spin on the tale is open to debate, but it’s certainly true that an old tree known as the Golden Spruce met an untimely end for reasons that are dubious at best, sending an entire community into an uproar.

Not far off the west coast of British Columbia, up near the Alaskan border, lie the Queen Charlotte Islands, known locally as Haida Gwaii. Many of inhabitants are Haida, an indigenous (or “First Nations”) band. Their oral history includes a story very similar to that of the Biblical tale in which Lot’s wife is turned into a pillar of salt when she turns around to witness the destruction of Sodom and Gomorrah. In the Haida version, an old man and a young boy were running away from their village, which the Creator had buried with snow to punish its wicked inhabitants. Against the old man’s warnings, the boy looked back at the village and was therefore turned into a very unusual tree, known as Kiidk’yaas (“Old Tree”).

The tree in question was botanically a Sitka Spruce, but its needles were golden instead of green, and it had grown in a conical shape that is highly atypical for this species. These characteristics were due to a rare genetic mutation, one which ordinarily would have been fatal to the tree. But a unique combination of environmental factors in the tree’s vicinity allowed it not only to survive but to flourish, reaching a height of about 160 feet (50m). In 1997, it was roughly 300 years old, and under favorable conditions it might have lived another 500 years or so. The Haida revered the tree, and even though it was located on land leased for logging by MacMillan Bloedel (now owned by Weyerhaeuser), the company had set aside the area and turned it into a tourist attraction instead of cutting down the trees.

Grant Hadwin had made a career out of surveying logging roads, but had become disillusioned with the job when he saw entire forests disappear. He became a vocal environmentalist, advocating selective, sustainable logging practices. But he did so in what many would consider a mean-spirited and unproductive way, regularly lambasting everyone from lumber company executives to politicians and the media in antagonistically worded letters. He seemed particularly unhappy with those he called “university-trained professionals,” whom he blamed for pretty much all the world’s environmental atrocities. As his career tanked and his protests became more feverish and bizarre, friends and family worried that he’d become unstable.

After dark on January 20, 1997, Hadwin swam across the frigid Yakoun River, bringing with him a chainsaw and other tree-felling apparatus. He cut the Golden Spruce in such a way that only a thin column in the center remained intact, so that it would fall over with the next strong wind. By the time the tree fell two days later, Hadwin had already sent letters to the media, the lumber company that leased the land, and the Haida authorities. In the letters, Hadwin admitted to destroying the tree, claiming that he did so as a “wake-up call.” In Hadwin’s thinking, the public wasn’t seeing the forest for the tree: they were greatly concerned about this one unusual tree but ignored the massive deforestation going on all around it. He felt that by cutting down the special tree, he’d call attention to this fact and somehow rally support to his cause.

Unsurprisingly, his actions had the opposite effect. The Haida were outraged and grief-stricken; they even held a memorial service comparable to a funeral for the fallen tree. Environmentalists and the lumber company were equally upset, and of course this would also prove to be a blow to tourism. Hadwin was arrested and charged with criminal mischief (a felony) and illegal cutting of timber. The police released him on his own recognizance, pending a trial date about a month later on a nearby island. Hadwin could have taken a ferry or plane to the trial, but he chose to go by kayak instead, claiming that he was afraid he’d be lynched by the locals. He was last seen five days before his scheduled court appearance, paddling north toward Alaska, which may or may not have been a roundabout route to the island where he was supposed to go.

Four months later, the wreckage of his boat was found on the shore of an Alaskan island about 70 miles (115km) north, but there was no sign of Hadwin himself. Based on the state of the equipment in the wreckage and other details of how it was found, some investigators speculated that Hadwin ditched the craft intentionally as a decoy and is still alive and well—possibly in Alaska or even in Russia. Others believe he was killed, either intentionally or accidentally. Authorities in both Canada and Alaska are still keeping an eye out for him, but his fate may never be known.

Meanwhile, the Golden Spruce may yet live on—in a way. Cuttings were taken from the tree immediately after it fell and grafted onto ordinary Sitka Spruce trees. In addition, a sapling that had been grown from a cutting taken in 1977 was planted right next to the original tree’s stump. No one knows whether any of these trees will grow up to have the Golden Spruce’s distinctive color and shape, or whether they’ll even survive at all. At best, there may be a tree that bears some resemblance to its ancient ancestor, but it’ll never be the same as the one from the Haida legend. Folklore centuries from now may have to explain why all this barbed-wire fencing grew up around a certain funny-looking tree.

Note: This is an updated version of an article that originally appeared on Interesting Thing of the Day on September 11, 2006.