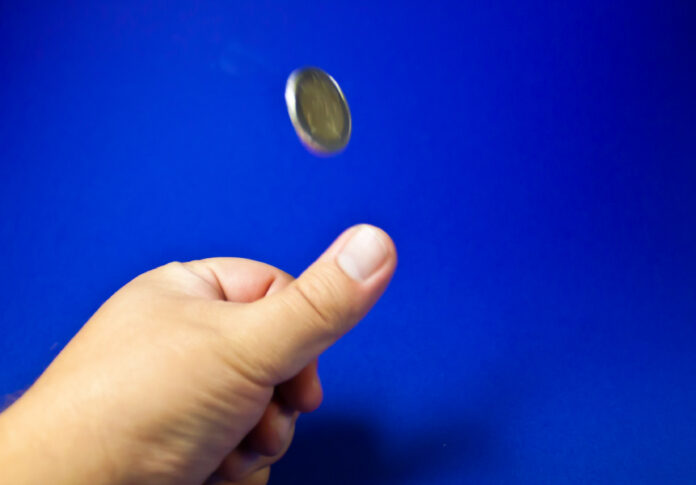 Tom Stoppard’s 1967 play Rosencrantz and Guildenstern Are Dead is a hilarious take on the lives of two minor (and more or less interchangeable) characters from Hamlet. A lot of the dialog has to do with the philosophical question of destiny. At the beginning of the play, Rosencrantz and Guildenstern are tossing coins, and incredibly, 100 consecutive spins come up heads until a “lucky” toss finally comes up tails. This nicely illustrates the futility of the characters’ actions and also puts them squarely in some alternative reality—we all know that in the real world, coin tosses are random and the odds against a coin coming up heads 100 times in a row are mind-bogglingly high. We depend on this fact; otherwise, all the bets and disagreements that have been settled by this simple selection mechanism must be in doubt.

When I wrote about rock, paper, scissors tournaments, I made a passing reference to my favorite “binary random number generator,” a coin toss. A reader sent me a note saying that wasn’t quite accurate—coin tosses are not truly random. Talk about shaking the foundations of my faith. What insidious conspiracy could be behind this astonishing claim? Or could it simply be that a bunch of statisticians had entirely too much time on their hands?

To Err Is Human

Common sense tells us that a coin toss is random because we have no way to predict its outcome. We don’t know how many times a coin will spin in the air before landing, and we have no way of controlling the number of spins precisely; ergo, the outcome must be random. Now, “random” does not mean the same thing as “evenly distributed,” so the fact that a coin comes up the same way repeatedly doesn’t mean the result wasn’t random, although when there are only two options, the math tends strongly in that direction. So the greater the number of identical consecutive results, the more one begins to suspect that some unknown factor is biasing the coin one way or the other. Indeed, if you flip a coin 20 times, it will usually come up heads about half of the time. Random numbers being random, it may not be exactly 10 heads and 10 tails, but the larger your sample size, the closer you’ll likely get to a 50:50 ratio.

However, it turns out that when it comes to humans tossing coins, it really is a matter of uncertainty and inaccuracy rather than true randomness. Two Stanford University professors, mathematician Joseph Keller and statistician Persi Diaconis, did extensive research and experimentation [PDF] regarding coin tosses. Keller showed mathematically that the only way to obtain a truly random coin toss is to make sure it spins around its exact geometrical axis, something no human could do with the necessary precision. And even then, one would have to assume that the number of spins in any given toss was random. After all, coins, like everything else, must obey the laws of physics. Therefore, if you tossed a coin exactly the same way twice—taking into account velocity, angle, air resistance, and other physical variables—it would have to land exactly the same way both times. Diaconis had a machine built that does exactly that, and it can faithfully deliver 100 heads or 100 tails in a row by taking all the human variability out of the picture.

Of course, the effectiveness of the machine is based on the coin’s starting position. Given the number of spins its mechanism creates for every coin toss, the coin will end up on whichever side was up when it started. (Had the machine been designed to use a little more force or a little less, the coin would have ended up on the opposite side each time.) Diaconis wondered if even for humans with our built-in randomizing flaws, there might be a similar bias—a statistical likelihood that a given initial condition will make a given final condition occur more frequently. He used a high-speed camera to capture coin tosses and then performed a geometrical analysis of the images. His conclusion was that for coins flipped and then caught on the back of the hand, there is a bias: they’re slightly more likely to end up on whatever side they started on. But that’s slightly, as in a 51% chance rather than a truly random 50% chance. So for all practical purposes, a coin toss is effectively random.

One of the things Diaconis observed, which accounts for part of this bias, is that sometimes coins don’t actually flip all the way over in the air, even though they appear to. A combination of spin and wobble can produce the optical illusion that the coin is flipping when in fact the same side remains up the entire time it’s in the air. If that happens just once out of 100 times, there’s your 51%. But this bias applies only when the coin is caught in midair. If the coin is allowed to hit the ground, other variables come into play, and the likelihood of a different result increases. (So the coin tosses that begin football games, for example, probably do not show any preference for landing on the side that was facing up initially.)

There’s yet another aspect to the randomness of a coin toss: bias built into a coin itself. We assume that coins are evenly weighted, but some have more raised material on one side than the other, making that side slightly heavier. The usual example is the U.S. penny; the side with Lincoln’s portrait has more metal than the tails side. This difference is too small to change the outcome when the coin is being flipped through the air, but it can be seen if the coin simply falls over on a table. According to Diaconis, a penny spinning on its edge will land tails up 80% of the time. However, another writer, Ivars Peterson at Science News, claimed something a bit different: A penny balanced on its edge (but not spinning) will fall over heads up most of the time, whereas a spinning penny will (as Diaconis suggested) land tails up more often. You know where this is going, of course: I had to try it myself.

I took 10 pennies and balanced them carefully on their edges. I then banged on the table (per Peterson’s instructions) and noted the results. I repeated this procedure nine more times, just to be thorough. This experiment bore out Peterson’s prediction: the coins came up heads 64% of the time (and in two trials, all 10 came up heads). Then I tried spinning all 10 pennies, one at a time. Again, after noting the results, I tried nine more trials with each of the pennies. This time, my results differed dramatically from what both Diaconis and Peterson had predicted: the pennies came up heads 54% of the time. Of course, my table may not have been perfectly flat or perfectly level, and my pennies may have had imperfections too. But then, that’s the whole point of a coin toss: not knowing all those minute variables that may affect the outcome.

Interestingly, in the course of this test, there were four consecutive trials in which the results were five heads, five tails. That was what I found truly amazing: it seemed inconceivable that the results could be distributed evenly so many times. What are the chances? Although mathematics may say “close to 100%,” common sense says otherwise. In any case, I’ve learned two valuable and contradictory lessons. First, given human imperfections, coin tosses are random enough for all practical purposes. And second, always call heads.

Note: This is an updated version of an article that originally appeared on Interesting Thing of the Day on May 25, 2005.