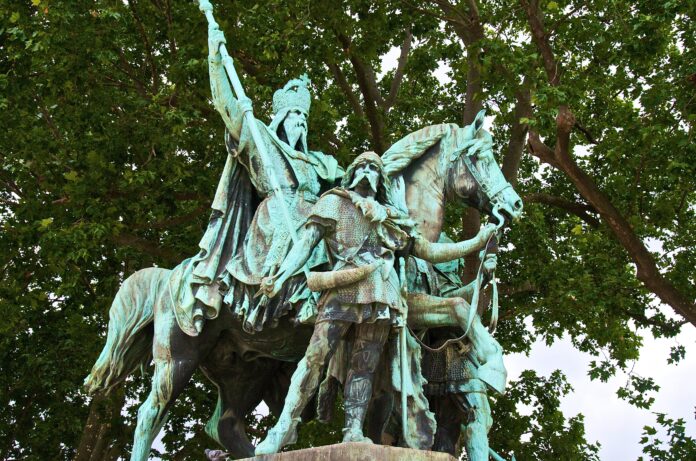 If you asked me to name any three subjects at random about which I know very little, I might very well mention biology, statistics, and genealogy. Somehow I managed to get through high school, college, and graduate school without ever taking a biology course. My mathematical studies never progressed much beyond garden-variety trigonometry. And when it comes to genealogy, my efforts to trace my paternal lineage beyond my great-grandparents has been entirely unsuccessful. So you can imagine my dismay when a friend of mine told me about the notion of a Most Recent Common Ancestor (MRCA). Apparently some Very Smart People had determined based on genetic evidence and statistical calculations that everyone of European ancestry now alive descended from Charlemagne. At first I found this claim utterly ridiculous, but as I began reading up on it my incredulity softened to mere incomprehension. For me, at least, this is a rather challenging idea to wrap my brain around, but to the extent I’ve been able to understand it, I find the implications truly fascinating.

Let’s start with a few uncontroversial facts. You were directly descended from two parents, four grandparents, eight great-grandparents, and so on. So as you go back in time, the number of your ancestors increases. Go back far enough and you’ll find millions or perhaps billions of forebears in your personal lineage. The same, of course, is true for everyone else. But as you go back in time the total population of the world also decreases, meaning that the further back you look, the more likely you are to encounter someone who was a common ancestor of any two random people alive today. So far so good? OK, the question then becomes: How far must you go back in time to find someone who is a common ancestor of everyone alive today? And for bonus points, who might that have been?

You might be tempted to think you have to go back all the way to the beginning of the human race, however you care to define that. Of course, some of the earliest humans were ancestors of us all—but it turns out that we also share common ancestors who lived much more recently. There are a couple of ways to figure this out.

One approach is to look at your DNA. DNA that live in the parts of cells known as the mitochondria are normally passed on to children only by the mother. This means that your mother, her mother, her grandmother, and all her female ancestors share the same mitochondrial DNA. This DNA is relatively stable, but tends to undergo tiny mutations at predictable intervals over thousands of years. Since scientists know how often such changes occur, they can calculate, based on any two samples of mitochondrial DNA, how many generations ago the two individuals had a common ancestor. By examining hundreds of samples from all over the world, researchers have determined how recently a woman could have lived who is a direct ancestor of everyone tested, which by extension implies nearly everyone in the world. Their estimate is 150,000 years, give or take 50,000—and they’ve dubbed this hypothetical woman “Mitochondrial Eve.” This is not to say anyone believes she was the first woman, or the only woman alive at the time. She may have had tens of thousands of contemporaries, any number of whom also had descendants. But she was the only one alive then whose mitochondrial lineage persists in living humans today—the most common matrilineal ancestor.

Of course, this only tells you about our most recent common maternal ancestor. What about Adam? Well, just as mitochondrial DNA is passed on relatively intact only from mother to child, the Y chromosome is passed on only from fathers to sons. Using the same sort of “molecular clock” that indicated how far back a common female ancestor was, geneticists have determined that the most recent male ancestor of everyone currently alive—called “Y-chromosomal Adam”—lived about 60,000 years ago (again, give or take a few tens of thousands of years).

DNA, however, doesn’t tell the whole story. For one thing, DNA studies can produce MCRA estimates based on female ancestors or male ancestors, but not both at the same time. And although each of your parents gave you half of their DNA, you may be aware that for any given gene, there is less than 100% probability that it will be passed on to one’s children. Thus, you cannot be at all certain that you got exactly one-eighth of your DNA from each of your great-grandparents. The farther back in time you go, the greater the probability that any given gene of an ancestor was not passed on to you. In other words, you may have any number of ancestors with whom you share no DNA at all.

A completely different approach neatly sidesteps these issues and uses simple math (well, actually, rather complicated math) to show statistically how long ago a Most Recent Common Ancestor existed—based on both male and female lines. Yale statistician Joseph Chang wrote a 1999 paper entitled “Recent Common Ancestors of All Present-Day Individuals.” If his many pages of equations, theorems, and proofs are to be believed—and even Chang says his figures probably don’t account for all the facts—we could have a most recent common ancestor who lived as recently as 1200 CE. More recent research and computer simulations have pushed that date back to perhaps 300 CE, but that’s still a far cry from 60,000 years ago.

Looking for a Date

However, Chang’s paper proves something much more surprising. According to his calculations, there was a date in the not-too-distant past at which all individuals were either ancestors of everyone alive today, or ancestors of no one alive today. This date varies depending on what portion of the population you look at, but for Europe, it would seem to be in the neighborhood of 800 CE—the year Charlemagne, king of the Franks, became emperor of Rome. And because Charlemagne is known to be the ancestor of some people alive today, that must mean he was the ancestor of all people of European descent. Of course, we pick on Charlemagne because he’s so well known, but he doesn’t have any special status as a common ancestor. In reality, about 80% of the people living in Europe at Charlemagne’s time were also ancestors of everyone from the West.

If this is a bit mind-boggling, it’s just the tip of the iceberg. Dr. Mark Humphrys, a professor at the School of Computing, Dublin City University, has analyzed the results of Chang’s work as well as numerous other academic papers and come up with some startling conclusions. According to Humphrys, everyone in the world is descended from the Egyptian royal house (ca. 1600 BCE), and almost everyone in the world is descended from Confucius (ca. 500 BCE). Moreover, he claims, nearly every Muslim, Jew, and Westerner is descended from the Prophet Muhammad (ca. 600 CE). I don’t have the mathematical kung fu to evaluate these claims thoroughly, but they certainly are thought-provoking. Even scarier: the thought that thousands of years from now, I could be the ancestor of everyone alive.

Note: This is an updated version of an article that originally appeared on Interesting Thing of the Day on June 25, 2004.