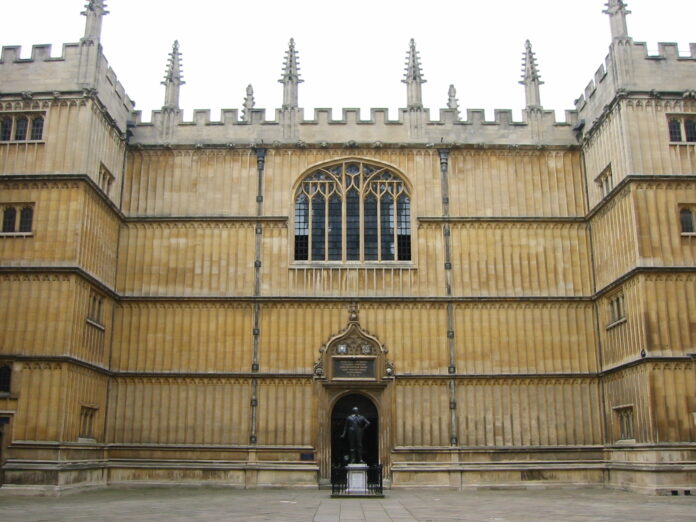 Oxford, England is a city known for its connections to literature. It is the home of Oxford University, whose former students or faculty included C.S. Lewis, Aldous Huxley, J.R.R. Tolkien, Lewis Carroll, and Oscar Wilde, among many others. Oxford University Press is also a prestigious publisher, best known for its academic and reference books, including the gigantic and definitive Oxford English Dictionary. The city of Oxford has a number of wonderful bookstores, several shops dedicated to Alice in Wonderland paraphernalia, and tours (by bus or foot) of the former homes and hangouts of the best-known authors. The smell of old books—one of my favorite aromas—lingers in the air. In short, it is a great place for people who love books, and it was therefore an essential stop on my first trip to England.

Where Forests Go When They Die

Oxford University, composed as it is of over 30 individual colleges, has many libraries. But the most impressive and well-known library on campus—indeed, one of the most impressive anywhere—is the Bodleian Library. The library, which is administered by the university itself rather than any of its colleges, traces its roots back to 1320, when the first university library was established at Oxford.

In the early 1400s, the university library was so small that all the books could fit in a single chest. Then Humfrey, Duke of Gloucester made a generous donation of about 280 manuscripts, and in 1444, the university decided to construct a new library to house them. Because of the large sum of money they had to raise, construction was not complete until 1488. But 60 years later, King Edward VI, a Protestant, instituted a law designed to remove all remnants of Roman Catholicism from the English church. By the fairly broad definition of what constituted a potentially corrupting influence, the vast majority of Humfrey’s books were destroyed, or at least recycled. The leather from some of the covers was turned into gloves; other books were burned, sold, or kept by the Reformers for their own purposes. Today, only 16 of those original 280 books are known to survive. By 1556 the library was emptied of its furniture and taken over by the Faculty of Medicine.

In 1598, however, Sir Thomas Bodley, a Fellow of Oxford’s Merton College who had married a rich widow, made a large donation to bring the library back to life. In addition to money earmarked for the restoration of the building and its furniture, Bodley donated a number of books and solicited further donations from others. When the new library opened in 1602 it contained 2,500 books. It was Bodley’s innovation to store the books on their ends rather than on their sides as had previously been the custom; this not only allowed more books to fit in a smaller space but also made them more easily accessible. Over the next few decades the library’s collection grew rapidly, and when Bodley died in 1613, he left money to the library for expansion of its facilities. As time went on and the collection continued to expand, further additions were built, and several other independent libraries were absorbed into the Bodleian.

Because of the incalculable value of many of the library’s holdings, two strict policies were enforced from the very beginning. The first was that books must never leave the library. All requests to borrow books were summarily refused—including requests by King Charles I and Oliver Cromwell. The other policy was that no fire may be brought into the library buildings. For this reason, the library was completely unheated until 1845, when Victorian engineers installed channels in the floor to carry hot water into the building after being heated in boilers outside. The library also lacked artificial lighting until 1929. Reliance on the sun for light and heat kept the library’s hours of operation quite short—as little as five hours per day during the winter.

However, the library also follows another traditional policy that is considerably more liberal: scholars from any university in the world are given free access to the library as readers, and those without a university affiliation can become readers by paying a nominal fee. The only stipulation is that all readers must swear this oath: “I hereby undertake not to remove from the Library, or to mark, deface, or injure in any way, any volume, document, or other object belonging to it or in its custody; nor to bring into the Library or kindle therein any fire or flame, and not to smoke in the Library; and I promise to obey all rules of the Library.”

Books by the Mile

The Bodleian Library is one of several copyright deposit libraries, which means that it automatically receives a free copy of all books and periodicals published in Britain. (The library purchases tens of thousands of foreign publications each year to supplement this collection.) The library currently holds well over 12 million printed items, which occupy more than 130 miles (210km) of shelving. Each year, the collection grows by more than 100,000 books and nearly 200,000 periodicals; these volumes expand the shelving requirements by about 2 miles (3.3km) annually. Much of the library’s vast storage space is in underground tunnels built in the early 1900s, and the newest building opened in 2015. Readers may not browse the stacks freely; each book must be requested in advance and retrieved by a librarian. The system of requesting and delivering books ensures that the library knows the exact location of every volume at all times—down to the particular chair in which each reader is sitting.

Given the age and rarity of some of the library’s holdings, conservation is a major concern. Light levels are kept low to prevent ink from fading; gloves are required for reading some of the older manuscripts; and for many years books were chained to the shelves. Despite these worries, though, the library maintains that it is not a museum—scholarship comes before conservation. To prevent access to the books, even though it carries a risk of damage, would be to miss the whole point of having a library.

At the end of our tour, our guide was careful to point out the benefactors’ register, a large stone plaque listing some of the library’s most prominent donors over the last six centuries, names rendered in Latin for optimum effect. There was space left for just three or four more names. If I ever acquire a fortune, the Bodleian Library will be one of my first philanthropic targets. Donors get to sit inside and smell the books for as long as they like.

Note: This is an updated version of an article that originally appeared on Interesting Thing of the Day on May 28, 2003, and again in a slightly revised form on October 18, 2004.