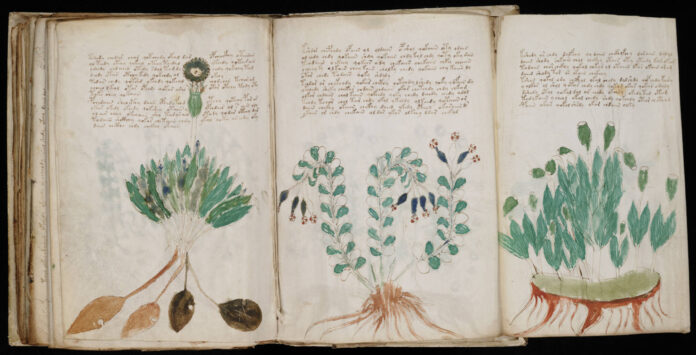 Thirty-odd years ago, a friend of mine named Eddie spent about 10 minutes creating a simple substitution cipher, and handed me a little key to memorize—each letter of the alphabet represented by some other letter, number, or symbol. I still remember most of that cipher, which we used to pass each other countless notes during boring classes in high school, and if I happened upon one of those notes today, I have no doubt that I could read it easily. We weren’t planning a conspiracy or pondering the mysteries of the universe, we just wanted to be sure that if one of our messages fell into the wrong hands, we wouldn’t get in trouble for making fun of the teacher or admitting we hadn’t done our homework.

About four centuries earlier, someone developed a rather more sophisticated code and hand-wrote approximately 240 pages of it using a quill pen on vellum—complete with colorful illustrations of plants, stars, naked women, and other assorted figures. Whatever this book is, it clearly required an extraordinary amount of time, effort, and care. It also, very likely, made its author quite wealthy. And yet, to this day, no one knows for sure who wrote it, what it says, what language it’s in, or whether it really says anything at all. Linguists, historians, and cryptographers have spent many decades poring over it and subjecting it to every conceivable form of analysis, only to reveal that there are more questions than answers. This text, known as the Voynich manuscript, is one of the last great unsolved cryptographic puzzles.

Wilfrid Voynich, an American antique book dealer, discovered the manuscript in 1912 in the library of a Jesuit college in Frascati, Italy. Believing it to be extremely valuable, he purchased it and brought it back with him to the United States. The text itself is written in a completely unique script, which suggests that it’s a cipher of some kind. The characters, which are presumably letters, do not correspond to any known alphabet. They are separated into groups that appear to be words, but lack any punctuation. The book as a whole is divided into several sections, each with distinctive drawings and other individuating features.

A cover letter inserted in the manuscript, written by one of its owners around 1666, claims that Roman Emperor Rudolph II had originally purchased the book for a sum equivalent to tens of thousands of dollars in today’s currency, and that Rudolph believed it to have been written by the 13th century English Franciscan friar Roger Bacon. The letter does not say, however, from whom Rudolph acquired the manuscript. Voynich himself apparently believed Bacon to have been the author, and enlisted the aid of the nation’s top cryptographers to decipher it.

Over the next several decades, as one expert after another weighed in on the text, several interesting findings emerged. Bacon’s authorship was disproved fairly decisively, and most estimates put the manuscript’s creation somewhere between the mid-15th century and the mid-16th century. Analysis of the text showed many patterns typical of natural language, though it clearly is not a simple cipher of English, Latin, German, or any other European language. On the other hand, some features of the text, such as the range of word lengths and the frequency with which some words are repeated, seem remarkably unlike any known language.

Much Ado about Nothing?

Some researchers have suggested that the text is an attempt to transcribe a Chinese dialect. Others say it’s a representation of Hebrew. Still others believe it’s an exquisitely coded message in some Romance language. And then, predictably, there are those who say it’s the language of angels—or maybe aliens. In any case, no credible translation of the text has appeared, despite many attempts.

The illustrations in the Voynich manuscript—which, I should add, are mostly rather crude drawings—suggest that it covers such topics as botany, cosmology, and pharmacology. There are some indications that it may be an alchemical or mystical text, too, though this is largely speculative. The biggest question facing researchers is whether the text is about anything at all.

The fact that the manuscript has resisted all efforts at decoding has led many people to suspect that it’s not a code at all—it’s simply nonsense, very cleverly disguised as language. In 2003, Gordon Rugg, a professor of Computer Science at Keele University, demonstrated that using a simple device called a Cardan grille, someone could have formed words from a fixed set of prefixes, roots, and suffixes that exhibit language-like patterns similar to those in the Voynich manuscript. In other words, it could have been a hoax—and if so, Rugg thinks the most likely culprit is Edward Kelley, a 16th-century English spiritualist who believed in alchemy and was known to be a forger.

Although Rugg’s work is interesting, it’s far from definitive. It proves only that the manuscript could be a hoax—and even if it is, that doesn’t eliminate the possibility that there is actual coded text hidden within it somewhere. And according to some researchers, at least, Rugg’s solution does not account for some of the important features of the text. In any case, if the manuscript is actually gibberish, there would be no way to prove that with complete certainty.

Now, I’m not saying the manuscript isn’t a hoax. In fact, I lean toward the opinion that it is. But what troubles me is the lack of clarity about what it was supposed to be a hoax of. Presumably, if someone spent months creating the manuscript with the expectation of selling it for a small fortune, the forger must have had a compelling story to tell the prospective buyer about the document. Was it represented as being a recipe for eternal youth, a treasure map, a message from aliens, or what? No one seems to know for sure, and the answer may never be found. All I can say is that if I saw an old page full of incomprehensible ciphered text and doodles of naked women, I’d immediately assume I was looking at a high school student’s notebook.

Note: This is an updated version of an article that originally appeared on Interesting Thing of the Day on April 17, 2005.