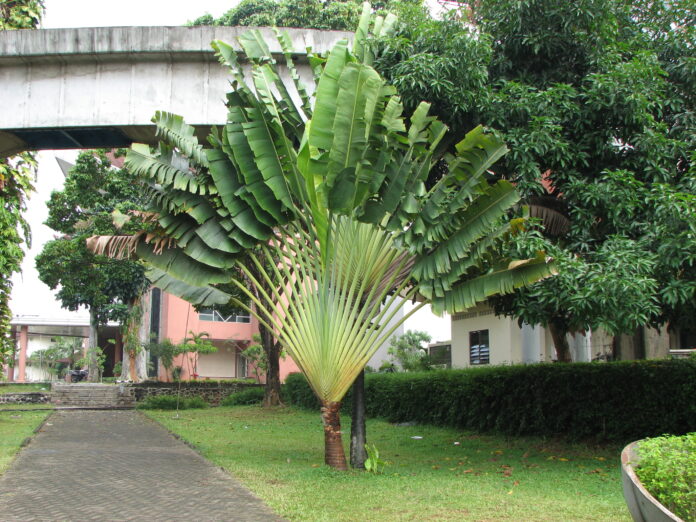 One of the reasons I like to travel is to be reminded how interesting seemingly ordinary things can be. On a trip to Costa Rica in the early 2000s, I had many such opportunities. Just walking into a local market made my eyes widen when I saw Tang in no fewer than eight flavors (Lime, Mango, Apple, Peach, Mandarin, Pineapple, and Strawberry—in addition to the original Orange). A little thing, but the novelty gave me a lot of joy.

Most of the interesting things I found in Costa Rica, however, were natural ones. In the middle of a long drive from San Jose to the Caribbean town of Puerto Viejo, our group stopped at a restaurant for lunch. In front of the building, just a stone’s throw from the edge of the rain forest, was a tall plant that caught my eye. It looked exactly like a fan, with each of its long branches terminating in a single broad leaf. Not only was it nearly two-dimensional, it was completely symmetrical. It looked so perfect I wasn’t sure it was real. Our guide told us it was called a Traveler’s Palm. Later, when I moved to San Diego, I started seeing these everywhere, but at the time, they seemed as exotic as Peach Tang.

A Tall Drink of Water

While visiting a botanical garden, a botanist shared some fascinating details about this striking plant. For starters, the Traveler’s Palm (sometimes called Traveler’s Tree) is not really a palm at all, although the trunk gives it that appearance. It’s closely related to bananas (as you might guess from the shape of the leaves) and in the same family as the bird-of-paradise flower—indeed, the Traveler’s Palm has flowers that look very much like bird-of-paradise flowers, but with different colors. The Traveler’s Palm gets its name from two distinctive characteristics. First, the leaves collect water and channel it into the base of the plant, so a thirsty traveler could cut a hole in the soft trunk and get a significant amount of drinkable water—about one liter per branch. Second, Traveler’s Palms tend to grow in an east-west direction, with each new branch turning either toward or away from the sun. So it can also serve as a sort of compass, to put you back on track after quenching your thirst.

The Traveler’s Palm, which goes by the scientific name Ravenala madagascariensis, is native to Madagascar, but can be found in tropical and subtropical regions all over the world. If you live in an area with the right climate and enough space, you can even grow your own. Its major requirements are sunshine, water, and protection from freezing and high winds. The trees can grow to be as tall as 60 feet (18.3m), so they’ll be much happier outside than inside.

Open Your Palm and Make a Wish

A few websites claim that there is a saying, “If you stand directly in front of a Traveler’s Palm and make a wish in good spirit, it will come true.” As far as I can tell, that saying exists only on the web—I have been unable to locate evidence that this is a genuine part of any culture’s folklore. On the other hand, a small biotech company called Shaman Pharmaceuticals once investigated substances produced by Traveler’s Palm as a potential treatment for adult-onset diabetes, with very promising preliminary results. That would certainly be a wish come true for many people. Unfortunately, the company has now gone out of business, and as far as I know, no one has yet picked up where their research left off.

Whether or not Traveler’s Palms can grant wishes or stabilize your blood glucose level, they are beautiful plants with extremely useful yet hidden properties. Explorers who have lost their way in the rain forest may like to look at a Traveler’s Palm and think of the spreading fan shape saying, “West is this way.” I like to think of the branches as forming an arrow pointing inward and saying, “Interesting things inside.”

Note: This is an updated version of an article that originally appeared on Interesting Thing of the Day on April 13, 2003, and again in a slightly revised form on July 11, 2004.