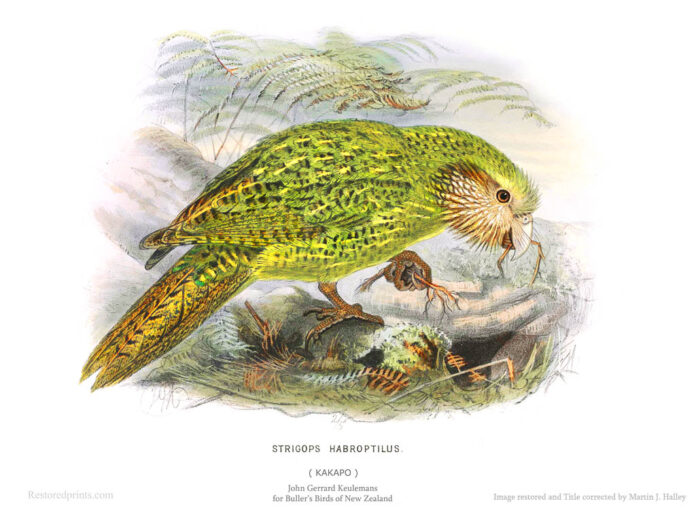 I’ve always been a sucker for endangered species—especially cute and comical endangered species. There aren’t that many of them—at least not anymore. But you’ve got to feel for an animal that spent many happy millennia peacefully minding its own business until humans came along. In this case, we’re talking about a silly-looking bird that had the misfortune of evolving in such a safe area that it lost (or never developed) most of the traits that could have enabled it to defend itself. It’s called the kākāpō, and apart from being silly-looking and endangered, it’s unique in a long list of other ways.

Look, Down on the Ground! It’s a Bird…

A native of New Zealand, the kākāpō (Strigops habroptilus, or “owl-faced soft feathers”) is a type of parrot, but only distantly related to other parrots. As its scientific name suggests, it looks somewhat like an owl (albeit with green or yellow plumage) and has exceptionally soft feathers. For decades, the world’s kākāpō population has hovered near extinction, and that’s the only sort of hovering this flightless bird can manage. Besides having feathers that are poorly suited to flight, its bone and muscle structure have developed in such a way as to make flying infeasible. It’s also heavy for its size and wingspan; a full-grown kākāpō is about two feet (60cm) long and weighs up to 9 pounds (about 4kg). Nevertheless, kākāpōs are good climbers, and can use their wings as a sort of parachute, to help them glide safely to the ground.

The kākāpō’s list of unusual attributes goes on. For example, it’s mainly nocturnal; each night, it walks (or even runs) for great distances—sometimes several kilometers—in search of food, which it locates with its highly advanced sense of smell. But what’s particularly striking is how poorly adapted the bird is to deal with enemies. The kākāpō spends nearly all its time alone, gathering with other adults only to mate. It has a strong odor, usually described as “musty” but apparently pleasant to humans and similar to that of the freesia flower. The odor attracts dogs, cats, and other predators. But when a kākāpō senses danger, it doesn’t attempt to run or attack; instead, it simply holds perfectly still. Long ago, its feathers may have served as effective camouflage against certain kinds of predators, such as eagles, but now, this behavior merely makes it easier for almost any other animal to catch and kill it. And yet the kākāpō, when protected from predators, has been known to live as long as 60 years, making it one of the world’s longest-lived birds.

We Like the Birds with the Calls that Go Boom

Yet another unusual behavior—unique among parrots and rare in any bird—is the kākāpō’s mating system. The males go to a prominent location, such as a hilltop, and create a courtship area known as a lek—a group of bowl-like indentations dug into the ground, connected by a network of well-maintained tracks. When the males gather (the gathering is also known as a lek), they compete for the best spots, and then begin calling for the females.

Although kākāpōs have a wide variety of calls, the male mating call is quite unusual: he puffs up a thoracic air sac and emits a very loud, low booming sound that vaguely resembles that of timpani. The sound can be heard for several kilometers, and the males continue their booming all night, every night, for as long as several months. At the same time, the males spread their wings and do a sort of hopping dance. When females show up, they pick out the best boomers for a one-night stand; the males continue their call and display for the remainder of the mating season, hoping to get lucky again. (Males don’t bond with particular females or participate in the raising of young.)

All this goes on, at most, once a year—sometimes as infrequently as every four years—further limiting the rate at which the kākāpō population can replenish itself. The frequency appears to be tied to the availability of food; greater resources encourage more mating.

To the Brink and Back

At one time, the kākāpō population may have reached hundreds of thousands or even millions, all across New Zealand. By 1995, that number had dropped to just 50. Problems first arose when the first human settlers—Māori from Polynesia—arrived around a thousand years ago. Although the Māori killed some kākāpōs for their food and their skins, a more serious problem was posed by the kiore, or Polynesian Rat they brought with them: it fed on both the kākāpō eggs and their young. In the 1840s, an even bigger problem arose. European settlers posed a triple threat: they destroyed much of the kākāpō habitat, hunted them for meat (and captured many more for museums and zoos), and brought still more animals that preyed on the birds. Within a few decades, the kākāpō population was severely depleted and the first conservation attempts were made—though they did little good.

New Zealand’s Department of Conservation initiated a Kākāpō Recovery Plan in 1989. All surviving kākāpōs have been relocated to two small, predator-free islands, and are monitored closely. Work is underway to encourage breeding, protect the birds’ habitat, ensure adequate food supplies, and safeguard the health of the surviving population. So far, the program has enjoyed significant success: as of 2018, the population has increased to 149. They’re still a long way from being self-sustaining, and some people fear that the gene pool is now too small to keep the species viable. But there is at least reason for optimism. Even without flight, the kākāpō may yet rise again.

Note: This is an updated version of an article that originally appeared on Interesting Thing of the Day on July 7, 2006.