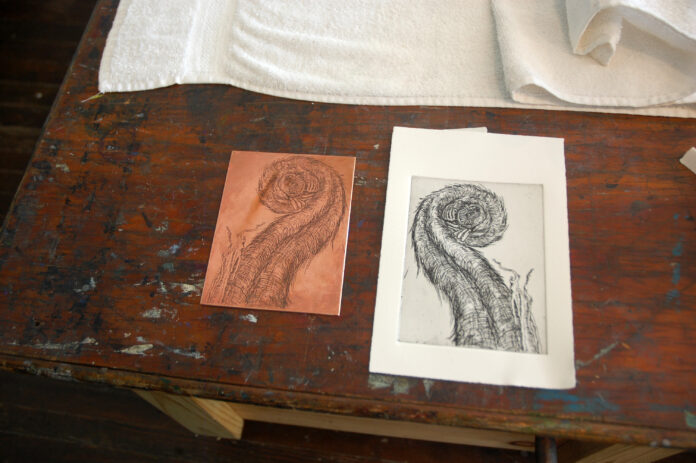 As I look around at the many printed items within arm’s reach—books, magazines, a calendar, posters, checks, labels, boxes, and so on—I am vaguely aware that nearly all of them made their way through a printing press at some point. And, since I’ve used rubber stamps and stencils, I have an equally vague awareness that any printing process is based on putting ink or other coloring onto some parts of paper while keeping it off other parts. But despite having worked in the prepress field for a while, I never thought very deeply about the methods for transferring ink to paper; terms like “offset” and “lithography” had no specific meaning to me. Even after I finally grasped how laser printers work, ink-based printing methods remained a mystery.

Every time I realize that I’ve been living in blissful ignorance about something so common, I feel sort of guilty—it’s the same feeling I had when I was in high school and knew that I’d studied just enough to get through my exams, but not enough to actually understand or remember anything. So I began some remedial self-instruction in printing techniques, determined to fill in those embarrassing gaps in my knowledge. Along the way, I learned all sorts of interesting things, but one printing method particularly struck my fancy: intaglio (in-TAL-yo) printing.

There are several major large-scale printing methods. The original printing press and its descendants (including rubber stamps) use raised letters to ensure that ink is applied only to the desired portions of the page; although an entire block of type may be covered with ink, only the raised parts make contact with the paper. In lithography, a printing plate (or stone) is moistened with water and then coated with ink; the greasy ink adheres only to the portions of the plate with the right texture (achieved in a variety of ways), while the water on the blank portions of the plate repels the ink. Although paper is brought into contact with the entire plate (directly, or, in offset lithography, via an intermediate rubber roller), only the inked portions transfer marks to the paper.

Intaglio printing (from an Italian word meaning “carve”) predates lithography by more than three centuries. Like lithography, it employs full-plate contact—but instead of relying on water to keep ink where it belongs, it uses recesses cut, engraved, or etched into a metal plate (or cylinder) to hold the ink. After the ink is spread, the plate is wiped down to remove excess ink from the top surface. The paper is then applied under tremendous pressure to push it into the grooves, transferring the ink where it has made contact. One of the side effects of intaglio printing is that the inked surfaces are very slightly raised on the front and indented on the back; depending on the type of paper and ink used, this can give intaglio prints a unique texture. A variant of intaglio printing called gravure varies the depth of the recesses in order to produce a range of tones; deeper grooves hold more ink and therefore create darker colors.

Show Me the Money

Intaglio presses can cost ten times as much as offset presses, and an intaglio printing plate can cost hundreds of times more than a comparable plate intended for offset printing; hence the relative popularity of the latter. But intaglio printing has some important advantages. For one thing, the plates have an incredibly long life; many millions of impressions can be made before the image quality degrades. For another, intaglio printing can achieve remarkably fine levels of detail. These facts, combined with the raised surfaces of the design, make intaglio printing the natural choice for currency, passports, and other high-security documents. Virtually every banknote in the world is printed at least partially using intaglio, because its distinctive appearance and texture make it easier to spot counterfeits. Although intaglio will never replace laser and inkjet printers on the desktop, there’s no better printing technique when only perfection is good enough.

Note: This is an updated version of an article that originally appeared on Interesting Thing of the Day on December 11, 2004.