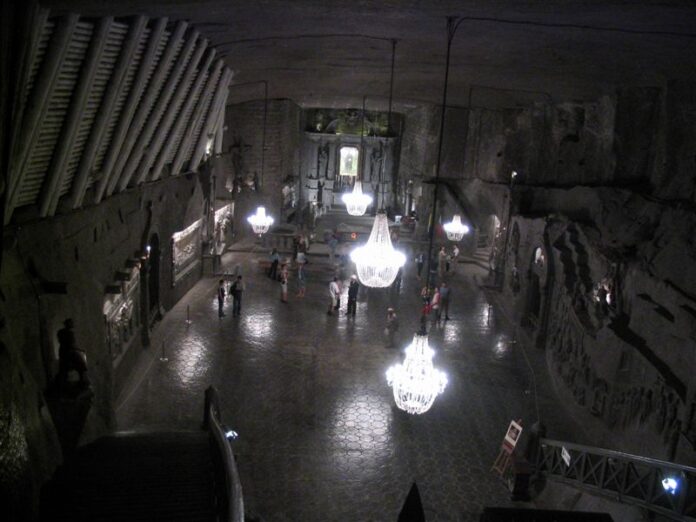 Shortly after our article about Salzbergwerk Berchtesgaden was published in 2004, I received an email from a reader who wanted to know if I’d heard of an even more interesting salt mine in Poland called Wieliczka. Although I always enjoy receiving suggestions for new topics, I wondered, briefly, just how many salt mines I could reasonably feature on Interesting Thing of the Day. But after researching Wieliczka a bit, I discovered the answer: at least two. This was simply way too impressive to pass up.

Located about 10 miles (14km) from Kraków, Wieliczka was in continuous operation from at least the 13th century until 2007, with its first known historical mention dating back to 1044. Over so many centuries, a truly staggering quantity of salt has been removed from this underground mine, with plenty more still left in the deposit. The mine occupies nine levels, with a maximum depth of over 1,000 feet (about 325m) and over 180 miles (about 300km) of passages. But instead of simply abandoning all the vast empty spaces formerly filled with salt, miners over the centuries transformed them into magnificent, ornate chambers—which together form a massive complex that has been likened to an underground city.

Wieliczka’s amazing transformation began in 1689. Because it was so inconvenient and time-consuming for the miners to get to and from their place of work, the mine arranged for Catholic services to be held daily inside the mine. In an effort to make the bare chambers feel more church-like, the miners began to carve statues out of rock salt. This led to murals, bas-relief carvings, and other decorative work, until eventually entire chapels were created—with floor tiles, ceilings, walls, altars, and even chandeliers carved entirely from pure salt. The chapels were soon joined by dining rooms, ballrooms, and thousands of other rooms, complementing underground lakes and other natural formations.

Pouring Salt in the Wound

Wieliczka attracted a certain number of tourists even in its earliest days. As the grandeur and scale of its carved rooms and artwork increased, it became a favorite destination for the rich and famous, a trend that has continued to this day. However, many people visit the mine not merely to look, but for health reasons. An underground health clinic, which has operated off and on since the early 1800s, provides treatment for people with respiratory ailments, allergies, and skin diseases; at one time, soaking in the mine’s brine pools was also considered therapeutic for a wide variety of other ailments.

In 1978, the mine was among the first sites added to UNESCO’s World List of Cultural and Natural Heritage. Wieliczka is now one of Poland’s top tourist attractions, with nearly a million visitors per year. Besides touring the mine’s most popular chambers (including a museum, gift shops, a restaurant, and a post office), visitors attend concerts, sporting events, church services, and even weddings inside the Wieliczka mine.

But all this attention has also led to considerable damage. Moisture from ventilation systems, visitors’ breath, and natural sources has dissolved some of the salt artwork; recent improvements in dehumidification have greatly slowed the decay. However, there is apparently no stopping tourists from licking the walls (a temptation that, I must point out, would never occur to me)—and salt is fragile enough that the mere contact of hands and feet causes it to erode much more quickly than stone. On the other hand, given the number of paying visitors each year, I imagine that tourism has become considerably more profitable for the mine than the salt itself was—reason for a degree of tolerance, even if the mine does occasionally take a licking.

Note: This is an updated version of an article that originally appeared on Interesting Thing of the Day on December 3, 2004.