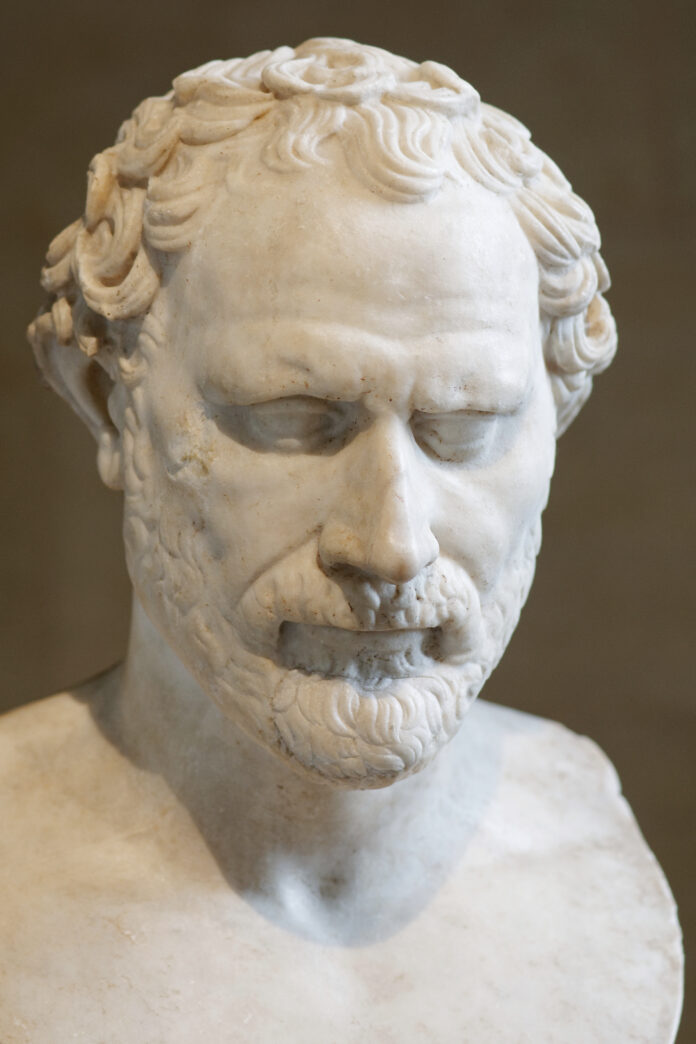 It’s a good thing I had never heard of Demosthenes when I was a child. I would have gotten in trouble. My mom would have said, “Don’t talk with your mouth full.” And I would have replied, “Don’t you want me to be a famous orator like Demosthenes? I’m training!” And then I would have been sent to my room without any more of whatever my mouth was full of. Kids, this is why grownups are always saying things like, “You’re too young to understand. Just take my word for it.” It’s for your own good. And if you get in trouble for talking with your mouth full, don’t say I didn’t warn you.

Even as an adult, I get in trouble over Demosthenes. One evening Morgen and I were watching My Fair Lady on TV. For those unfamiliar with the story, a linguistics professor in London named Henry Higgins makes a wager with a friend that he can rid a working-class girl, Eliza Doolittle, of her Cockney accent and teach her to speak like a proper lady. In one of his many drills, he insists that Eliza fill her mouth with marbles and then read a series of phrases. So of course I said, “Oh, just like Demosthenes.” Morgen gave me one of her patented looks that means “How do you expect me to know these obscure facts if I don’t read about them on Interesting Thing of the Day?” I was tempted to respond with a look that meant “Oh come on, everybody knows about Demosthenes,” but I opted instead for the path of marital concord. After all, one shouldn’t look a gift topic in the mouth.

Appropriately enough, Demosthenes had a name that, for many English-speaking people, is a tongue twister. I have always pronounced it “di MAHS thə neez,” which is what my trusty dictionary says. However, no less an authority than Demosthenes Spiropoulos, proprietor of the website WorldOfDemosthenes.com, says his name is pronounced Dee-moss-sta-knees. So take your pick; I suppose it depends on how authentically Greek you want to sound (which, in my case, is not at all).

The story is this. Demosthenes lived in Athens from 384 BCE to 322 BCE. As a young man, he suffered from a speech impediment—which may have been a stutter, an inability to pronounce the “r” sound, or both. He designed a series of exercises for himself to improve his speech. According to legend, he practiced speaking with stones in his mouth, which forced him to work very hard to get the sounds out. When his diction became clearer, he got rid of the stones and found he was able to enunciate much more effectively than before. He also practiced reciting speeches while running and speaking over the roar of ocean waves to improve his projection. These strategies must have worked, because Demosthenes achieved fame as the greatest orator in ancient Greece. He is best known for his passionate speeches urging the Greek citizens to defend themselves against invading Macedonian king Philip II.

Naturally this story is repeated often with a moral of “work hard, be persistent, and you will succeed.” Alas for Demosthenes, historical acclaim is all he got for his efforts. His speeches, though popular and well-received, did not prevent Greece’s conquest by Macedonia. Shortly thereafter, Demosthenes was falsely accused of taking a bribe and sent to prison. He escaped, but remained in exile until Alexander the Great died. Demosthenes then returned to Athens and once more tried to lead a popular uprising. He failed again, but not without attracting the attention of the authorities. When he learned that he faced imminent capture and possibly death, he committed suicide by taking poison he had long kept hidden in a pen. Tragic though his end was, the story of Demosthenes’ dramatic forensic achievements continues to inspire speakers to this day.

Note: This is an updated version of an article that originally appeared on Interesting Thing of the Day on October 6, 2003, and again in a slightly revised form on September 26, 2004.