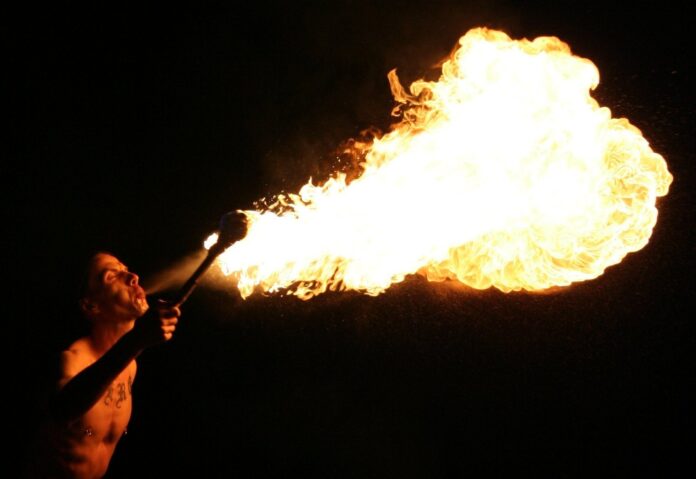 As is clear from the many email messages I receive, readers of Interesting Thing of the Day are, on the whole, intelligent, educated, and clear-thinking individuals. You are not prone to careless or reckless behavior, and you have more than a fair measure of common sense. So I felt it unnecessary to point out, for example, when writing about coffee, that it is a hot beverage that could burn you if you are not careful. I did not have to mention that if you enter a wife carrying contest you should lift with your legs, not with your back. And I felt no need to caution you against saying “My, how lovely you look today” when speaking Klingon. You are smart enough to figure all these things out on your own.

And yet, after reading many websites about fire breathing—each of which begins with a stern warning and disclaimer—I feel strangely compelled to point out that actually attempting to breathe fire is an incredibly bad idea. However impressive it may appear, and however many circus performers may have done it all their lives, I must urge you in the strongest possible terms to resist any temptation to bring fire, or indeed flammable substances generally, into proximity with your mouth. If you fail to heed this warning and in so doing suffer disfiguring burns, cancer, loss of important body parts, or death, well, don’t say I didn’t warn you.

A Breath of Fresh Fuel

Fire breathing is just one of several terms for a stunt most of us have seen at one time or another. A performer puts a small amount of fuel in their mouth and, after a deep breath, sprays it forcefully past a torch that’s held in front of their face. The flame ignites the fuel into a huge, bright, and noisy ball of fire that vanishes almost instantly. This is not to be confused with fire eating, an altogether tamer practice (though nevertheless still dangerous and not recommended) in which the performer places a flaming torch in their mouth, thus (usually) extinguishing it.

I’d always had the idea that fire breathers used lighter fluid or gasoline, but as every source I consulted on the subject pointed out, these are among the worst possible choices (along with alcohol). Fuels such as these have a low flash point and easily ignitable vapors; these are both dangerous attributes that make an already risky activity downright foolhardy. (They also, reportedly, taste terrible.) A better choice is kerosene, a petroleum-based liquid that’s known in most parts of the world as paraffin and sometimes used as fuel for lamps and lanterns. Kerosene not only has a higher flash point than gasoline but is reputedly less carcinogenic (for what little that’s worth). But because it does not burn quite as readily, it must be atomized—turned into a really fine mist, with no large droplets—and performers apparently must practice for quite some time to develop just the right kind of spray.

One thing fire breathers take care to avoid is a steady stream of liquid exiting the mouth, because the fire could travel back on the stream and into the performer’s mouth or even lungs—a decidedly unhappy event. Fire breathers tend to avoid long hair (including facial hair), which can burn easily, as well as clothing made of synthetic fabric, which has the nasty tendency to melt into one’s skin when burned. They also, as a rule, have safety equipment nearby (such as a wet blanket, fire extinguisher, and first aid kit), as well as an assistant trained to deal with emergencies. But even with care, an unexpected gust of wind, a hiccup, or any number of other random mishaps can (and sometimes does) result in serious injury. And, of course, anything flammable enough to burn so spectacularly can also do spectacular damage to your mouth, teeth, and digestive system. As a result, many fire breathers have seen their health and careers go up in flames (as it were).

Why do so many jugglers and street performers include such a dangerous procedure in their acts? Probably for the same reasons people go over waterfalls in barrels, walk across tightropes, or do other “daredevil” stunts—these things are crowd pleasers, they produce an enormous feeling of achievement, and can make the performers look incredibly appealing (assuming they survive). Fire-breathing can also, of course, result in higher-paying gigs (or more generous donations) than an act would produce otherwise.

I have never tried fire breathing and have no intention of doing so. Once, however, when I was a kid, a friend of mine held a lighter in front of an aerosol can of WD-40, creating a similar effect. (This, too, I must emphasize, is something you should never, ever do.) It was impressive, sure, but it also scared the living daylights out of me. If I want to live dangerously, I’ll go drink from a glacier. Once again, that’s something you definitely should not try at home.

Note: This is an updated version of an article that originally appeared on Interesting Thing of the Day on April 7, 2005.