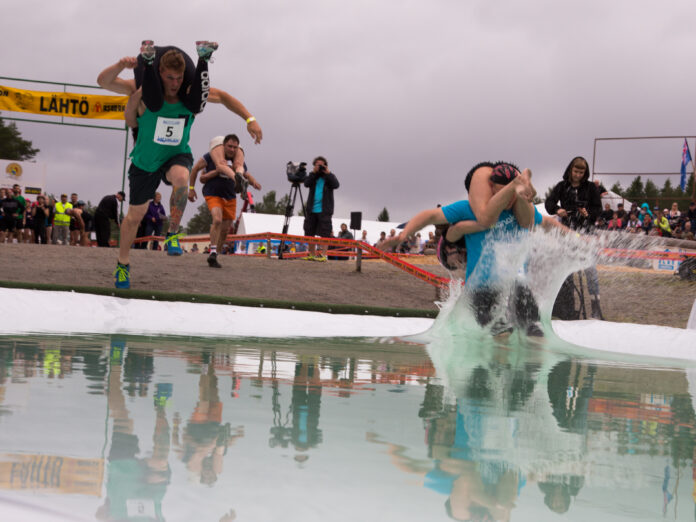 I have never been much of a sports fan, which explains the scarcity of articles here dealing with sports-related topics. Truth be told, I’ve always had a hard time generating enthusiasm for any sort of game, whether as a participant or a spectator. There are a few notable exceptions: I can get quite worked up about Scrabble or beach volleyball, for example, not that I’m terribly skilled at either. Although I have the utmost respect for athletic ability, I do not myself possess any, and I don’t generally find it very interesting to watch other people competing.

But then, perhaps I just need to broaden my horizons. There is a whole class of sports that will never have a national league or Olympic status, but that have enough pure entertainment value to appeal to even a wet blanket such as myself. One such sport, which now includes fierce international championships, is the Wife Carrying Contest. Strange but true: this is an actual sporting event with participants every bit as serious and competitive as those who run marathons or, say…break hot dog-eating records.

Strong to the Finnish

The world capital of wife carrying (a dubious distinction, I must imagine) is Sonkajärvi, Finland. The first national championship was held there in 1992, and this small town has hosted the event every summer since—with international participation beginning in the late 1990s. (The North American championships, by the way, are held in Newry, Maine.) The basic idea of the contest is that a man carries a woman (usually on his back or shoulders) along a 253.5-meter sand-covered track, with two dry barriers and one water barrier. The woman need not be his wife—she can be someone else’s wife, or even a bachelorette. The only stipulation is that she be at least 17 years of age and weigh at least 49 kilograms (about 110 pounds)—or be weighed down with a rucksack to reach that total figure. (Prior to the introduction of the minimum weight, some men chose exceptionally petite partners and were therefore considered to have an unfair advantage.) The woman is required to wear a helmet in case she is dropped—an error which, apart from any injuries it may cause, results in no small embarrassment to the male competitor.

Although the sport as such is relatively new, organizers claim that it’s based on a tradition that stretches back to the late 1800s. Every description of the sport’s origin mentions two facts, which may or may not be apocryphal and may or may not have anything to do with each other. First, there was supposedly a bandit named Herkko Rosvo-Ronkainen who required wannabe henchmen to carry a large, heavy sack across a makeshift obstacle course including a fence and a ditch in order to prove their worthiness. And second, legend has it that in those days, it was common for men to steal women from neighboring villages. Some accounts conflate these two stories to describe Rosvo-Ronkainen as the leader of a wife-stealing gang. Whether or not any of this is true, the practice of wife carrying seems to have taken a century-long hiatus before reemerging as a spectator sport.

Wife carrying, as originally conceived, was apparently its own reward, but these days the women are not the prize. Instead, the winning team gets a small amount of cash, some gadgets donated by sponsoring companies, and the woman’s weight in beer. No kidding.

Estonia dominated the championships from 1998 to 2008, after which Finland won eight of the next ten years (and a particular Finnish couple, Taisto Miettinen and Kristiina Haapanen, won six of those years). The 2018 champions were, for the first time, from Lithuania.

To my knowledge, no same-sex couples have yet challenged the seemingly sexist nature of the contest. I feel certain that the enlightened Finns would be happy to let a man carry another man or a woman carry another woman, but given the average sizes of men and women, the odds would tend to favor a man carrying a woman. Photos I’ve seen of various competitors usually show a rather burly man and a rather slight woman. Morgen and I are too similar in size to pose any threat to the reigning champs, but I’ll bet I could carry a hot dog and a Coke from the concession stand to our seat as quickly as the next guy.

Note: This is an updated version of an article that originally appeared on Interesting Thing of the Day on November 17, 2004.