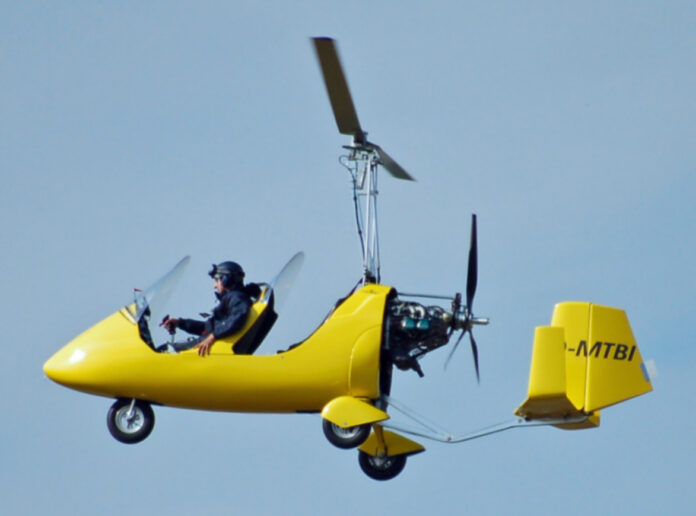 Image credit: By Frank Schwichtenberg [GFDL or CC BY 3.0], from Wikimedia Commons

These days, it seems like everyone’s trying to build a flying car (or taxi)—which usually means a design with four or more small, computer-controlled rotors, much like the drones you can buy for aerial photography. But there’s a much simpler, safer, and lower-tech design for a small aircraft. It sounds like a joke: What do you get if you cross an airplane and a helicopter? But the answer isn’t “aircopter” or “heliplane,” it’s “autogyro”—or, sometimes, “gyroplane.” This peculiar type of aircraft, which was the forerunner of the modern helicopter, was once extremely well known. Although it never caught on as a widespread commercial design, the autogyro is beginning to make a comeback, especially among hobbyists and amateur aviators.

First, a word or two of aeronautical review. A conventional, fixed-wing airplane gets thrust from propellers or jet engines and lift from the wings, but that lift can only be generated when the wing is moving fast enough (and, of course, in the right direction). When an airplane is moving too slowly for its wings to provide adequate lift to keep it airborne, it is said to stall, which is perfectly fine if you happen to be landing the plane, but not so good otherwise. Helicopters, on the other hand, get both thrust and lift from one or more narrow, propeller-like rotors turned by an engine. Rotor blades are thus essentially moving wings. The speed and direction of the craft’s movement are determined by the angle at which the rotor is positioned; in most helicopter designs, a vertically mounted tail rotor counteracts the main rotor’s rotation and prevents the helicopter’s body from spinning.

An autogyro has a rotor much like that of a helicopter, with one crucial difference: it is unpowered. A propeller provides thrust, just as on an airplane, while the lift comes from the spinning blades of the rotor. But wait a minute—didn’t I just say that the rotor is unpowered? That’s where the “auto” part comes in. The rotor must spin to provide lift, but that spin comes from the forward motion of the entire craft.

If that sounds confusing, think about maple (or elm or ash) trees. The seeds are encased in little winglike structures that twirl as they fall to the ground. Those casings are called samaras (though, in the case of maples, some botanists refer to them as schizocarps because they form in pairs that split apart). Because of the samara’s unique shape and balance, the force of the air blowing past it as it falls to the ground causes it to spin; that spinning is known as autorotation. And if you could somehow put a very tiny engine and propeller on a samara to give it some forward momentum, that would generate enough air movement to keep it spinning—and in turn, keep the whole thing aloft. That (on a somewhat larger scale) is how an autogyro works. Because the rotor is not spinning under its own power, there’s no need for a tail rotor—the craft itself can’t spin.

Autogyros tend to look rather goofy: either like airplanes with a giant rotor where wings should be, or like stunted helicopters missing their tails. They generally can’t fly as fast or as far as fixed-wing airplanes, and they can’t hover or maneuver like helicopters. (Some designs, however, do provide power to the rotor temporarily to facilitate a vertical or near-vertical takeoff and landing.) If those trade-offs sound like the worst of both worlds, though, consider that unlike airplanes, autogyros are virtually stall-proof, no matter how slow they’re going. If the engine gave out, the rotor would keep spinning, and the craft—if controlled carefully by the pilot—could simply float to the ground. All this does not necessarily mean that autogyros are safer than other aircraft; numerous other considerations come into play. But in certain circumstances, with proper design and a well-trained operator, they can sometimes be safer.

A Spanish engineer named Juan de la Cierva developed a hinged rotor design in early years of the 20th century that would serve as the basis for all future rotary wing aircraft. Cierva built his first stable autogyro in 1923. After a long series of improvements, he began to license his design to aircraft manufacturers in other countries, including the United States. Legendary pilot Amelia Earhart was quite fond of autogyros. In 1931, she set a record for highest altitude in an autogyro—18,415 feet (about 5,600 m); later that year, she was also the first person to fly an autogyro from coast to coast in the United States. Autogyros were used for rooftop-to-rooftop urban mail delivery, and a few autogyros were even put to military use during World War II. But despite these scattered successes, the autogyro concept basically fizzled out by the mid-1940s, having been supplanted by fixed-wing airplanes for some applications, and helicopters for others. Cierva, ironically, died in 1936 in a plane crash.

In recent years, however, small, kit-built aircraft of all kinds have increased in popularity—everything from ultralights to gliders to biplanes to mini-helicopters. And along with this trend has come a renewed interest in autogyros: they’re less complex to build and operate than helicopters, and require a lot less runway space than fixed-wing airplanes. Autogyros are also being used increasingly in law enforcement, nature observation, sightseeing, and other recreational flying. A one-person autogyro will still cost you more than most cars, but at least it’s guaranteed not to stall.

Note: This is an updated version of an article that originally appeared on Interesting Thing of the Day on May 10, 2005.