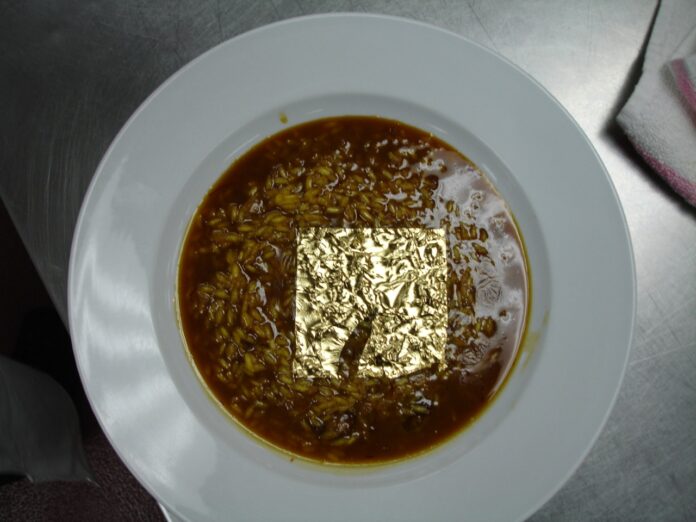 I like to think of myself as an open-minded person, someone who is tolerant of those with different beliefs, however wacky they may seem to me. Every rule has its exceptions, though. Years ago while traveling in England, I met a woman who claimed her diet consisted solely of durian, the smelly tropical fruit that looks like a medieval weapon. That was weird, but I was prepared to overlook it; I’ve heard of stranger things. During the course of our discussion about food, however, the woman asked if I’d heard of edible gold. I cheerfully replied that I had, which was true—I’d seen a TV show years earlier about chefs using gold leaf as a decorative but edible garnish on dishes in upscale restaurants. I assumed that’s what she was talking about. But she seemed very surprised that I should know about this, and in a hushed, conspiratorial tone, began excitedly talking about how the ancient Egyptians had discovered that by eating powdered gold, one could become immortal. Very clearly, she believed this too. O…K. Right then and there, all my good intentions of open-mindedness went out the window—that was just way too strange for me to get my brain around.

Later, when I consulted a search engine to see if I could learn any more about this seemingly outrageous claim, I was shocked and dismayed to find there are tens of thousands of webpages describing, with great seriousness and credulity, a miraculous substance usually referred to as white powder (or powdered) gold. I spent the better part of an afternoon trying to sort out all the bizarre and competing claims about this stuff—a futile exercise that left me scratching my head. While I can’t claim the slightest expertise in this, ahem, esoteric field, I thought I’d make an attempt to distill, in my alchemical way, the essence of some of these claims for your consideration.

Let’s begin on some solid footing: culinary gold. You can easily find, often for less than US$10, a box of gold leaf (sheets, flakes, or sprinkles) manufactured expressly to enable you to impress your friends at your next dinner party. These unbelievably thin pieces of nearly pure gold add an impressive touch to chocolates, soups, sushi, and just about anything else you can think of. Because the quantity of gold is so small, the price is not unreasonable; yet these gold highlights make a meal appear to be extravagant and give restaurants an excuse to charge exorbitant prices. And yes: it’s safe to eat (if not particularly flavorful). Metallic gold is biologically inert; that’s why dentists can use it for fillings, caps, and crowns. (Gold salts, on the other hand, such as auric chloride, can have toxic effects over time.)

Some purveyors of herbs and mineral supplements sell a gold colloid: that is, a suspension of extremely tiny particles of metallic gold in water or another liquid—or solid pills made from such a suspension. In a gold colloid, each particle contains (according to one source, at least) a mere nine atoms or so of gold. A daily dose of colloidal gold ranging from a few drops to a few teaspoonfuls is supposedly enough to provide a wide range of health benefits. Here, at least, there is a wee bit of scientific support. A few studies performed at the behest (and expense) of a gold colloid manufacturer found their product to be effective in managing rheumatoid arthritis and also, intriguingly, increasing I.Q. scores in their test subjects. I’d have greater confidence in independent testing, but the claims are at least plausible.

Our next step, however, is one decidedly outside the realm of scientific certainty. David Radius Hudson, a farmer living in Arizona, was trying to extract gold and silver from the tailings of an abandoned mine in the mid-1970s. In the process, he found a mysterious substance that defied analysis, despite years of experimentation by reputable laboratories, undertaken at great personal expense. Here the details get very fuzzy, but it seems that Hudson eventually concluded the white powder he’d found was gold in a monatomic (or, as he called it, monoatomic) state, in which each atom was physically separate from all others, rather than being joined in molecular groups as is more common. (There are some good reasons to doubt that Hudson’s gold truly was monatomic, but that’s neither here nor there.) He also, somehow, developed a process for creating (or separating) this special form of gold from ordinary metallic gold—though how he managed to figure this out without any scientific training is unclear.

In any case, this white powder gold, according to Hudson, has some rather amazing properties: it is allegedly a high-temperature superconductor and, when heated in just the right way, weighs less than nothing—it can levitate. And, of course, it has a long list of incredible health benefits. Hudson received patents in Britain and Australia (though not, interestingly, in the U.S.) for this special form of gold and 10 other elements, which he referred to collectively as Orbitally Rearranged Monoatomic Elements (ORMEs). (I should interject that the awarding of a patent does not mean that a government agency has successfully reproduced the invention in question, or even that they have validated it as being scientifically sound.)

Then Hudson began reading about alchemy, and he became convinced that his white powder gold was the stuff of legend—well, many legends, in fact. He equated it with “manna,” “the philosopher’s stone,” “the food of the gods,” and “the elixir of life,” among other things. Hudson believed he had rediscovered an ancient alchemical formula. He began promoting this belief in New Age and mystical circles, which eagerly latched onto it and have been proclaiming it as truth ever since. And, naturally, numerous companies sell solid or liquid forms of “white powder gold” supposedly created using variants of Hudson’s recipe.

Needless to say, consumers have to take the composition of this substance on faith. Maybe it really is monatomic gold, maybe not. But if it is, so what? That doesn’t make it magical…and it certainly doesn’t make it the philosopher’s stone. You’d think claims of room-temperature superconductivity could be tested readily enough, and that if true, they would be headline news. You’d think a substance that possesses anti-gravity capabilities would attract some scientific attention. And you’d think that if this substance had any meaningful health benefits—let alone the promise of an indefinite lifespan—researchers would be tripping over themselves trying to demonstrate this in objective studies, the better to sell more of the stuff and benefit all of humanity. Curiously, none of this appears to be the case. Hudson himself, meanwhile, has reportedly halted his research, partly due to heart disease—an ailment apparently beyond the healing capabilities of his magical elixir—and partly due financial troubles as the result of actions by the U.S. Environmental Protection Agency that he considered harassment.

Whatever else can be said about white powder gold, I can testify that it has the magical power to give me a headache—merely by reading about it.

Note: This is an updated version of an article that originally appeared on Interesting Thing of the Day on March 3, 2005.