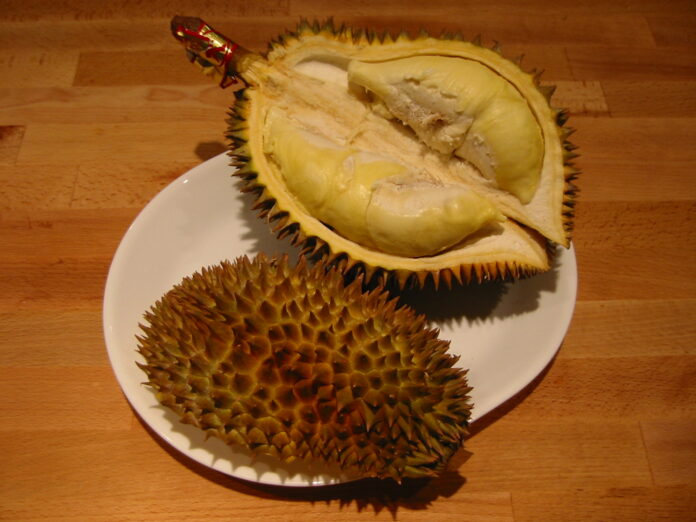 The first time I heard of unusual tropical fruit called durian was when I was 19, and I spent the summer in Indonesia. Prior to that time, my experience with tropical fruits was limited to relatively familiar ones such as pineapple, banana, mango, and papaya. But durian, which is sometimes called “the king of fruits,” was definitely something different. A missionary told me they have a saying about the fruit: “smells like hell, tastes like heaven.” Whatever else could be said about it, it seemed to provoke very strong reactions from people—either they loved it or they hated it. Unfortunately, durian was out of season at the time, so I didn’t have any.

Keep Out of Reach of Children

Many years later, however, when living in San Francisco, I kept hearing about durian. So I decided that in the noble pursuit of interesting things, it was time to track some down, and I and headed to Chinatown. I had read that the fruit’s growing season ran from roughly March through May, and since it was late May at the time, I figured I just might get lucky and find some fresh durian in one of the many produce markets there. It took about half a dozen tries, but I did eventually find a market with a large bin of durian. I selected the smallest one—which was still about the size of a small watermelon—and took it to the counter. The cost for a 5-lb. (2kg) durian: a whopping US$20. But no matter: I was on a quest. The fruit was greenish-brown and covered with sharp, hard spikes. It looked very much like a mace, and could no doubt be used as one. The sharp spikes, along with the sharp odor, are no doubt nature’s way of saying “stay away,” but sometimes such warnings must be ignored in the pursuit of culinary adventure.

I put the durian—which was sealed securely in a plastic bag—in the car while I did some other shopping. Returning less than an hour later, a strong, pungent odor filled the whole car. I rolled down all the windows and drove around for an hour—the car still smelled. I took the durian home, hermetically sealed it in three layers of plastic bags, and went out again. After another hour I returned, opened the door, and immediately confronted the same strong smell. It’s a vaguely fruity smell, in the way that apples rotting in a manure pile smell vaguely fruity. It’s hard to say quite what it smells like, but it is unlikely to become an air freshener or cologne scent. And the scent is very tenacious—plastic won’t stop it, it sticks to everything, and it dissipates very, very slowly.

Well, smell or no smell, I had to find out what fresh durian tasted like. I sliced it open and found several pulpy masses inside, and at the center of each one, a hard pit. I cut a small piece of the edible flesh for myself and one for my wife, who bravely volunteered to assist in the experiment. The smell, of course, was worse on the inside than on the outside, and just as the fruit was about to touch my lips (that is, coming in very close proximity to my nose) I nearly lost the will to eat it. At such close range the smell is very, very off-putting—almost oniony, which is not what you expect from a fruit. We ate. After the first bite, Morgen said, “Wow, that’s so delicious!” And I was thinking: “Wow, that’s slightly more edible than I had imagined.” The texture is very soft and creamy, almost like an avocado, but slightly fibrous. The flavor is rather hard to pin down; Morgen said it reminded her a bit of a piña colada—a sort of mishmash of tropical flavors. But with each successive bite, we both found the experience less and less satisfying. The oniony smell also translated into an acidic, oniony aftertaste. After just a few bites, we agreed that the experiment had been completed, and we hustled the remains of the fruit out of the house.

Years later we visited Indonesia together (my second time; her first), and as luck (or misfortune) would have it, durian was in season. We tried it again, and our opinions matched our initial impressions—Morgen still thought it was delicious, and I still thought that I’d be happier eating pineapple, jackfruit, or perhaps dirt.

Durian is grown in Southeast Asia and several other tropical regions and exported—either fresh or frozen—anywhere there’s a market for it, which is to say, anywhere there are masochists. I’m sure there must be people who genuinely enjoy the taste, but durian recipes are few and far between. From what I’ve read, it is actually very difficult to find durian at the precise peak of ripeness; supposedly, it’s overripe durian that gives the fruit its bad reputation, and only a trained professional—yes, there really are such people—can pick out a durian you’ll really love. I have yet to meet such a person, so for the time being I’ll continue regarding durian as a very useful tool for ridding yourself of an unwanted roommate or spouse, or perhaps defending your household against vampires or invading armies.

Note: This is an updated version of an article that originally appeared on Interesting Thing of the Day on May 26, 2003, and again in a slightly revised form on March 1, 2005.