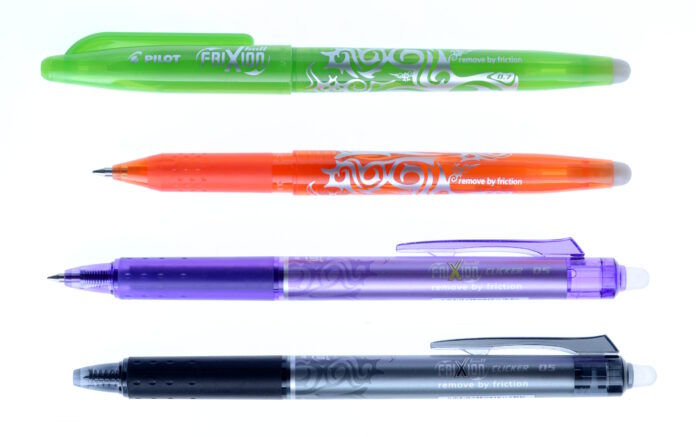 Image credit: By Simon A. Eugster [GFDL or CC BY-SA 3.0], from Wikimedia Commons

Among the things you may have learned about me if you’ve been reading Interesting Thing of the Day for a while are that my favorite color is purple; that I habitually wear a pen clipped to my collar; and that despite its other virtues, a purple Space Pen is insufficiently water- and smudge-proof for my needs. The purple pen currently clipped to my collar is a Pilot FriXion pen, and in case you’re unfamiliar with this marvel of technology, I’d like to say a few words about why it’s so cool.

Back in 1979 when I was in junior high (yes, I’m old), Paper Mate introduced the Erasermate erasable ballpoint pen. My classmates and I thought this was the Best Thing Ever, because we often had to write school assignments in ink, but correcting mistakes was either messy (using correction fluid) or ugly (crossing stuff out). Erasable pens solved those problems, and they were more pleasant to write with than pencils. But the ink did have quite a tendency to smudge, and there were many contexts in which the erasability was considered a fault rather than a virtue. (You wouldn’t, for example, sign a check or an official document with erasable ink.) So erasable pens gradually fell out of favor.

Several years ago, however, I encountered a completely different kind of erasable ink, and I’ve been a huge fan ever since. Pilot’s FriXion pens are gel ballpoints, and they write, look, and feel just like other gel pens. But FriXion ink has a special quality: it turns invisible when exposed to heat above about 140°F (60°C). That means you can erase a page (or an entire notebook) by popping it in the microwave for a few seconds, but there’s an easier way: use the plastic “eraser” on the end of the pen—rubbing it over the ink produces heat from friction (hence the name) that makes your writing disappear just as if you were using a regular eraser on pencil marks. (And in case you were wondering, yes, the ink reappears when exposed to cold temperatures—below 14°F [–10°C].) Mind you, this isn’t a rubber eraser, the kind that flakes off as you use it—it’s just an inert nub that creates friction. So you get none of the mess of earlier erasable pens.

FriXion pens come in numerous combinations of tip widths (0.38, 0.4, 0.5, and 0.7mm), colors (20 options), and form factors (retractable or with a removable cap, clip or not, metal or plastic, thin or thick, and so on). You can almost certainly find a combination that suits your tastes.

But wait, there’s more! I didn’t realize it until I started researching this article, but the FriXion brand also includes erasable markers, highlighters, colored pencils, and even stamps. The whole notion of an erasable highlighter makes my head spin (in a good way). (Unfortunately, if you’re highlighting something you’ve written with a FriXion pen, you won’t be able to erase one without the other.)

So, if (like me) if you’re one of those old-fashioned weirdos who still occasionally needs to use a writing implement to put marks directly on paper, I think you’ll find a FriXion pen to be an excellent tool for the job.