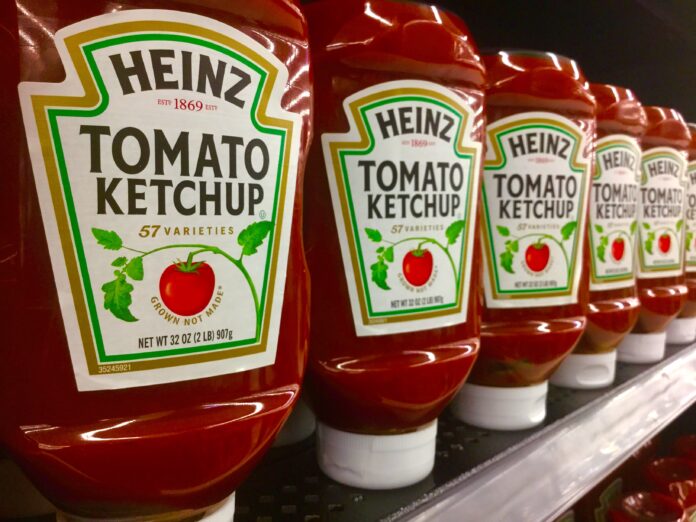 I can’t imagine a more quintessentially American meal than a burger and fries, and I can’t imagine a burger and fries without ketchup. Maybe that’s why I always thought of ketchup as the all-American condiment. Or maybe it was the fact that I grew up just a few miles away from Pittsburgh, Pennsylvania—home of the H.J. Heinz Company, a name synonymous with ketchup. (Heinz is not part of Kraft Heinz.) In any case, the first time I saw the word “ketjap” on the bottle of a watery, soy-based Indonesian condiment, I jumped to the reasonable if anglocentric conclusion that I was looking at a loanword—a word borrowed from English into Indonesian, perhaps by way of Dutch—which inevitably changed somewhat in meaning along the way.

It turns out I was half right: ketchup is a loanword, but not from English. And just as the name of this product has undergone countless changes in spelling, its composition has changed dramatically with time and geography.

You Say Tomato, I Say Ketchup

The first clue to the storied past of ketchup can be found in large, bold letters right on that Heinz bottle: it says “Tomato Ketchup.” Isn’t that redundant? Aren’t tomatoes always the key ingredient? Why call attention to the fact, as though we should expect to find Beet Ketchup and Cucumber Ketchup nearby on the shelf, and need to make sure we’re buying the right kind? But this raises the question of what “ketchup” means in the first place. Some historical perspective may be helpful.

Etymologically speaking, the English word ketchup, also spelled “catsup” and a dozen other ways, derives from the Malay (or Indonesian) word kecap (also spelled ketjap), which in turn was based on the Chinese word ke-tsiap. The Asian forerunner of ketchup was a type of fish sauce, which is to say fish (typically anchovies, and often fermented), dissolved in brine. When this sauce made its way to Europe in the 1600s, cooks began experimenting with different ingredients—besides anchovies, mushrooms, walnuts, oysters, and even lemons appeared in various ketchup recipes over the next couple of centuries. Salt was the only invariable ingredient; while some recipes included vinegar, few included sweeteners, and nearly all were quite runny. In the New World, tomatoes were known to be used in ketchup as early as the 1780s, though the first published recipe for tomato ketchup—created by James Mease, a physician and horticulturist from Philadelphia—dates only from 1812.

But it was not until 1872 that Henry J. Heinz developed the recipe the company still uses today. In contrast to conventional ketchup-making wisdom at the time, Heinz used ripe tomatoes, increased the proportion of vinegar in the recipe dramatically, added sugar, and flavored it with onion and a special blend of spices. The result was an extremely viscous condiment that included all the major taste components—salty, bitter, sweet, sour, and umami (or savory). This winning combination soon became the American definition of ketchup; although competitors’ recipes differ in the details, the public no longer accepts anything as “ketchup” that doesn’t fit the pattern of a thick, tangy, tomato-based sauce.

For more than a century, Heinz wisely followed a “don’t mess with success” policy; only bottle shapes and sizes changed significantly. Plastic squeeze bottles were perhaps the best thing to happen to ketchup since the tomato, and today’s upside-down “Easy Squeeze” bottles are even better. Of less certain distinction was the range of bright ketchup colors Heinz experimented with around the year 2000. First green ketchup appeared on the shelves, then purple (my personal favorite), and even, briefly, blue, pink, orange, and teal. While claiming the colors were “very popular with consumers,” the company nevertheless discontinued them after a short time. Although they tasted just like red ketchup, I suspect too many people found the notion of blue tomatoes cognitively dissonant. Or maybe it’s just that kids quickly tire of novelty.

For a brief period in 1981, the Reagan administration decreed that ketchup could be considered a vegetable for the purpose of satisfying nutritional requirements for school lunches. Because the government’s edict used the spelling “ketchup,” Del Monte found itself unable to sell its Catsup to schools, and quickly changed its spelling. Although public outcry soon resulted in ketchup’s removal from the vegetable list, Del Monte kept its new spelling. That appears to have settled the question of spelling once and for all, while leaving unresolved the puzzle of why ketchup wasn’t considered a fruit. But it could have been worse: if ketchup had maintained its original formula, it might now be considered a meat.

Note: This is an updated version of an article that originally appeared on Interesting Thing of the Day on December 1, 2004.