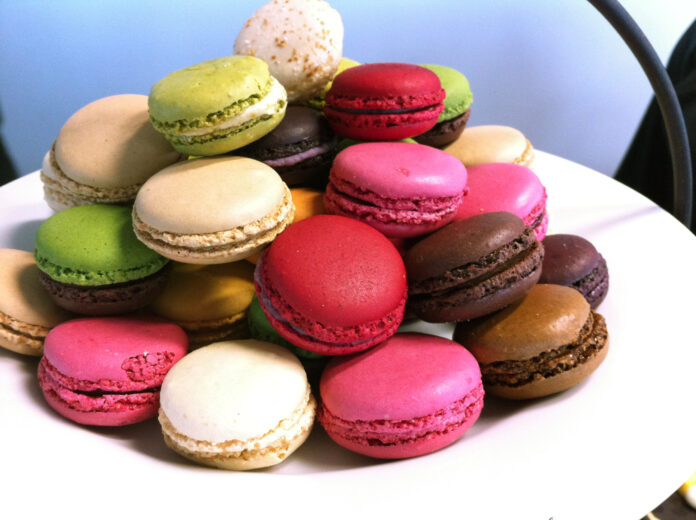 During the years I lived in France (2007–2012), I availed myself of the country’s plentiful and delicious baked goods at every opportunity. One of my favorite treats—which, at the time I moved to France, I’d never encountered in the United States—was a wonderful little cookie called a macaron. I sampled as many varieties as I could, and at one point even participated in a blind taste test of numerous macarons hosted by friends who now own two restaurants in Paris.

A macaron is a type of sandwich cookie. The top and bottom are made from a mixture of almond flour, meringue, and powdered sugar, usually with other flavors and/or colors. You bake these on a cookie sheet (being careful to make them perfectly round), so they’re flat on the inside surface, and curved (with a smooth, almost shiny finish) on the outer surface. Then you put a layer of ganache, jam, or some similarly viscous and sweet filling between two of these, and voilà! You have yourself a macaron.

Almost every French bakery that sells macarons offers them in several standard flavors, such as chocolate, coffee, pistachio, lemon, and vanilla. But I’ve seen dozens, maybe hundreds of different flavors (including contrasting cookie-and-filling combinations), often in unnaturally bright colors. A number of French bakery chains, most notably Ladurée, specialize in macarons. And, of course, they’ve now invaded North America, including the small local coffee shop I happen to be sitting in as I type these words. Alas, the quality and authenticity of macarons sold outside France varies tremendously.

In case you’ve never had a macaron—I mean a proper, fresh, French macaron—the most salient characteristic is the triple-layer texture. As you bite into a macaron, your teeth first penetrate a delicately crispy crust of the outer cookie, and then move into the light, moist, and slightly chewy cookie interior. Then you reach the filling, which may be creamy or fruity, but in any case has yet a third texture. Of course the flavors are important too, but if the textures aren’t right, you miss the whole experience. Made well, macarons are simply heavenly.

Now then…having informed you of the virtues of the macaron, I must address the matter of that other cookie.

As countless websites, tweets, and blog posts are at pains to point out, there’s a huge difference between the macaron (with one o) and the macaroon (with two). Macaroons—which have been a staple of American cookbooks for many decades—are composed mainly of shredded coconut (along with flour, sugar, and egg whites). And they’re fine if that’s what you’re in the mood for, but they are nothing at all like macarons.

Unfortunately, loads of people confuse the two. I’ve seen websites describing macarons while showing pictures of macaroons, and vice versa. And I’ve also seen lots of descriptions of one or the other that treat them as varieties of the same thing. But they are not. Etymologically speaking, the two names can be traced back to the same historical roots (as can macaroni), but terms like “coconut macaron” or “French (or Parisian) macaroon” are both unhelpful and misleading. It’s best to think of these as two entirely different cookies that happen to have similar-looking names.

Of course, there’s the additional problem that native English speakers know how to pronounce “macaroon” (i.e., exactly as it’s spelled), but often have trouble with “macaron,” since in French the final n isn’t articulated; rather, it’s a nasalized o sound. So English speakers usually pronounce it as “mac-a-ROHN,” which isn’t quite right but is at least closer to being correct than “mac-a-ROON.” (This discrepancy doesn’t exist in French, by the way, where a macaroon is called a congolais or rocher à la noix de coco.)

In any case, let’s reiterate the essential fact that the following items are not a macaron: