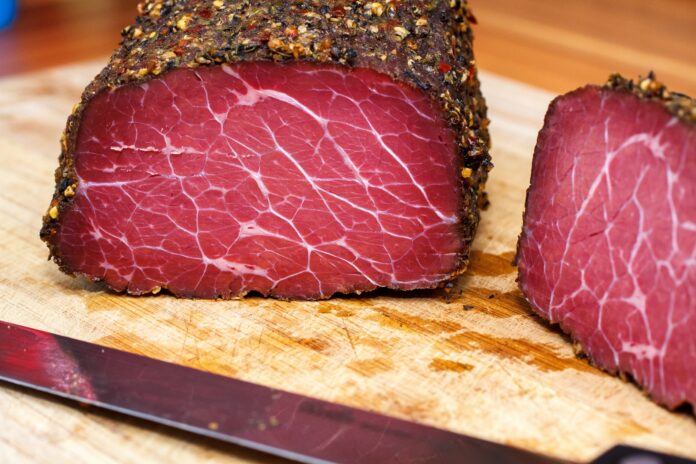 Sometimes the ideas for interesting topics come to me in rather roundabout ways. For instance, I was once trying to come up with a topic involving things that are stuffed (long story). As usual, I asked my wife, Morgen, if she had any ideas, and she handed me a book by Patricia Volk titled Stuffed: Adventures of a Restaurant Family. That was, of course, a promising sign. Then she pointed out that the author’s family had run a restaurant in New York called Morgen’s—spelled the same way as my wife’s name. A lovely coincidence. (Morgen, it turns out, is the maiden name of the author’s mother—and also the name of a beagle that Volk and her sister once owned.) Flipping a few pages ahead, my wife showed me a picture of the author’s great-grandfather, Sussman Volk, whose claim to fame had been that he “brought pastrami to the New World.” Now we were getting somewhere.

All right, I understand that ordinarily, pastrami is neither stuffed nor used to stuff anything else, but that’s not the point. The point is that I had never spent so much as five seconds thinking about pastrami before, but now that I knew there was at least one interesting story about it, I suddenly began to realize there were other questions to ponder too. Such as: What is pastrami, anyway?

Let me be candid here. I could probably count on both hands the number of times I’ve eaten pastrami in my life. It’s not that I have anything against it, I just never really think about it. For that matter, it had never occurred to me, until I started leafing through Stuffed, to wonder exactly what pastrami was; I vaguely realized that it was some sort of beef product, and that was pretty much that. But once I did start wondering, I found the answer kind of surprising.

The dictionary informs me that pastrami is a “highly seasoned cut of smoked beef.” However, there are lots of cuts of beef, and surely not every one of them that’s highly seasoned and smoked is pastrami. Or is it?

What Are You Smoking?

One way to make pastrami is to smoke corned beef. This, of course, brings up the question of what corned beef is in the first place. Curiously, corn has nothing to do with it. Perhaps a clearer term would have been “salt-cured brisket.” Brisket is the term for beef that comes from the lower chest of a cow, just behind the front legs. To make corned beef, this meat is cured—typically by soaking it in a seasoned brine for a few weeks. The grains of salt traditionally used to make the brine were about the same size as a grain of wheat (or “corn” in British English)—hence “corned” beef. When corned beef is smoked (to add flavor), seasoned with more spices—and, in most cases, steamed—it is then known as pastrami.

However, there’s more than one way to make pastrami. It need not start with corned beef—or indeed, even with brisket. Pastrami can be made from other cuts of beef, such as the plate, which is located just behind the brisket. And rather than soaking it in brine, it can be dry-cured in a salt paste. Pastrami is often, though not always, covered with spices such as cracked pepper and coriander seeds before being smoked. In fact, there are so many different ways of making pastrami that the only thing you can really say for certain is that it’s a “highly seasoned cut of cured smoked beef.” So the dictionary was pretty close after all. However, similar methods are employed to make so-called “turkey pastrami,” “tuna pastrami,” and other beefless products.

But back to Sussman Volk…he had immigrated to New York from Lithuania in 1887 and set up a butcher shop. A friend asked Volk to store a suitcase in his basement while he traveled home to Romania for a few years. In exchange for the storage space, the Romanian friend gave Volk his pastrami recipe, and Volk began selling it at his butcher shop. It became such a hit that customers asking for pastrami sandwiches (on rye bread, of course) soon crowded the small shop. He moved a couple of doors down the street to a larger location with a few tables, and thus created New York’s first delicatessen.

The term delicatessen, by the way, is German in origin and originally meant “edible delicacies.” It later came to mean the shops where ready-to-eat meats and other foods were sold. Meanwhile, the word pastrami comes via Yiddish from the Romanian word pastramă, a term apparently borrowed from Turkish and meaning “cured meat”; it may also be related to the Romanian verb a păstra (“to preserve”).

Note: This is an updated version of an article that originally appeared on Interesting Thing of the Day on October 2, 2004.