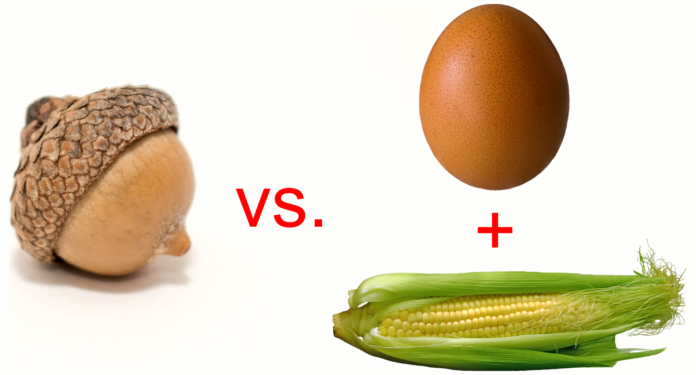 One of the very first things I remember learning in school, around age five or six, was the patriotic song “My County Tis of Thee,” which all the children would sing every morning after reciting the Pledge of Allegiance. At that point, we hadn’t yet been taught how to read—priorities, you know—so we learned the words by listening and repeating. That was fine, except that I was confused about the very last word of the song. The way I heard the last line was, “from every mountainside, let free dumring.”

I didn’t know what a dumring was, and I wondered about that, fleetingly, every time I sang the song for years afterward. Clearly it was someone, or something, that had to be “let free,” which I assumed was the same thing as “set free.” Maybe a dumring was a slave or something. I had no idea. For whatever reason, it never occurred to me that I might be singing two separate words (“dumb ring”), although that would have been equally nonsensical. I must have been well into my teens before I saw the lyrics in print for the first time, and I was utterly shocked to discover what I’d actually been singing: “let freedom ring.” In my defense, my five-year-old self wouldn’t have identified freedom as something that could ring. But I certainly did feel stupid for having misunderstood those words.

I’ve run across numerous other instances of lyrics being misheard, sometimes with very funny implications. For example, I know someone who grew up thinking the hymn “Lead On, O King Eternal” was actually “Lead On, O Kinky Turtle”! Just a few months ago, I learned that there’s a linguistic term for exactly this type of misunderstanding. It’s called a mondegreen. That term was coined in 1954 by a writer named Sylvia Wright, who wrote an article for Harper’s Magazine describing how as a child she’d misheard a line from a poem. The actual text was “And laid him on the green,” but she’d understood it to say “And Lady Mondegreen.” In context, that alteration significantly changed the meaning of the poem, as it implied the mysterious and undeserved death of this hitherto unmentioned woman. Thus, “mondegreen” itself started out as a mondegreen, and Wright went on to give several other examples of this phenomenon from music and poetry.

Mondegreens and similar errors go by many names. For example, in Dutch there’s Mama appelsap (“Mommy applejuice”), a misheard lyric from a Michael Jackson song that gave rise to a new term. That’s an example of a related phenomenon, called Soramimi in Japanese, which is the mishearing of lyrics as words in another language.

Closely related to the mondegreen, yet subtly different, is the eggcorn. The term comes from a report of a woman who referred to acorns as “egg corns,” having made a reasonable but incorrect guess about the spelling of the word based on its sound and the fact that an acorn, like a corn kernel, is a kind of seed and could be considered roughly egg-shaped. In a 2003 discussion on a linguistics blog called Language Log, linguist Geoffrey Pullum suggested that the expression “egg corn” itself was as good as any to describe this phenomenon for which no other term seemed to fit. The name stuck (sometimes spelled as two words, sometimes as a single word), and already, after only a few short years, it has been mentioned on tens of thousands of webpages. Hundreds of eggcorns have been catalogued, including “by enlarge” (or “by in large”) for by and large, “for all intensive purposes” for for all intents and purposes, “French benefit” for fringe benefit, “lack toast and tolerant” for lactose intolerant, and “tow the line” for toe the line. In most cases, the eggcorn is extremely close in pronunciation to the correct term, but it’s not a mere matter of misspelling a homophone; the eggcorn’s faulty etymology makes some sort of sense. For example, you might not be able to articulate what’s French about a “French benefit,” but one could easily imagine that if there are French cuffs and French fries, there are also “French benefits.”

There are now numerous websites that exist solely to collect mondegreens and eggcorns; like malapropisms, they’ve officially achieved linguistic fad status. But considerable confusion still exists as to what makes the two phenomena different from each other—or from folk etymology or malapropisms, for that matter. As I understand it, mondegreens are restricted to verse—either spoken or sung. So a mondegreen could conceivably be an eggcorn, but only if the mistake is etymologically defensible in some fashion. Both mondegreens and eggcorns, however, are normally thought of as mistakes by individual speakers that don’t affect the language as a whole. Folk etymology, on the other hand, is a mistake in which one language borrows a word from another, but changing it in the process to reflect the new language’s assumptions—for example, turning cucaracha into “cockroach.” And malapropisms are sort of the reverse of eggcorns; they’re primarily unintended speech errors rather than ongoing errors of comprehension.

This is perhaps an appropriate time to reiterate that although English now has yet another term that means “the wrong word,” there’s still, as far as I know, just one that means “the right word.” That term is aproposism, which I coined even before the word eggcorn appeared. Sadly, although eggcorn might be an aproposism, aproposism is no eggcorn, having so far done very little to propagate itself. It’s been a “tough road to hoe,” but I’m taking it with “a grain assault.”

Note: This is an updated version of an article that originally appeared on Interesting Thing of the Day on December 6, 2006.