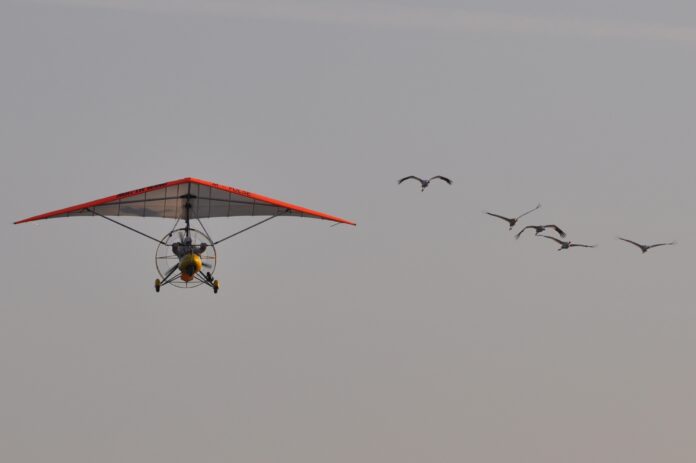 The exact techniques migrating birds use to find their way across thousands of miles to exactly the same spots year after year are only partially understood. Watching for landmarks is clearly part of it—but equally clearly, it’s not the whole story. Certain types of birds have been shown to rely only minimally on vision, in some cases apparently getting their bearings from the Earth’s magnetic field. Be that as it may, some bird species have strong migratory instincts, while others (including geese, ducks, and cranes) must be taught the way to and from their winter homes. A single demonstration is enough to program the route into a bird’s memory, but what happens when a bird never gets that first demonstration? It has no idea where to go, and as a result, its survival is threatened if it can’t find enough food when the seasons change.

This situation poses a unique problem for certain birds raised in captivity, such as the whooping crane (Grus americana)—the tallest flying bird in North America, with a height of up to 5 feet (about 1.5m) and a wingspan as wide as 8 feet (about 2.5m). By the middle of the 20th century, the worldwide population of wild whooping cranes had dipped to between 15 and 21 (depending on which source you consult), bringing the species perilously close to extinction. As a result of diligent conservation efforts, those few remaining birds were protected in the wild, and their numbers gradually began to increase; today, there are over 600 whooping cranes worldwide, including about 160 in captivity.

Of those living in the wild, however, most are non-migratory. One of the challenges of rebuilding the whooping crane population was getting birds raised in captivity to spend their summers in Wisconsin and their winters in Florida, just as other flocks had done decades earlier. Although the birds could be bred and released successfully, there was no apparent way to teach them a safe way to fly from one home to the other. Operation Migration was an attempt to solve this problem by using human-piloted aircraft to teach the birds how to migrate.

William Lishman, a sculptor and filmmaker living in Ontario, wanted to be a military pilot but, being color-blind, couldn’t pass the required vision exam. So instead, he took up hang gliding, and soon moved on to fly one of the first ultralights—an aircraft that was basically a hang glider with a frame underneath that supported a small engine and propeller. After seeing a film in which geese followed a boat, Lishman wondered if they might also follow an ultralight. After three years of experiments, he finally managed to lead a small flock of Canada geese on a flight near his home in 1988. Within a couple of years, the scientists working with whooping cranes contacted Lishman and proposed that he use the same technique to teach the cranes how to migrate south for the winter.

The first step was to try teaching a flock of Canada geese (which are not endangered) how to migrate over a long distance; that way, if anything went wrong, at least the losses would be less severe. In 1993, Lishman and fellow ultralight pilot Joe Duff led 18 geese from Ontario to Virginia, 400 miles (about 650km) away. In 1994, those geese found their own way back to Lishman’s home in Ontario, proving that the system could work. That year, Lishman and Duff founded a nonprofit organization called Operation Migration to oversee and raise funds for the much more significant effort of teaching whooping cranes to migrate. (Meanwhile, Lishman assisted in the development and making of the 1996 film Fly Away Home, a fictional story based on his life and work. Another film, the 2001 documentary Winged Migration, also used ultralights—among other aircraft—to film birds that had imprinted on the crew and their planes.)

In 1997–1998, Operation Migration performed another migration experiment, this time with sandhill cranes (a non-endangered relative of the whooping crane). One of the things they learned in this process was that cranes imprint strongly on humans. The result was that the birds were more interested in finding and staying with people than in returning to their homes—not the result Operation Migration was looking for. So they refined their techniques to make the humans as invisible to the birds as possible; the process began just after incubation.

Are You My Mother?

Even before the eggs hatched, the cranes heard recordings of an ultralight’s engine, so that they’d become accustomed to and comfortable with that sound. When the chicks hatched, the first thing they saw was a hand puppet that looked like a crane—so they’d imprint on that. All the humans who interacted with them are dressed in baggy white costumes that thoroughly disguised their form; they also carried one of the puppets at all times and avoided talking. That way, the cranes could form the impression that their “parents” are rather funny-looking, but not that they’re human. Shortly thereafter—before they’re old enough to fly—the birds were trained to follow a rolling machine that looked (and sounded) like an ultralight. Eventually they began following a real ultralight, and when it took off, the birds followed it into the air. After several weeks of training, the birds were ready for their big trip.

The first attempt to teach whooping cranes to migrate took place in 2001. Three ultralights led a flock of eight birds over 1,200 miles (about 1,900km) from Wisconsin to Florida. One of the birds died after hitting a power line in a storm, but the other seven made it safely—and returned without any assistance the following spring. So the effort expanded over the next several years. And, at least some of the birds that had learned to migrate by following ultralights had chicks of their own and taught their offspring to migrate without human assistance—exactly the hoped-for outcome.

Unfortunately, a considerable number of the birds involved in Operation Migration died—sometimes due to storms, and occasionally due to predators, hunting, or accidents. In addition, although some of the human-raised birds did go on to have chicks, the overall reproduction rate was quite low, and even when chicks were born, most of them didn’t live long enough to learn how to fly. Although the exact cause or causes of this failure are unknown, one theory is that the methods of raising whopping cranes with human proxies (using puppets, disguises, recordings and so on) disrupts their ability to learn how to nurture their own young. So even though these birds could be taught to migrate, they couldn’t be taught how to successfully raise and protect a family. As a result, in 2016, the U.S. Fish and Wildlife Service decided to discontinue the ultralight-guided migration training.

Operation Migration still works with whooping cranes, tracking them and assisting them in ways that don’t involve ultralights or human rearing. After all, the species is still endangered and incredibly fragile. But even though the ultralight program didn’t provide a complete or lasting solution, it did help—and it proved that humans can teach birds how to migrate.

Note: This is an updated version of an article that originally appeared on Interesting Thing of the Day on May 15, 2005.