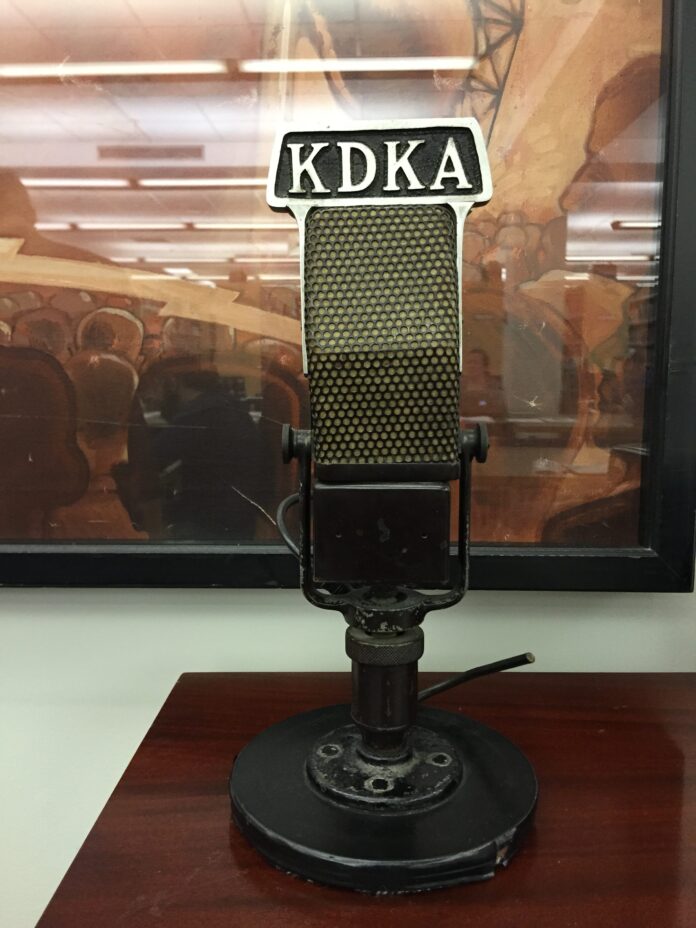 When I was growing up in western Pennsylvania, my main experience of the radio was during the winter months, when my sister and I would listen eagerly on snowy mornings to find out if school had been cancelled that day. The station we usually listened to was KDKA, which happened to be both the first commercial radio station in the country and a notable exception to the rule that all radio stations in the eastern U.S. had call letters that started with W. I always had the vague idea that these two facts had something to do with each other, but as I was not a habitual radio listener, I never thought that much about it. It turns out that not-thinking-that-much-about-it was a prominent theme in the history of radio call letters.

Around the turn of the 20th century, radio was brand new and was originally used as a wireless telegraph, with messages transmitted in Morse code. To shorten the number of dots and dashes needed to identify each party, operators of radio stations on both ships and land adopted the practice already common in telegraphy to begin messages with short (one- to three-letter) identifiers—call letters (or call signs). Without a central authority to hand out call letters, users chose their own, and frequently chose ones already in use. By 1906, an international convention established that every station should have a unique, three-letter call sign, but left vague the matter of how that uniqueness was to be ensured.

To help eliminate the confusion, the Bureau of Navigation, part of the U.S. Department of Commerce, began assigning three-letter call signs to American ships in early 1912, using the K prefix for ships on the Atlantic and Gulf coasts and W for ships on the Pacific coast and the Great Lakes; the reasons for choosing K and W, if any, are unknown. Shortly thereafter, at the London International Radiotelegraphic Convention, ranges of letters were assigned to each of the participating nations; in addition to W and most of the K range, the U.S. got the N prefix (to be used only by the navy).

On May 9, 1913, the U.S. Department of Commerce issued a 4-page document titled Radio Call Letters, which laid out the official policy in some detail. A couple of paragraphs bear particular mention:

From June 1920 until April 1921, the Bureau of Navigation decided, once again for unknown reasons, to use K call letters for almost all new licensees, both marine and land-based. It so happened that during this period, two commercial radio station—both in Pittsburgh, Pennsylvania—applied for call letters. The first was given the designation KDKA, which happened to be next on the list (and, coincidentally, between the call letters for two ships, which used KDJZ and KDKB). KDKA began broadcasting in November, 1920. Meanwhile, a second station that had been broadcasting since 1919 under the amateur call sign 8ZAE received the call letters KQV in January 1921, but as a noncommercial station. Its commercial license (on a different wavelength, newly designated for entertainment) went into effect in January 1922.

By the time the next commercial station was licensed, the official written policy was once again being followed, but KDKA and KQV were not required to change their call letters.

Where the West Begins

Astute readers may notice that Pittsburgh is not particularly close to the east coast. Closer than to the west coast, certainly, but the vague designations of “east” and “west” were soon to be put to the test. Exactly where should the Bureau of Navigation draw the line? For several years the boundary was a line running down the western borders of North Dakota, South Dakota, Nebraska, Kansas, Oklahoma, and Texas. In January 1923, the Bureau of Navigation moved the dividing line to the Mississippi River, quite a bit to the east. Once again, stations in that zone that had already received what would now be considered an incorrect designation were not required to change.

Apart from KDKA, KQV, and stations assigned before the boundary shift of 1923, though, there are a number of other exceptions to the rule. Some exceptions were made by special request, some due to a station’s relocation, and some apparently by mistake. But all call letters, anomalous or not, were permitted to stick indefinitely, except in certain cases of ownership change.

In the late 19th century and the first decade and a half or so of the 20th, call signs for both ships and land-based stations had only three letters. But as the number of ships and stations increased, the pool of available combinations began to run out. Adding a fourth letter was the obvious solution, though if a ship sank or was otherwise put out of commission, its call sign was sometimes “recycled” by a land-based station. By 1930, only four-letter call signs were available. Meanwhile, authority to assign call letters moved in 1927 from the Bureau of Navigation to the newly formed Federal Radio Commission, which was replaced by the Federal Communications Commission (FCC) in 1934.

While I lack an awareness of local radio stations and their call letters due to insufficient exposure, I lack an awareness of local TV stations and their call letters due to DVRs and streaming. Not only do I rarely have any idea what TV station (or even network) I’m watching, I have only the vaguest idea of the days or times my favorite shows are actually on, because as far as I’m concerned, they’re on whenever I want them to be. Expressions like “stay tuned” or “don’t touch that dial” seem quaintly anachronistic, as does the whole notion of network loyalty. My loyalty, such as it is, goes to particular shows or personalities, and that appears to be a common trend. So whatever value call letters continue to have, it isn’t in building brands.