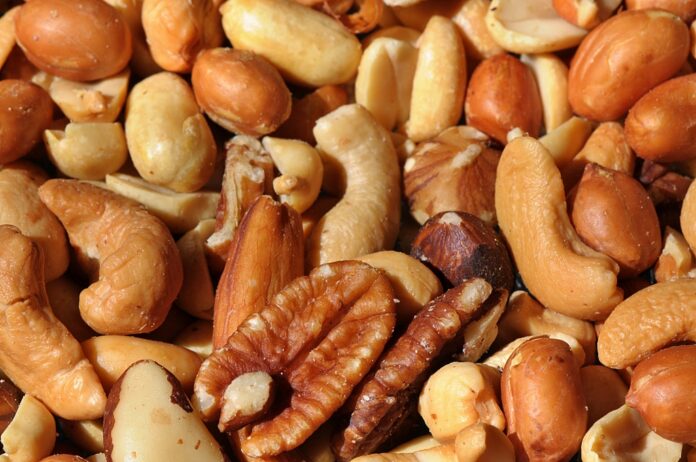 Warning: This article contains tree nuts, peanuts, and other allergens. Do not lick the screen.

Having grown up as an English speaker in the United States, I had, for many years, a well-defined linguistic category called “nut,” and it was always fairly obvious to me what was in this category: pretty much anything edible with “nut” in the name (walnuts, peanuts, hazelnuts, and so on—the coconut was admittedly a problematic outlier), plus almonds, pecans, cashews, and a number of others. These things were all nuts in my book because they all had a similar texture and function, and I didn’t particularly care where they came from.

Then I started hearing people drawing distinctions between “tree nuts” and “groundnuts,” and even more confusing, saying things like, “You know, the peanut isn’t actually a nut.” Still later, when I lived in France for a while, I discovered that the French have an entirely different way of categorizing the things I called nuts. There are terms like noix de cajou (cashew) and noix de coco (coconut), but noix all by itself usually refers to a walnut, and though it can sometimes refer generically to “nuts,” the group of foods thus identified would not include, for example, peanuts (cacahuètes or arachides, depending on which dialect of French you speak). My well-worn linguistic category got so mixed up that I started to think I was…mentally unwell.

Although I am now older and wiser, I realized (while contemplating National Pecan Day) that I could not, in fact, explain what was and was not a nut, or what the different classifications of nuts and nut-like objects are. So I looked it up, and I now present my findings as a public service. Go nuts!

To a botanist, the word nut has a precise meaning: a hard-shelled, indehiscent fruit containing a single seed (where indehiscent means it doesn’t open to release the seed when it matures). So, botanically speaking, acorns are nuts, as are chestnuts, hazelnuts, and kola nuts. Most other true botanical nuts are inedible (or, at least, very seldom consumed in western cuisine).

A drupe is similar, except that there’s a fleshy layer surrounding the hard shell, which in turn contains the seed. Almonds, cashews, coconuts, pecans, pistachios, and pecans—a set of fruits commonly referred to as “tree nuts”—are examples of drupes.

So: nuts and drupes are both seeds, but drupes have an extra, outer layer.

Most of us are not botanists, however, and even botanists have to eat. So when it comes to culinary uses—and, indeed, everyday English—the word nut has a broader range of meanings. It includes not only botanical nuts and drupes, but also other edible seeds with similar characteristics. One way to classify such seeds is as gymnosperm seeds (seeds without enclosures) or angiosperm seeds (seeds found inside a larger fruit). By that categorization, pine nuts and ginkgo nuts are gymnosperm seeds, while Brazil nuts, macadamia nuts, and peanuts are angiosperm seeds. However, the structures containing Brazil nuts, macadamia nuts, and peanuts are quite different from each other, and there are thus other ways of classifying what goes with what.

Yet another twist is that the peanut (or groundnut) is a type of legume, or bean, which puts it in the same family as peas and soybeans. (Soybeans, by the way, can be considered culinary nuts too, while peas cannot.) But in French, the word legume simply means “vegetable,” while the word for what we call a legume is légumineuse. Totally obvious and self-explanatory, non?