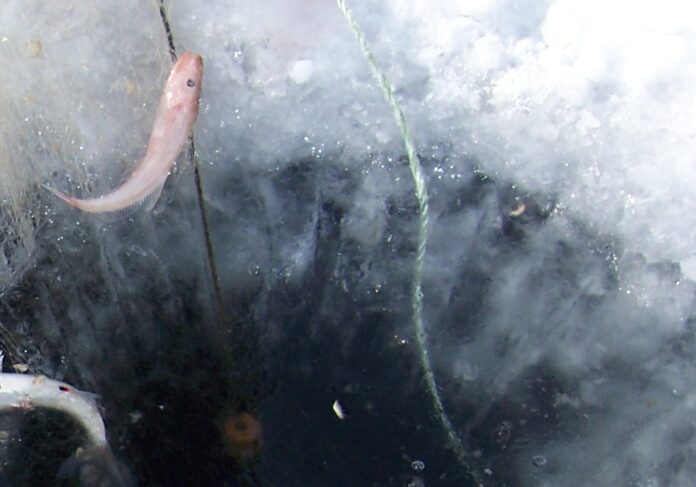 Lake Baikal, located in the southern part of Siberia near the Mongolian border, is interesting for a number of reasons, and I plan to write about it in more detail here in the future. But today, I want to say just a few words about one of the lake’s most unusual and plentiful inhabitants: a fish known as the golomyanka, or Baikal oilfish, which lives only in this one lake. In fact, the name applies to two species of Comephorus: the big Baikal oilfish (Comephorus baikalensis) and the little Baikal oilfish (Comephorus dybowskii), but we are concerned here specifically with the big golomyanka (relatively speaking—it’s only about eight inches, or 21cm, in length).

The golomyanka lives in quite cold water (remember, this is Siberia) at depths of up to a mile (1.6km), and is mostly solitary. (Sorry, but it must be said: it’s too cool for school.) It’s almost entirely translucent, lacking both scales and a swim bladder (the organ most fish use to regulate their depth). But the fish’s body is, astonishingly, nearly 40% fat by weight, and that fat is what helps it survive and navigate in such cold water, at such great depth, without a swim bladder.

Golomyankas also constitute nearly the entire diet for the local Baikal seals. Apparently, they’re not much good as food for people, however, and that’s partly due to the fact that because of the golomyanka’s high fat content, once you cook it, very little is left except the spine and oil; hence the name. (The oil is used in lamps and for medicinal purposes.) It’s also widely reported that a golomyanka left out in the sun will melt into a puddle of goo, though that—like other odd stories about the fish—may be an exaggeration. There’s no telling what the myth’s scale may be.