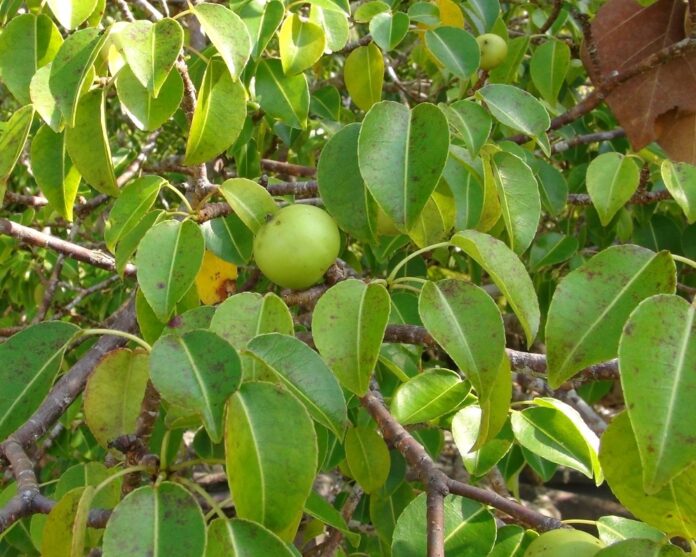 Perhaps you were taught, as I was, to identify and avoid poison ivy, because touching it can give you an awful, itchy rash. That’s nasty, for sure, but on the scale of plants that are harmful to humans, poison ivy is maybe a 2 or 3. A tree found in Florida, the Caribbean, Mexico, and parts of Central and South America is more like an 8 or 9 (and yes, there are some 10s out there). Let me tell you a bit about the manchineel tree (Hippomane mancinella).

From a distance (the only location you should ever be in relation to it), the manchineel tree looks unexceptional, with shiny green leaves and green or yellow fruits about the size of a tangerine that look vaguely like apples. The tree is typically found near the coast in tropical areas of the western hemisphere, and its fruit is sometimes referred to as the “beach apple” because of its tendency to drop off and roll onto nearby beaches. But that nickname sounds adorable, and the manchineel tree is anything but. Its other common name, the “Tree of Death,” is closer to the mark.

Here are some of the things you must never do if you encounter a manchineel tree:

In short, this tree is nothing to mess around with, and manchineel trees found in areas frequented by tourists often have signs on them gravely warning of the dangers. And yet, just as goats can safely and happily munch on poison ivy, there’s at least one animal—the striped iguana—that is apparently immune to the tree’s toxic substances, and even feeds on its fruit. I’ve also read that the tree’s wood is prized for furniture, although I can barely imagine going through the extraordinary precautions required to get to the point where the wood could be handled safely.

The manchineel tree is endangered, but it doesn’t exactly lend itself to conservation. I think a nice thick stand of manchineel trees around a supervillain’s secret lair would be more effective (and unobtrusive) than barbed wire, but then we’d need more supervillains. It’s a tricky problem.

You can read more about the manchineel at Atlas Obscura and Mother Nature Network.