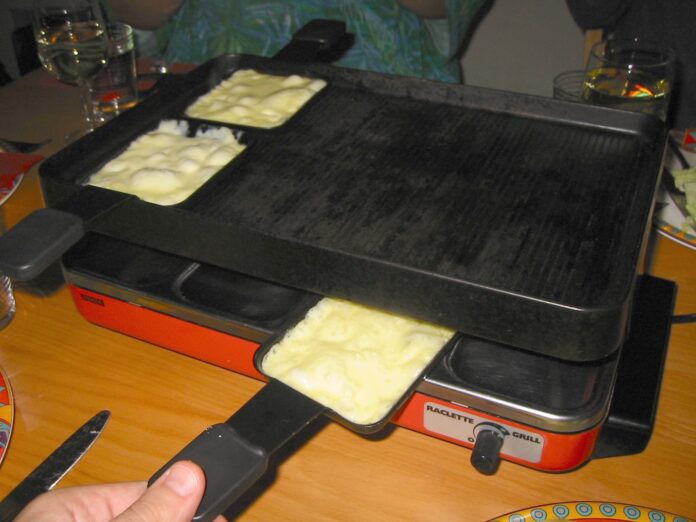 The term cheesy in English can, and sometimes does, mean “containing cheese.” More often, however, it’s used to mean “cheap, shoddy, or culturally infelicitous.” Sometimes these quite different meanings come together, typically in reference to a ’70s-style electric fondue pot. Raise your hand if there’s one in your cupboard that you received as a gift and haven’t used in at least five years. That appears to be…yep, pretty much all of us. OK, put your hand back down; you’ll need it to scroll. But please, for a moment, set aside any prejudice you may have about Swiss tabletop cheese-melting devices. Today I’d like to tell you about another one that is both more (in the good sense) and less (in the bad sense) cheesy.

There is no such thing as “Swiss cheese” in the sense that Americans think of it—American Swiss cheese is a pale knockoff of Emmenthal, just one of hundreds of varieties of cheese produced by Switzerland’s numerous (and apparently quite happy) cows. And for some of these cheeses, only one method of serving is considered appropriate—Tête de Moine must be shaved on a Girolle; Gruyère is typically melted in a fondue pot. But there’s another type of cheese that requires an exacting preparation ritual, though it’s little known in North America. The cheese is called raclette—a semi-soft, off-white, fairly mild cheese that melts extremely well.

Raclette usually comes in rounds (or “wheels”) that are about an inch and a quarter (3cm) thick and eight inches (20cm) in diameter—though you can find much larger wheels too. The cheese has been produced for centuries in the mountainous Swiss canton of Valais. According to legend, shepherds and herdsmen, short on ingredients, once heated wedges of raclette by an open fire, then scraped off the top layer of melted cheese onto pickles and boiled potatoes. This is, in fact, how raclette got its name: from the French verb racler (“to scrape”). In time the practice was refined, until it acquired an air of sophistication that has stayed with it to this day.

A modern raclette meal uses the same basic ingredients, but trades the campfire for handy electric heaters. There are two types of raclette cookers. The raclette grill is by far the most common. It looks very much like any other tabletop grill, except that underneath the heating elements is a platform that holds six or eight individual trays. Participants put a hunk of cheese in a tray, pop it under the heat, wait a few minutes for it to melt, then use a special spatula to scrape it onto their plates. The top of the grill, meanwhile, can be used for meat, vegetables, crêpes, or anything else. A more modern design attempts to replicate the campfire experience more closely. A quarter or half round of raclette is held vertically by a small bracket, while an oblong quartz lamp shines down on the edge of the cheese. When you’re ready to serve it, you swivel the cheese away from the lamp and scrape off a layer with a special knife.

Getting Into a Scrape

The melted cheese is usually accompanied by boiled potatoes, cornichons, or pickled onions. However, the specifics of raclette etiquette are apparently a subject of much debate in Switzerland. My Swiss friend Eveline insists that the only proper way to serve the raclette is to sprinkle paprika, pepper, or both onto the melted cheese, then scrape it directly onto the potatoes. Her husband, Peter, on the other hand, says that this is an egregious violation of tradition—that spices must never be used, and that furthermore the cheese should be scraped onto an empty portion of the plate and combined with the potato only on one’s fork. I witnessed a heated discussion on this topic, but luckily the couple avoided a meltdown.

When it comes to the proper method of eating cheese, I understand that emotions can run high. From my earliest days of childhood, I put ketchup on macaroni and cheese. When I got to elementary school and did this in the cafeteria at lunchtime, my classmates regularly complained to the teachers that I was doing it just to “gross them out.” I was bewildered by this accusation; how could anyone enjoy macaroni and cheese without ketchup? I said, “You eat spaghetti with tomato sauce and cheese, right?” Heads nodded. I said, “This is the same thing, just in different proportions.” My argument, which I thought quite logical and persuasive, did not move my audience. Later, however, I lived in Canada for a few years and discovered to my delight that ketchup on macaroni and cheese was as normal there as gravy on French fries. (That is to say, completely normal, in case you were wondering.) I can’t imagine anyone putting ketchup on raclette, but I wouldn’t complain—I’d be too busy scraping.

Note: This is an updated version of an article that originally appeared on Interesting Thing of the Day on August 30, 2003, and again in a slightly revised form on June 13, 2004.