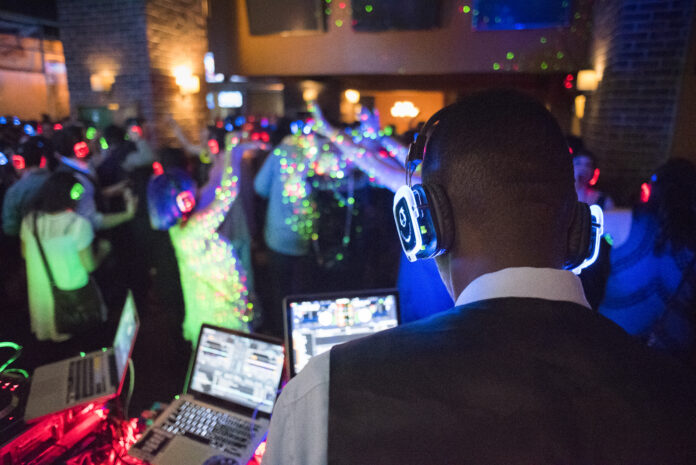 On our way home from the theater after seeing an X-Men movie back in the mid-2000s, Morgen and I kept finding ourselves surrounded by unusually noisy people—in the lobby, on the street corner, in the subway station. We were attempting to discuss the film, but we could barely hear each other. Every time this happened, I tried to move away to a quieter spot; noise has its place, but when I’m trying to think or carry on a conversation, I prefer relative silence. As we reviewed some of the fictional mutants and their super powers, I said, “If I were a mutant, they’d call me Silento. My super power would be the ability to create a large bubble of silence all around me.” In my book, that beats being able to throw balls of flame or have metal claws pop out of my hands.

I have always been baffled at the fact that people so frequently go to noisy parties, bars, clubs, and restaurants with the apparent intention of getting to know each other or spend quality time together. How is that supposed to work? How can you have a worthwhile conversation with someone when you must yell over loud music, not to mention all those other people yelling their own conversations at each other? Perhaps my telepathic powers are insufficiently developed, but as an ordinary human, it seems more sensible to me that if you want to talk to someone, you’d go to a place where you can hear and be heard.

Shortly after the episode I recounted above, I found out about a phenomenon that had recently begun to catch on: quiet parties, where the only rule was “no talking.” I wrote about it here, explaining what a delightful idea it sounded like. I’ll tell you about it again, but first a spoiler: that trend pretty much evaporated, and the term “quiet party” now means something very different from what it originally did…though it’s still kind of interesting.

These Go to Zero

The idea for quiet parties (in the original sense) came from two New Yorkers, artist Paul Rebhan and musician Tony Noe, who got frustrated trying to find a bar where they could have a quiet conversation in 2002. (Sounds familiar!) They invented the quiet party partly for practical reasons and partly as a sort of participatory performance art. Despite—or perhaps because of—New York’s reputation for ubiquitous noise, the parties were an instant hit.

Loud music, yelling, and cell phone use were prohibited at quiet parties; sometimes there’d be soft music in the background and sometimes not. Whispering was allowed in designated areas, and occasionally, quiet parties even permitted the exchange of text messages and email. But on the whole, participants relied on written notes, mime, and body language to convey their messages. Once partygoers got over the initial discomfort of writing instead of talking, they often found that passing notes makes was easier and less intimidating to approach strangers. And it was often quite entertaining: there was no rule against giggling or gasping.

You’ll notice, of course, that I speak of quiet parties in the past tense. At one time, there was a Quiet Party website listing quiet parties that were officially sanctioned and promoted by Rehban and Noe. They took place at venues that had been specially reserved for the evening, with hosts who explained how it works, pass out pens and paper, and enforce the “no talking” rule. These events, which were held around the world, tended to attract mainly singles; those looking for love at a quiet party were said to be practicing silent dating.

But for whatever reason, this meme ran its course, the website went away, and Rehban and Noe went on to do other things. Although there’s nothing stopping anyone from holding a quiet party of that type now, at some point, the term “quiet party” quietly adopted an entirely different meaning. What that term—and others like it, including silent party and silent disco—typically means now is a dance party where DJs play music through wireless headphones worn by each guest, as opposed to through loudspeakers. So a visitor walking into the room without the right headphones would hear very little, while each participant can have the music as soft or loud as they prefer.

I guess the option to turn one’s own music down or even off is nice, as is the opportunity to engage in conversation with someone else if they’re willing to do the same. (If not, then it’s just yelling over both people’s headphones—hardly an improvement!) But new-style “quiet” parties, emphasizing as they do constant audio stimulation and very much deemphasizing actual communication, are very nearly the opposite of what I loved about the original quiet party idea. What a pity.

I think I can safely say that no one has ever had to yell to be heard at one of my parties, but I’d certainly be game to try complete silence—I mean, without the headphones. Perhaps one day in the future, if truly silent parties make a resurgence and become the norm, the world will no longer need Silento. I’ll be only too happy to hang up my cape.

Note: This is an updated version of an article that originally appeared on Interesting Thing of the Day on June 7, 2006.